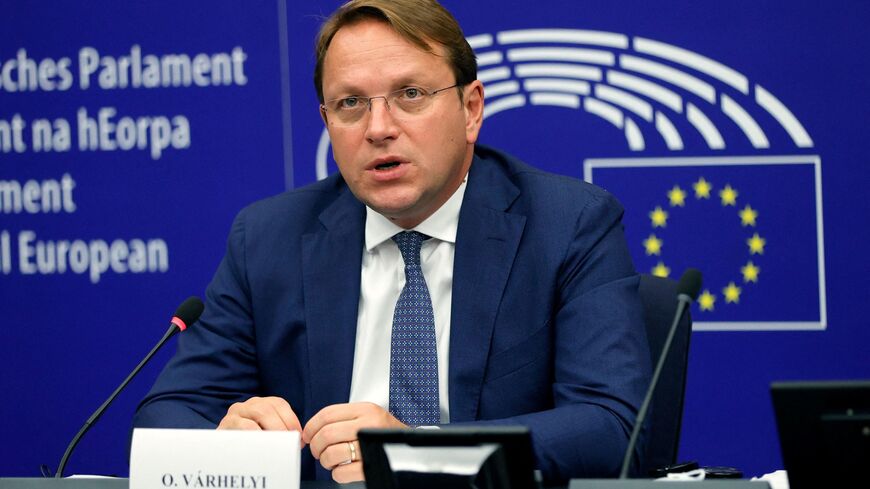 Oliver Varhelyi, European commissioner for neighborhood and enlargement, talks during a press conference on the enlargement package 2021 at the European Parliament in Strasbourg, France on Oct. 19, 2021. - RONALD WITTEK/POOL/AFP via Getty Images

Oliver Varhelyi, the EC’s Commissioner for Neighborhood and Enlargement, said Turkey had not “credibly addressed” EU concerns over the ongoing deterioration in rule of law, fundamental rights and the independence of the judiciary.

“The underlying facts leading to the standstill in Turkey’s accession negotiations still hold,” Varhelyi said in a statement Tuesday.

“It would be in everyone’s interest if the EU, taking into account our common general interests, sees Turkey as a candidate country that is negotiating, not as a partner with whom to have daily give-take relations,” the ministry said in the statement.

For the first time, the Commission’s report questioned whether Ankara was serious about implementing EU-backed reforms. While Erdogan’s government has introduced judicial reform packages and a human rights action plan, Ankara has yet to deliver concrete actions that would affirm commitments to rule of law, said Ilke Toygur, an analyst of European Affairs at the Elcano Royal Institute and a fellow at the German Institute for International and Security Affairs.

Such measures might include implementing rulings by the European Court of Human Rights for the immediate release of imprisoned Turkish philanthropist Osman Kavala and former Peoples’ Democratic Party co-chair Selahattin Demirtas, Toygur said.

“In a period where Turkey-EU relations are basically frozen or even worse, it’s a bit unrealistic to expect there were groundbreaking steps taken for Turkey’s alignment with the EU,” Toygur told Al-Monitor, saying the report should be seen as “a technical follow-up for a framework that is not necessarily functioning right now.”

Since 2005, Turkey has pursued EU membership, though its bid stalled in recent years and has faced increased scrutiny, particularly in the wake of mass purges and a crackdown on Erdogan’s political opponents following a 2016 coup attempt.

EU-Turkey relations were further strained in 2019, when Ankara began conducting energy prospecting missions in the eastern Mediterranean, raising tensions with both Greece and Cyprus regarding overlapping claims on territorial waters and natural resources in the region.

Feuds in eastern Mediterranean have since largely subsided, a move welcomed by the EC in its report. This spring, the commission unrolled a positive agenda, offering to advance Customs Union modernization talks on bilateral trade with Turkey on the basis of continued de-escalation of maritime boundary disputes.

Now with the accession process on pause, EU officials seek to maintain alternative avenues to advance shared interests with Ankara. In addition to Customs Union talks and migration management, Turkey’s recent ratification of the Paris Climate Agreement “has the potential to create some synergy between Turkey and the EU,” Toygur told Al-Monitor.

She added that the EU’s August decision to recognize Turkish COVID vaccine certificates “sounds rather niche, but I think it was a demonstration of good faith.”

In the assessment of common security policy, the commission reported Turkey maintained “a very low alignment rate of around 14 percent” with the bloc, since Turkey’s “increasingly assertive foreign policy continued to collide with EU priorities,” particularly in its support for military action in the Caucasus, Iraq, Libya and Syria.

“I remember the times when [common security alignment] was in the high seventies, when Turkey associated itself with the EU’s foreign policy,” Sinan Ulgen, chairman of the Istanbul-based Center for Economic and Foreign Policy Studies, told Al-Monitor. “I think that’s quite remarkable.”

Ulgen also criticized the report for repeating talking points from the Greek and Cypriot governments regarding territorial spats in the eastern Mediterranean.

“It’s as if everything depends on Turkey, but in actual fact it doesn’t,” Ulgen told Al-Monitor. “The EU also has to have the political willingness to move forward.”