With EU accession talks frozen, the bloc’s foreign policy chief faces the tough task of creating a new negotiation table for the bloc and Ankara to address rising tensions. 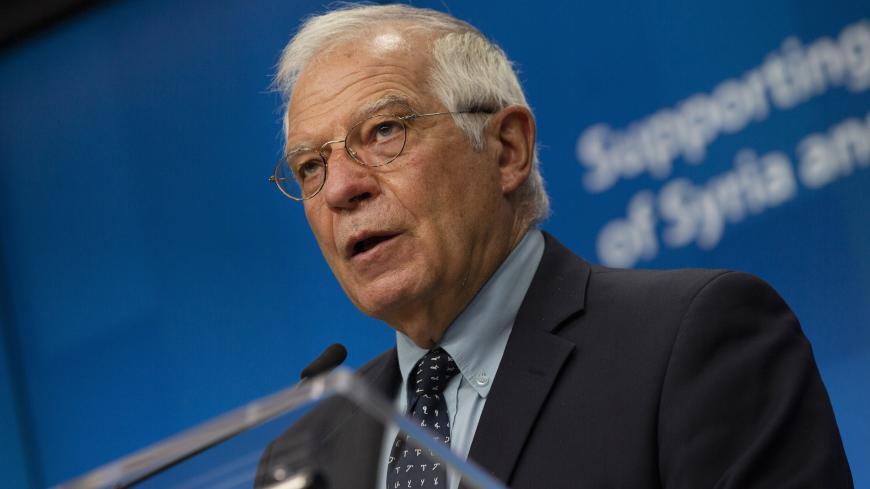 European Union Foreign Policy Chief Josep Borrell speaks during a media conference after a meeting titled Supporting the Future of Syria and the Region, in videoconference format at the European Council building in Brussels on June 30, 2020. - VIRGINIA MAYO/POOL/AFP via Getty Images

From migration to the Libyan war and conflicting resource claims in the eastern Mediterranean, Borrell sought to mediate rising EU-Turkey tensions on multiple fronts as some European leaders have criticized Ankara for taking increasingly unilateral actions at the bloc’s expense.

“Currently the situation is far from being ideal,” Borrell said in a joint press conference with Turkish Foreign Minister Mevlut Cavusoglu Tuesday. “There are many serious issues that require our immediate attention.”

The visit comes ahead of two key debates next week by the European Parliament and the EU Foreign Affairs Council regarding Turkey’s recent actions in the region after French officials voiced the possibility of imposing new sanctions on Ankara for its gas drilling activities near Cyprus.

Speaking Tuesday, Cavusoglu hit back at such threats, which have taken on a new urgency after a June 10 standoff between the French and Turkish ships in the Mediterranean Sea resulted in France pulling out of a naval exercise.

“We observe that Turkey will be on the agenda of the EU in the coming days,” Cavusoglu said at the press event. “Taking decisions against Turkey will not resolve the existing problems; on the contrary, it will deepen them. If the EU takes additional measures against Turkey, we’ll have to respond.”

The row comes after weeks in which French and Turkish officials traded insults publicly and questioned each other’s commitments to the NATO alliance. The two nations back opposing sides in the Libyan war, where Turkish support helped turn the momentum in favor of the UN-recognized Tripoli government.

Now Borrell heads back to Europe to tend to the difficult task of mitigating EU-Turkey discord, though he does so without the aid of the bloc’s traditional platform for mitigating ties with Turkey: the EU accession process.

With membership talks stalled since at least 2016, analysts say Borrell and EU leaders must create a new negotiating table for Ankara and Brussels to address shared interests and sort out regional disputes.

“It is very clear that Turkey-EU relations are in a stalemate and accession negotiations are frozen,” Ilke Toygur, an analyst of European Affairs in Elcano Royal Institute, told Al-Monitor. “This is a very fragile status quo, and any development in the eastern Mediterranean or any moves in Libya may have severe consequences,” she added.

Most prominently represented by a 2016 agreement established to support more than 3.7 million Syrian refugees in Turkey while reducing informal entries into Europe, the migration issue resurfaced in February when thousands of asylum-seekers streamed toward the Greek border as Ankara sought EU support for its Syria policy.

While the incident angered many European lawmakers, Turkish leaders have criticized the bloc for failing to upgrade the EU-Turkey customs union and follow through on a visa liberalization scheme for Turkish nationals as outlined in the 2016 deal.

With leaders on both sides working to update migration policies, Toygur said the EU has maintained its leverage on Turkey primarily through economic ties, which can provide avenues for redefining bilateral relations, particularly following the coronavirus outbreak.

“The EU is by far Turkey’s No. 1 imports and exports partner and a source of direct investments,” Toygur told Al-Monitor, adding, “At this time, there’s a debate in the European Union on the repositioning of supply chains with the COVID-19 crisis. There’s a desire to bring supply chains and the production of goods closer to home, and Turkey is a good candidate for this.”

A greater focus on economic ties fits the narrative analysts have voiced in recent years in which EU-Turkey relations are defined as increasingly transactional and strategic. Yet even within such a framework, Sinem Adar, an associate at the Center for Applied Turkey Studies in the German Institute for International and Security Affairs, said Ankara and Brussels appear to disagree over how to approach the array of issues encompassing bilateral ties.

“If you read between the lines, I think what Cavusoglu was saying was that Turkey is pushing for more compartmentalization, as in separating political issues from technical issues, i.e., separating the East Med from discussions of migration cooperation,” Adar told Al-Monitor, regarding the Turkish foreign minister's comments on Tuesday.

She added, “Borrell was responding in a way that [suggested] the EU was seeking more of a comprehensive approach. The EU cannot separate these issues from one another.”

The pressure on Borrell is high, as Greek and Cypriot leaders have joined France in opposition to Turkish foreign policy, with Cypriot President Nicos Anastasiades defining Turkey Tuesday as “an agitator that’s seeking to dominate the entire eastern Mediterranean.”

Still, Ankara maintains a number of more hospitable relations with EU member states, including Italy, whose defense minister is scheduled to visit Turkey in the coming week. Officials in Rome have expressed support for Ankara’s intervention in Libya.

Regardless, Adar noted Turkish officials have taken a number of controversial stances over the years in their approach to EU relations, and while many serve domestic interests, their consequences on the international stage remain to be seen.

“I think with Turkey, first with the opening of the border, then with the Hagia Sophia debate, it’s not just about unilateralism, but I think they are going against diplomatic norms, and I think they kind of do it purposefully to make the point that Turkey’s an independent actor and isn’t afraid of anyone or anything,” Adar told Al-Monitor.

by Murielle KASPRZAK and Joseph SCHMID | AFP | May 26, 2022
END_OF_DOCUMENT_TOKEN_TO_BE_REPLACED