During a visit to Ankara Monday, NATO Secretary General Jens Stoltenberg voiced support for de-confliction efforts between Turkey and Greece in the eastern Mediterranean while calling for a cease-fire in the southern Caucasus. 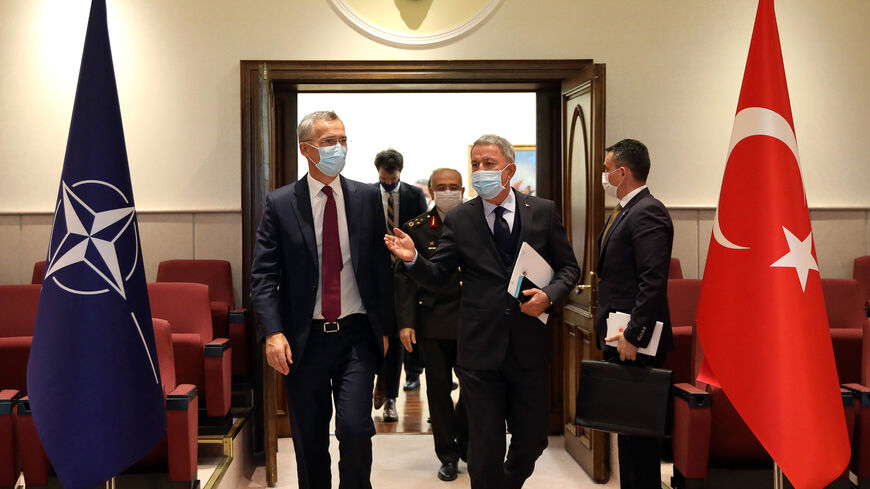 On Thursday, Stoltenberg announced the establishment of a 24/7 hotline between Turkey and Greece to reduce the risk of incidents and accidents between the NATO allies following disputes over contested areas of the eastern Mediterranean, where Turkish research ships escorted by Turkish navy vessels had conducted gas exploration activities before pulling back last month.

“The mechanism was achieved through the constructive engagement of Turkey and Greece at NATO Headquarters,” Stoltenberg said at a press briefing in Ankara Monday. “I welcome this and pay tribute to both allies for their efforts. … The de-confliction mechanism can help to create the space for diplomatic efforts.”

Stoltenberg addressed reporters with Turkish Foreign Minister Mevlut Cavusoglu, who said the pair had discussed developments in conflicts ranging from Libya to Syria and Afghanistan.

“We, of course, do not want an accident to happen between allies,” Cavusoglu said at the press briefing before thanking Stoltenberg’s leadership in defusing regional tensions by bringing Greek officials to the negotiation table with Ankara.

Stoltenberg also reiterated calls for a cease-fire between Armenia and Azerbaijan amid ongoing fighting in the contested Nagorno-Karabakh region, urging Turkish officials to use their “considerable influence to calm tensions.”

The visit comes after a European Union summit concluded Friday in which bloc leaders said they would impose sanctions on Ankara if Turkish “provocations” continue in the eastern Mediterranean. While Turkish officials stated such a move would prove counterproductive, analysts said NATO-led mediation efforts between Turkey and Greece could prove more effective, as the allies stand on equal footing in the coalition, whereas EU-led mediation is more likely to favor Greece as an EU member state.

“NATO is a more symmetric institution in relation to both sides,” Ilke Toygur, an analyst of european affairs at the Elcano Royal Institute and adjunct professor of political science at Carlos III University of Madrid, told Al-Monitor.

She added, “This gives the institution a comparative advantage for managing de-escalation in comparison to the European Union, where the situation is more asymmetric.”

Turkish and Greek military delegations have been conducting negotiations at the NATO headquarters in Brussels since Sept. 10. Though the seventh round of these talks was delayed for technical reasons Monday, mediators said they expected de-escalation efforts to continue.

In regard to the EU de-escalate efforts, navigational data indicated Monday the Turkish Yavuz drillship was withdrawing from waters near Cyprus, where it had been operating in recent weeks. The news comes after the Republic of Cyprus withdrew its veto Friday on EU sanctions for Belarus over the state’s crackdown on pro-democracy protests.

The European Commission’s foreign policy spokesperson Peter Stano said the drillship’s relocation was an “important signal” that could help facilitate resolutions for longstanding disputes regarding overlapping territorial claims in the region.

“The departure constitutes another welcome step towards de-escalation in the eastern Mediterranean,” Stano said Monday. “We hope for similar and further moves in this direction,” he said.

Still, another Turkish research vessel, the Barbaros Hayrettin Pasa, remained off the southeastern coast of Cyprus Monday. In reviewing the outcome from last week’s summit, Toygur said the European Council appeared to be moving further toward a transitional relationship with Turkey.

“There were no mentions of accession negotiations, democratic backsliding or rule of law in the country in the [council’s] conclusions,” Toygur told Al-Monitor. “What was offered was a simple give and take: Abstain from unilateral actions which run counter to the EU interests and the sovereign rights of EU member states, and in return we will launch a positive political EU-Turkey agenda.”

Another issue raised during Stoltenberg’s visit was Turkey’s 2019 purchase of Russian-made S-400 missile defense systems. The NATO chief said the S-400s may pose a risk to allied aircrafts and could not be integrated into NATO air and missile defense systems before urging Turkey to find “alternative solutions.”

Speaking at the press briefing, Cavusolgu reiterated Ankara “had to buy the S-400 because we were not able to get the Patriot or another air defense system from our allies,” a claim some observers have disputed.

“It sounds like it’s an ongoing negotiation in the background,” Sinem Adar, an associate at the Center for Applied Turkey Studies in the German Institute for International and Security Affairs, told Al-Monitor.

Though Turkey has kept the S-400s over the last year without being subjected to US sanctions on the condition the missile system remains inactive, unconfirmed reports on Monday suggested US Secretary of State Mike Pompeo had visited Greece last week after “indications” Turkey had activated S-400 radars on Aug. 27.

If true, the move could trigger sanctions on Ankara under the Countering America's Adversaries Through Sanctions Act, also known as CAATSA, but evidence of the event remains unsubstantiated at the time of reporting.

“We should think of all these conversations, particularly the eastern Mediterranean conflict, within the larger context of Turkey’s increasingly militarized foreign policy and the decreasing patience in the EU together with the direct challenge to EU interests,” Adar told Al-Monitor.

Following the press briefing Monday, Stoltenberg was scheduled to meet with Turkish President Recep Tayyip Erdogan on the same day. The NATO chief will then meet with Greek Prime Minister Kyriakos Mitsotakis and Greek President Katerina Sakellaropoulou in Athens Tuesday.