Ahead of a European Council summit in which EU leaders will discuss sanctions on Ankara this week over energy prospecting activities in the eastern Mediterranean, Turkish President Recep Tayyip Erdogan reiterated calls for dialogue, urging bloc members not be swayed by Greek and Cypriot agendas. 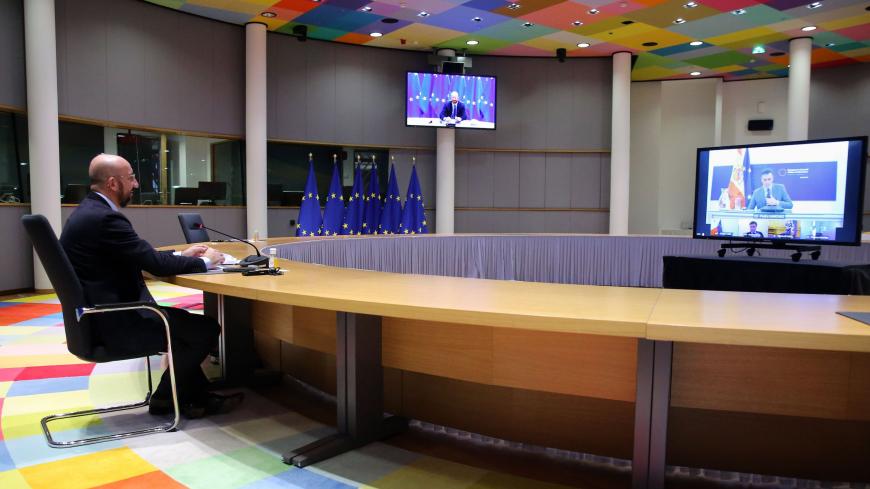 European Council President Charles Michel speaks with Spanish Prime Minister Pedro Sanchez (on screen) as he attends a video conference with representatives of EU member states ahead of the upcoming EU summit, in Brussels, on Dec. 3, 2020. - FRANCOIS WALSCHAERTS/AFP via Getty Images

ISTANBUL — As EU leaders prepare to weigh possible sanctions on Turkey in a European Council summit this week, Turkish President Recep Tayyip Erdogan Monday urged EU officials not be swayed by some member states’ efforts to punish Ankara over ongoing energy and territorial disputes in the eastern Mediterranean Sea.

Reiterating calls for dialogue, Erdogan warned EU leaders to avoid the “strategic blindness” of the Greek and Greek Cypriot lobbies, which are calling for an arms embargo and financial sanctions on Turkey, among other punitive measures, for its energy prospecting activities in contested waters bordering the three nations.

"Turkey will not accept plans and maps that aim to confine country to its coasts off Antalya," Erdogan said in a pre-recorded video message Monday, adding, “We have expressed to our interlocutors that we will not bow to threats and blackmail and that we will not allow imperialist expansionism.”

The statements come ahead of a Dec. 10-11 summit that will follow up on a framework set forth during an Oct. 1 council meeting calling on Turkey to cease surveying activities in the eastern Mediterranean and reduce regional tensions or face possible sanctions.

Following the October summit, Ankara continued energy missions in the region, claiming it was defending the sovereignty and energy rights of both Turkish and Turkish Cypriot citizens, before bringing its Oruc Reis research vessel back to port early last week and pursuing renewed calls for dialogue.

“Turkey has failed to grasp the positive message sent by the EU at the October European Council,” Dendias said Monday, referring to EU officials’ offer to pursue EU-Turkey customs union talks if Ankara ends its energy surveys in the eastern Mediterranean.

Yet in the interim, many additional points of discord have come about between Ankara and EU member states. Erdogan and his French counterpart Emmanuel Macron traded barbs over the rights of Muslim citizens in Europe last month, and the Turkish leader also supported a two-state solution for Cyprus during a visit to the island, further complicating stalled peace efforts there and riling some EU officials.

"All these events have had a jarring effect — especially since the Oct. 1 European Council conclusions — and patience within the EU is reaching its limits,” Sinem Adar, an associate at the Center for Applied Turkey Studies in the German Institute for International and Security Affairs, told Al-Monitor. “There is a very strong Turkey fatigue … even among member states that have historically fostered warmer relations with Turkey."

Adar added, "I call it a dysfunctional marriage. Both parties know it’s not working in its current form, but they also need one another in a range of topics.”

“There have been too many provocations and tensions between Turkey, Cyprus and Greece have prevented any direct talks,” Mass said Monday. “For this reason, we will talk about what consequences we should draw — also with a view to the EU summit this week.”

Past attempts to impose EU sanctions on Ankara have proven difficult, as they require a unanimous vote. In February 2020, the bloc agreed on light sanctions for two Turkish officials in the form of travel bans and asset freezes over eastern Mediterranean energy prospecting activities. Some Turkey observers believe similar measures could be issued this week.

Michael Tanchum, a professor of international relations at the University of Navarra and editor of the recently published report "Eastern Mediterranean in Uncharted Waters," said divisions in the EU over Turkey remain unchanged since tensions peaked in August 2020.

Tanchum said Germany would like to keep Turkey as close to the EU as possible and bloc members such as Italy, Malta, and Spain support this stance, while some European NATO members also seek to avoid alienating Ankara from the alliance. In contrast, officials in France, Greece and the Republic of Cyprus have campaigned more forcefully for sanctions on Turkey.

“The European Council is likely, at minimum, to increase its pressure on Turkey by formalizing its list of sanctions while creating another time window for further diplomacy to reach a solution,” Tanchum told Al-Monitor regarding this week’s summit. “Depending on which voices are most persuasive, the EU may choose to do more.”

Sinan Ulgen, chairman of the Istanbul-based Center for Economic and Foreign Policy Studies, said sentiments toward Ankara have shifted among some bloc members since the October summit, but he expects nations with economic ties to Turkey to stand against sanctions, such as Spain, whose banking sector would be impacted by such measures.

"It is clear that the real pillar of this relationship, which is [EU] accession, has stalled and will not be revitalized in the near future,” Ulgen told Al-Monitor. “So what needs to happen is for the two sides to start talking more maturely about the prospects of deepening cooperation with the customs union, as a rules-based mechanism, being the main pillar of this framework of collaboration between Turkey and the EU.”

Ulgen added, “But if the EU moves ahead with sanctions and Turkey responds to that, it will be even more difficult in the months to come to be able to talk intelligently about this need for a more collaborative, consensual framework between Turkey and the EU.”