At a summit in Brussels Thursday, European leaders appeared ready to impose sanctions on Turkish individuals and companies linked to energy-prospecting activities in the eastern Mediterranean Sea that have raised regional tensions over the last year. 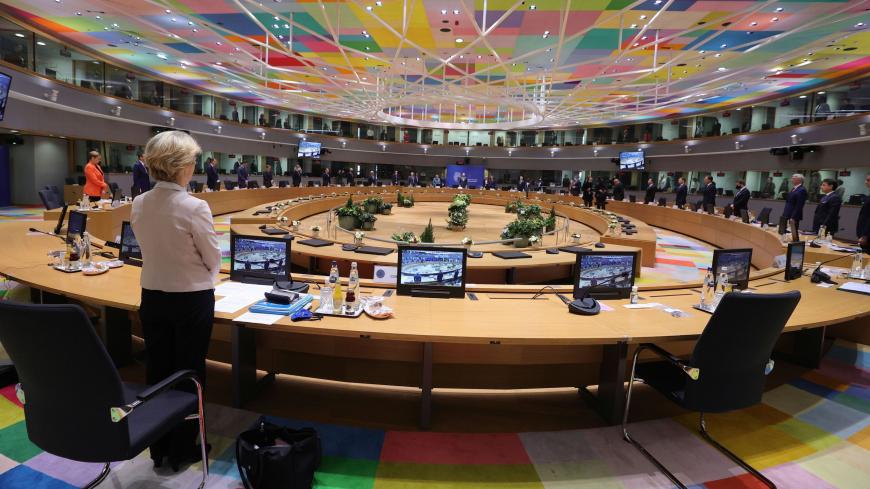 President of the European Commission Ursula von der Leyen (1st-L) and EU leaders observe a minute of silence in tribute to late French President Valery Giscard d'Estaing prior to a round table meeting during an EU summit at the European Council building in Brussels, on Dec. 10, 2020. - OLIVIER MATTHYS/AFP via Getty Images

ISTANBUL — European leaders were expected to approve sanctions on Turkey during a European Council summit Thursday, in which bloc members appeared ready to agree on punitive measures regarding Ankara’s energy-prospecting activities in contested parts of the eastern Mediterranean Sea.

According to a draft statement seen by Reuters, the sanctions will likely be imposed on individuals and companies linked to gas drilling activities near Greece and Cyprus that have raised regional tensions over the last year.

The sanctions would expand on a 2019 framework through which the European Union can impose sanctions on people, companies or organizations linked to energy-prospecting activities in contested areas. In February 2020, EU officials approved travel bans and asset freezes for two Turkish officials — the vice president and a deputy director of the Turkish Petroleum Corporation.

Assessing the EU’s approach to de-escalating eastern Mediterranean tensions with Turkey, Ozgur Unluhisarcikli, Ankara director for the German Marshall Fund, noted bloc members have diverging interests and motivations toward Ankara. The disunity, he said, has resulted in sanctions discussions that lack a clear objective as well as appropriate measures to achieve a desired outcome.

He added, “On the contrary, if the EU wants to go ahead with mild to moderate sanctions … there will not be any outcome except hurting the Turkish economy, providing President [Recep Tayyip] Erdogan with new talking points.”

Speaking Wednesday, Erdogan dismissed the threat of EU sanctions, accusing Greece of abruptly withdrawing from negotiations to de-escalate regional tensions when it signed a maritime agreement with Egypt on Oct. 10, and has since lobbied EU member states to impose punitive measures on Ankara.

“The EU has never acted honestly. It has never kept its promises,” Erdogan said Wednesday, adding, “Any sanctions decisions that can be taken against Turkey do not concern us much.”

Greek Prime Minister Kyriakos Mitsotakis, meanwhile, urged EU leaders Thursday to follow through in imposing tougher sanctions on Turkey as outlined in European Council conclusions following an Oct. 1 summit, saying the “credibility” of the EU was at stake if it did not respond to Turkey’s continued “delinquent behavior” in the eastern Mediterranean.

“Now it will be seen whether, as Europe, we are really credible in what we ourselves have agreed to,” Mitsotakis told reporters Thursday.

“We have not seen a fundamental change of direction in Turkey’s behavior,” Borrell said Monday. “On the contrary, in several aspects the situation has worsened.”

In its October summit conclusions, the council proposed resuming discussions on the EU-Turkey Customs Union modernization and visa liberalization on the condition Ankara cease energy-prospecting activities in the eastern Mediterranean or face possible sanctions. Since then, EU-Turkey tensions were further strained as Erdogan engaged in a spat with his French counterpart Emmanuel Macron over the rights of Muslim citizens in France, resulting in the Turkish leader calling for a boycott on French products.

Erdogan also advocated for a two-state solution in Cyprus during a November visit to the island’s northern majority-Turkish breakaway state, drawing ire from some EU leaders who said such discourse would complicate stalled reunification talks.

Ankara also continued gas exploration activities in disputed tracts of the eastern Mediterranean before withdrawing its Oruc Reis research vessel on Nov. 30, after which Turkish officials resumed calls for dialogue with Greece to address longstanding territorial disagreements. Ankara maintains its energy-prospecting activities are conducted to protect the sovereignty and energy rights of both Turkish and Turkish Cypriot citizens.

According to the draft statement on Turkey, EU leaders will seek to avoid tougher sanctions on Ankara until the bloc can coordinate its response with the administration of US President-elect Joe Biden, which is expected to weigh separate sets of sanctions on Turkey over its acquisition of Russian-made S-400 missile defense systems as well as punitive measures on the state-owned HalkBank for violating US sanctions on Iran.

EU leaders are expected to revisit measures regarding Ankara’s policies in the eastern Mediterranean in the spring. Ilke Toygur, a CATS fellow at the German Institute for International and Security Affairs and co-author of the recent report “Turkey, the EU and the Eastern Mediterranean Crisis,” said ongoing EU-Turkey tensions would not be resolved in one summit.

“A more holistic approach is needed which should have both a Turkey-EU relations dimension in addition to broader EU action in its southern neighborhood,” Toygur told Al-Monitor.

She added, “Certain steps could be taken to prevent further deterioration. The EU should signal to Turkey that its claims in the eastern Mediterranean are heard. In addition, there should be a continuous reference to international law, instead of deciding who is right or wrong momentarily.”

Turkey was among a variety of high-stakes issues discussed during the summit’s first day Thursday. Other topics included a stalled 1.8 trillion-euro economic relief package, which was blocked by the Polish and Hungarian governments over disagreements that linked funding access to rule-of-law requirements. New carbon emission reduction goals to combat climate change were also on the agenda.