German forces intercepted a Libya-bound Turkish ship suspected of carrying arms, sparking the latest row between an EU member state and Ankara ahead of a key summit assessing bilateral ties next month. 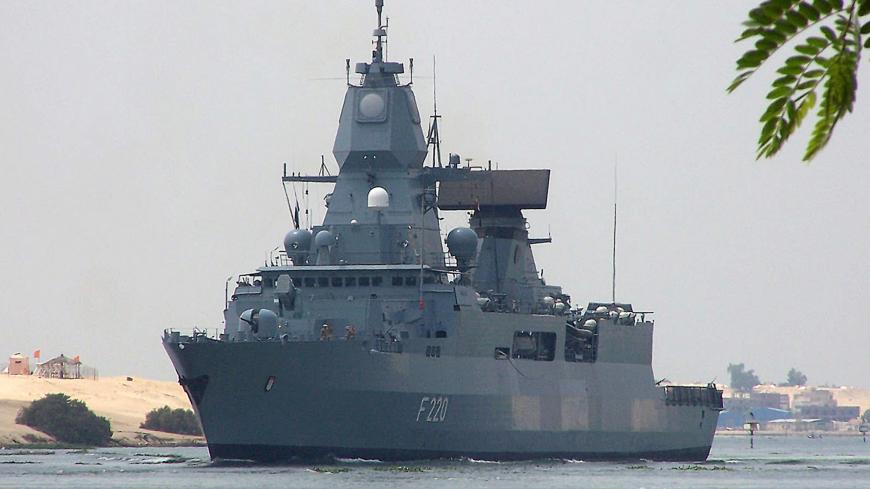 ISTANBUL — A German naval mission intercepted a Turkish ship in the Mediterranean Sea on Sunday on suspicion it was violating an arms embargo on Libya. After a more than 15-hour search, Ankara ordered the operation be halted, preventing German personnel from completing their investigation, according to German officials.

The incident sparked backlash from Turkey’s Foreign Ministry, which in a statement Monday called the search “unlawful,” further straining EU-Turkey relations at a time when bilateral ties are in the spotlight ahead of a key European Council summit on Dec. 10 during which member states are expected to review possible sanctions on Ankara.

German forces with the EU’s Operation Irini, a mission to stop illicit weapons transfers to Libya, boarded at night the Turkish-flagged Rosaline-A freighter in the Mediterranean about 200 kilometers (124 miles) north of the Libyan city of Benghazi.

According to Turkish Foreign Ministry Spokesperson Hami Aksoy, the ship was carrying paint and humanitarian aid to the Libya port of Misrata. Aksoy said the crew was “forcibly searched.”

“The intervention in question was carried out with consent from neither our country as the flag state nor the ship's captain,” Aksoy said in a statement Monday.

Speaking to reporters in Berlin Monday, German Defense Ministry Spokesperson Christian Thiels refuted Aksoy’s claims, saying the ship’s crew was cooperative and did not object to the search. He said Ankara did not respond within four hours of the search notice, which is considered implicit consent by monitors.

“The crew was totally cooperative,” Thiels said. “Turkey subsequently declared it doesn’t consent to the boarding. And then the boarding was immediately halted. That’s the standard procedure.”

No evidence was found of weapons aboard the Rosaline-A at the time of the search, and the ship eventually continued to its destination.

The incident marked the second confrontation this year between Turkey and a NATO-allied naval force monitoring weapons transfers to Libya, where Ankara backs the Tripoli-based Government of National Accord in an ongoing civil war. In June, a French navy ship was reportedly harassed by three Turkish naval frigates when it attempted to inspect a Tanzanian-flagged cargo ship they were escorting in the eastern Mediterranean. NATO has since launched an investigation into the incident.

The latest developments come after Turkish President Recep Tayyip Erdogan made several speeches appealing to EU leaders over the weekend, reiterating his government’s commitment to Turkey’s long-stalled EU accession process and cooperation with bloc members despite a number of foreign policy disagreements.

“We see ourselves in Europe, not anywhere else, and we want to build our future with Europe,” Erdogan said in a videoconference Saturday. “We want to be in stronger cooperation with our friends and allies.”

Ilke Toygur, an analyst of European Affairs in Elcano Royal Institute and CATS Fellow at the German Institute for International and Security Studies, said Erdogan’s statements were likely tied to an upcoming European Council summit on Dec. 10-11.

During the meeting, the council is expected to weigh sanctions on Turkey for its ongoing energy prospecting activities near Cyprus, which it deemed as violating Cypriots sovereign rights during a previous meeting in October. Turkish officials maintain they are defending the sovereign rights of Turkish Cypriot citizens.

“Every once in a while, President Erdogan and his close circle of foreign policy advisers turn back to Europe,” Toygur told Al-Monitor. “These declarations tend to coincide with decisive moments or meetings in the European Union.”

On Saturday, Ankara announced it would extend energy prospecting activities in the eastern Mediterranean until Nov. 29. The move adds to a list of grievances between Turkey and EU states, including Erdogan’s support for a two-state solution in Cyprus and a heated spat between the Turkish leader and French President Emmanuel Macron over the religious rights of Muslim citizens in France.

“We consider the recent actions and statements by Turkey related to Cyprus contrary to the United Nations resolutions and further igniting tensions,” Borrell said at a news conference Thursday.

Amid such tensions, Toygur said the mood in the EU was “not necessarily very positive” toward Ankara, adding that the possibility of sanctions remains difficult to gauge at the moment.

“If there will be concrete actions against Turkey in December, they will very much depend on the results of diplomatic negotiations that are taking place right now, not only in between Turkey and the EU but also between member states,” Toygur told Al-Monitor.