Ahead of a European Council summit this week, a report by EU Foreign Policy Chief Josep Borrell laid out a roadmap to deepen bilateral trade despite recent setbacks in Ankara’s human rights record, while outlining economic sanctions should more turbulence arise. 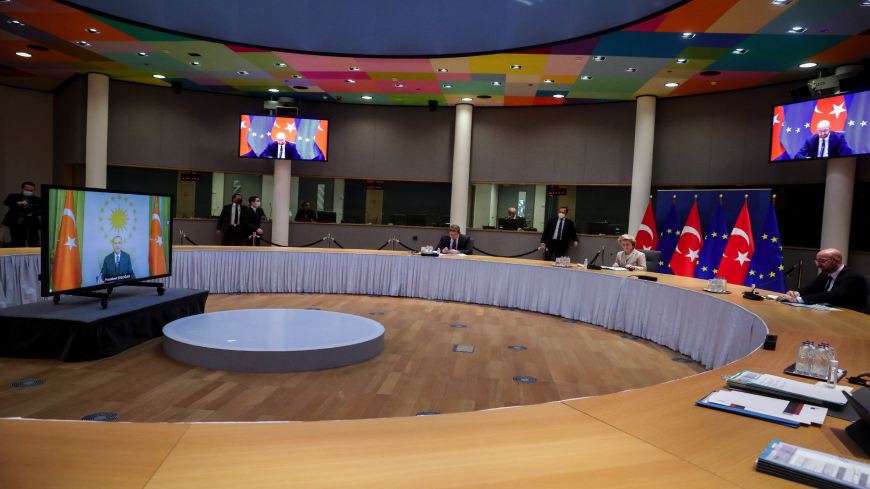 EU Commission President Ursula von der Leyen and the EU Council President Charles Michel hold a video conference call with Turkey's President Recep Tayyip Erdogan in Brussels on March 19, 2021. The call comes as the two neighbors seek to make good on improved ties after a spike in tensions last year over maritime claims in the Eastern Mediterranean. The leaders of the EU's 27 member states are set to discuss the state of relations with Ankara as one of the issues at their summit in Brussels next week. - STEPHANIE LECOCQ/POOL/AFP via Getty Images

ISTANBUL — With the European Council set to review troubled EU-Turkey relations in a summit later this week, the bloc’s Foreign Policy Chief Josep Borrell released a report Monday evening laying out a positive agenda based on deeper trade ties with aims to soothe bilateral grievances.

The March 25-26 summit is expected to primarily focus on tensions in the Eastern Mediterranean, which have largely subsided since Ankara pulled back energy prospecting vessels from disputed areas in the region late last year.

Speaking Monday, Borrell welcomed de-escalation measures taken by Turkish leaders in the region after unveiling a 16-page report in which he outlined areas for further bilateral cooperation, including migration management and a possible resumption of Customs Union modernization talks that would revamp EU-Turkey trade.

In the report, Borrell also proposed a set of economic sanctions to be applied if Ankara moves once more against EU interests. Though he expressed concern over developments in Turkey’s domestic politics Monday, analysts said recent rhetoric from EU officials appears to signal a shift away from cooperation based on improvements in Ankara’s human rights record toward a more pragmatic approach.

“For practical purposes, the need to somehow have a positive, constructive and stable relationship with Turkey overtakes the desire to see progress on human rights in Turkey,” Asli Aydintasbas, a senior policy fellow at the European Council on Foreign Relations, told Al-Monitor.

She added, “We are seeing a clear trend in the EU to transition to a relationship that is more overtly transactional and stripped normative values.”

The apparent attempt to refurbish EU-Turkey ties by focusing on trade and migration comes after years of democratic backsliding in Ankara, highlighted most recently by a series of regressive moves last week that drew condemnation from Turkey’s Western allies.

On March 19, Ozturk Turkdogan, co-chair of Turkey’s Human Rights Association, was detained along with several members of the HDP during morning house raids by security personnel. Then early Saturday, Turkish President Recep Tayyip Erdogan issued a decree announcing Turkey’s withdrawal from the Istanbul Convention, a European treaty designed to protect women from violence.

The decision to pull out of the convention, to which Turkey was the first signatory when it was introduced in Istanbul in 2011, was denounced by Council of Europe Commissioner for Human Rights Dunja Mijatovic, as well as US President Joe Biden, who in a statement Sunday said, “Countries should be working to strengthen and renew their commitments to ending violence against women, not rejecting international treaties designed to protect women and hold abusers accountable.”

The Turkish Directorate of Communications defended the move Sunday in its own statement, saying, “The Istanbul Convention, originally intended to promote women’s rights, was hijacked by a group of people attempting to normalize homosexuality — which is incompatible with Turkey’s social and family values.”

“There is de-escalation in the Eastern Mediterranean, [but] the decision on the HDP or the pullout of the Istanbul Convention are certainly the wrong signals,” Mass said.

In light of recent developments, analysts said they did not expect new measures to be taken toward Ankara during this week’s European Council summit, citing recent improvements in Eastern Mediterranean tensions as the meeting’s main focus. Unnamed EU officials told Reuters Thursday sanctions imposed last year on executives with Turkey’s state-owned energy company were repealed after successful de-escalation efforts in the region.

Sinem Adar, an associate at the Center for Applied Turkey Studies in the German Institute for International and Security Affairs, said the EU appears to be moving toward a dual approach with Turkey in which continued de-escalation in the Eastern Mediterranean and over the Cyprus issue will foster a positive agenda in terms of economic and migration cooperation.

“The human rights issue, as far as the Borrell report is concerned, is not a core element of the positive and negative measures that are outlined” for bilateral ties moving forward, Adar told Al-Monitor.

Adar continued, saying the EU may be prioritizing stability over democracy in Turkey, but recent policies implemented under Erdogan’s Justice and Development Party have fostered repeated bouts of turmoil, as most recently seen with the economic jolts sparked by the surprise replacement of the nation’s central bank chief Saturday.

“Everything that has been happening since the March 2019 local elections shows the current regime cannot stabilize itself, thus the frequency and the pace of these radical decisions, like last week,” Adar told Al-Monitor. “An unstable authoritarian structure in Turkey is a security threat to the EU, so I think focusing on rule of law issues is not only a matter of principle, it is a matter of interest for the EU.”

“Because of migration and European trade with Turkey and the Eastern Mediterranean, [EU officials] cannot afford to have the type of combative relationship that Americans can,” Aydintasbas told Al-Monitor.

The contrasting approaches “seem to be an effort to do a good-cop-bad-cop routine where Europeans clearly want to be the good cop. They don’t want human rights to be an issue with Turkey relations, at least for now,” she added.