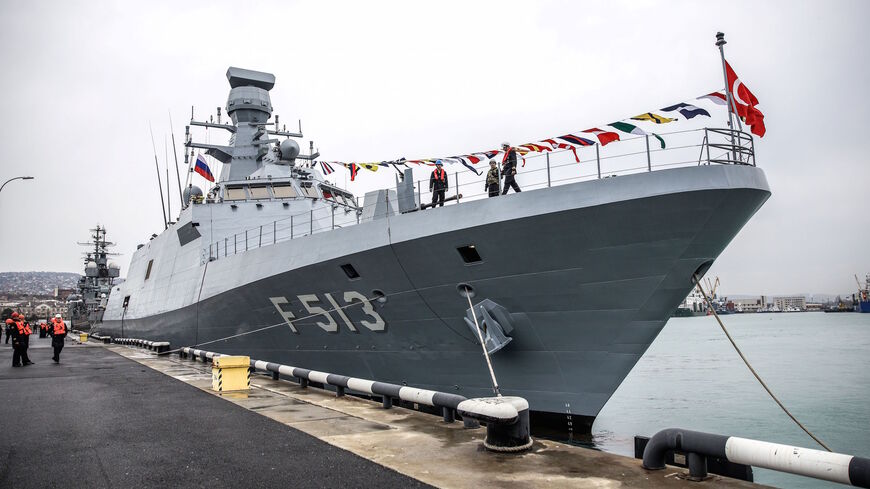 The corvette Burgazada of the Naval Forces of Turkey moors at the harbor of the Russian port of Novorossiysk on March 6, 2019. - AFP via Getty Images

ISTANBUL — The eastern Mediterranean was once more the site of maritime spats this week as overlapping territorial claims between Turkey, Greece and the Republic of Cyprus fostered renewed tensions in the region.

On Monday the Turkish navy turned back a Greek Cypriot-contracted research vessel that Ankara said was infringing on its continental shelf without permission in waters southwest of Cyprus. The Nautical Geo, a Maltese-flagged research vessel, was “taken away” from what Ankara defines as its territorial waters, Turkey’s Defense Ministry said without providing further details on how the vessel was removed.

The Nautical Geo was anchored Tuesday in the Cypriot port of Lanarca, according to the tracking site marinetraffic.com. The confrontation was the vessel’s second with the Turkish navy, which also stopped the Nautical Geo near the Greek island of Crete last week.

“It is unacceptable that Turkey, through continuous provocations and inflammatory statements, tries to undermine the climate of these contacts before they even take place,” Dendias said Monday.

Greece and the Republic of Cyprus do not recognize parts of Turkey’s maritime claims in the eastern Mediterranean and Aegean seas, and vice versa. Longstanding disputes over territorial and energy rights in the region have escalated in recent years, particularly after Ankara signed a 2019 memorandum with Tripoli’s Government of National Accord delineating a shared water boundary across Greek territory that later sparked fears of confrontations between the Greek and Turkish navies in the summer of 2020.

In response, the European Council introduced a road map in March to curb regional spats, laying out a focus on a “positive agenda” that would see Turkey benefit from revamped trade and migration management agreements with the EU in exchange for reduced territorial feuds in the eastern Mediterranean. Wednesday's bilateral talks between Turkey and Greece in Ankara will be the first of their kind in five years and are part of the EU’s de-escalatory measures, though observers say both parties have few incentives to make progress on areas of disagreement.

“There is no political will at the moment for moving forward,” Ilke Toygur, an analyst of European Affairs at the Elcano Royal Institute and a fellow at the German Institute for International and Security Affairs, told Al-Monitor.

Toygur said Greece has benefitted from regional tensions, solidifying its position as a “reliable ally” in the Mediterranean for the United States and more recently for France, with which Athens signed a 3 billion-euro deal last week to purchase French-made frigates and pursue mutual defense cooperation.

She said Turkey, on the other hand, “does not think compromising here and there will be beneficial for the overall picture. So both sides keep on talking and stating their positions, without compromising so much.”

In an interview published in the Turkish magazine Kriter Tuesday, Turkish President Recep Tayyip Erdogan said his government would continue to protect Turkish interests against the “double standard” presented by international laws based on what he called “fabricated maps.”

“Aren’t we going to protect our rights in the eastern Mediterranean? Are we going to accept fabricated maps?” Erdogan asked.

Ozgur Unluhisarcikli, Ankara director for the German Marshall Fund, said in the absence of a solution to ongoing territorial disputes in the eastern Mediterranean, a period of heightened tensions would be inevitable.

“These incidents could escalate,” Unluhisarcikli told Al-Monitor, underlining the potential for future accidents or miscalculations between the Turkish, Greek and Greek Cypriot navies and adding, “Third-party intervention at this stage would be very beneficial.”

Who that third party might be remains an open question as the German government, which played an intermediary role in advancing Turkey-Greece talks last year, is currently in a state of flux and without a confirmed chancellor following elections last month.

“Until the Germans determine who their next chancellor is, there’s very little incentive for Turkey to conclude talks with Greece because the pretense for all these talks is the positive agenda that the EU has been dangling in front of Ankara with a revised Customs Union,” Erol Kaymak, a professor of political science and international relations at Eastern Mediterranean University in Northern Cyprus, told Al-Monitor.

Kaymak continued, “It seems to me that all bets are off, so everyone needs to buy for time, but buying for time could also lead to some mistakes.”

Despite the maritime tensions, there are signs Turkish and Greek officials could make progress on joint migration management agreements, particularly as some Athens lawmakers have called for greater coordination between the EU and Turkey on the matter in recent weeks.

Other areas for possible progress include economic cooperation and an increase in high-level talks as well as other trust-building mechanisms between Ankara and Athens, Toygur said.

Meanwhile, Unluhisarcikli noted Ankara’s strategy in the eastern Mediterranean has largely focused on disruption in an effort to create stalemates in its favor.

“A stalemate means that Turkey’s strategy has worked out,” Unluhisarcikli told Al-Monitor. “Turkey actually managed to turn waters that were seen as Greek into disputed waters, and this is a status quo Greece cannot accept.”