The trilateral meeting between the countries is meant to push for a political solution to Syria's 10-year-long conflict. 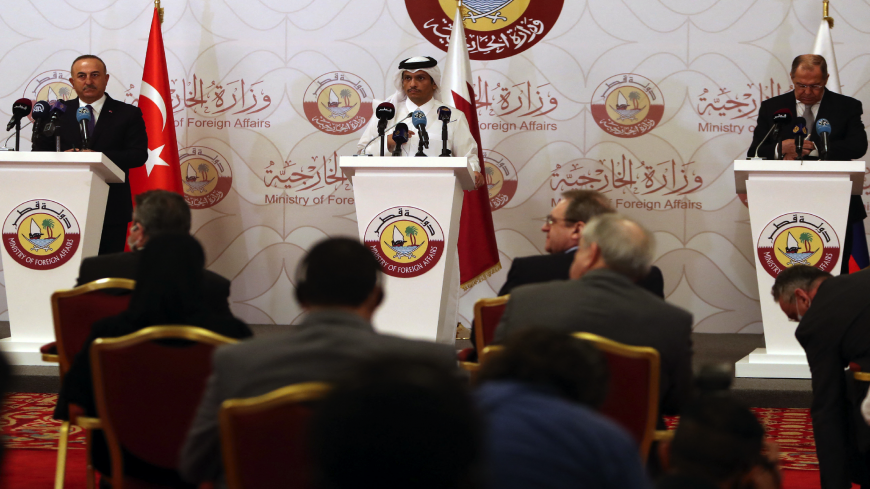 The foreign ministers of Turkey, Russia and Qatar gathered in Doha today, the first trilateral meeting of its kind in which the parties stressed the importance of preserving Syria’s territorial integrity. Their message appeared to be targeting the United States, which is defending the Syrian Kurds’ autonomous government in the energy-rich northeast of the country with hundreds of special forces and has no plans to leave.

“Turkey will continue to defend Syria’s territorial integrity, protect civilians and fight terror groups,” Turkish Foreign Minister Mevlut Cavusoglu said at a joint news conference. He was referring in particular to the Syrian Kurdish People’s Protection Units (YPG), which is the US-led coalition’s top partner in the fight against the Islamic State but are also linked to Kurdish militants waging an armed insurgency against Turkey.

Russian Foreign Minister Sergey Lavrov concurred that separatism posed a threat to Syria’s neighbors. “Our common goals — of Russia, Turkey [and] Qatar — are reflected in the joint statement that we have just approved, which confirms our determination to fight terrorism in all its forms and manifestations, to counter separatist plans that undermine the territorial integrity of the Syrian Arab Republic, which threaten the security of neighboring countries,” he said.

Qatar’s Foreign Minister Sheikh Mohammed bin Abdulrahman Al Thani said a mechanism for delivering humanitarian aid across the whole of Syria needed to be established. “There is a crucial need to lessen the suffering of the Syrians,” he said.

The so-called Doha process, with the next meeting scheduled to be held in Ankara, seems pretty incongruous. Qatar and Turkey back Syrian rebels who unsuccessfully sought to unseat Syrian President Bashar al-Assad. Russia has helped keep Assad in power through its military intervention in Syria in 2015. That is when Ankara made a dramatic U-turn and began working with Russia in exchange for its support in grabbing territory from the YPG Kurds. However, Ankara remains opposed to engaging with Assad, a point Cavusoglu reiterated in Doha. Thani backed the Turkish diplomat, saying the reasons for Syria’s suspension from the Arab League in 2011 remain. Russia is pushing to end Assad’s isolation and has found an ally in Turkey and Qatar’s regional bugbear, the United Arab Emirates (UAE). Lavrov was in Saudi Arabia a day earlier lobbying on behalf of Assad. Russian and Chinese vetoes at the UN Security Council severely hamper the flow of humanitarian supplies to Syria and heightened the misery of Syrians, which Thani said needed to be eased.

So where do the trio’s common interests lie?

Opinions vary. “There are a lot of moving parts involved in this joint statement, all relating to the individual interests and capabilities of each of the signatories,” noted Charles Lister, a senior fellow and director for the Middle East Institute’s Syria program, in emailed comments to Al-Monitor. “For Qatar, this presents another opportunity to act as mediator and facilitator for resolving a major conflict, just like it’s doing on Afghanistan and attempting to do between the US and Iran. It’s also an opportunity for the Qataris to push back against Emirati positioning on Syria by facilitating a negotiated settlement rather than a full embrace of the Assad regime as Abu Dhabi seems to want.”

Lister continued, “For the Turks, engaging in a trilateral process alongside Qatar offers an opportunity to heighten leverage against their peer rival Russia, with whom Ankara maintains a delicate relationship based on balance and deterrence.”

“For Russia, meanwhile, this trilateral group could feasibly offer a more realistic platform with which to bring a potential resolution to Syria to the Americans without the complicating factor of initial Iranian involvement,” Lister added.

Dareen Khalifa, senior Syria analyst for the International Crisis Group, argues, however, that Qatar’s role in the conflict has receded significantly in recent years as it grappled with economic sanctions slapped on by the UAE, Kuwait and Saudi Arabia over its support for the Muslim Brotherhood. These were lifted in January and diplomatic ties between the fellow Gulf Cooperation Council members were restored, but tensions remain. “Qatar’s involvement in Syria has been mostly confined to limited assistance to [the rebel-held province of] Idlib and part of the Syrian opposition,” Khalifa told Al-Monitor.

Galip Dalay, a Richard von Weizsacker fellow at the Robert Bosch Academy and associate fellow at Chatham House, said the Qatar meeting was essentially between Turkey and Russians, who remain the principal foreign military actors in Syria. The Russians provide access to the Turks to pursue their Syrian Kurdish foes. Turkey, through its mentorship of the notionally non-extremist Sunni rebel opposition, allows Russia to position itself as a good-faith actor as it pushes — albeit it fruitlessly — for a deal between the two sides at UN-sponsored talks in Geneva. The Qataris are more window dressing, “financial actors, who add a layer of Arab legitimacy to the mix,” Dalay contended.

Turkey is nervous about getting sidelined as the push to rehabilitate Assad accelerates even though the United States is pressuring the Emiratis to ditch such plans. Turkey has gone from a position of “seeking regime change” to one of “accepting change within the regime,” he said.

Whether Turkey bites the bullet and goes beyond sporadic assignations with Syrian intelligence and begins normalizing relations Damascus will very much depend on how its rocky relations with Washington evolve, Dalay added. These have grown notably frostier under the Joe Biden administration, which is signaling that things could get worse unless Turkey permanently mothballs S-400 missiles it recently bought from Russia. Cavusoglu, however, repeated Ankara’s line in Doha, saying it would do nothing of the sort. He blamed the United States for the impasse, saying it had refused to sell its own Patriot missile system to Turkey.

Should this remain unresolved, the likely outcome is that Turkey will move further into Russia’s orbit, Dalay predicted, and a gradual thaw with Damascus might ensue.