Also: the back story on the spat between Israel and Jordan; Gulf post-COVID economic trends; Turkey’s Kurds; Egypt and Somalia; and more! 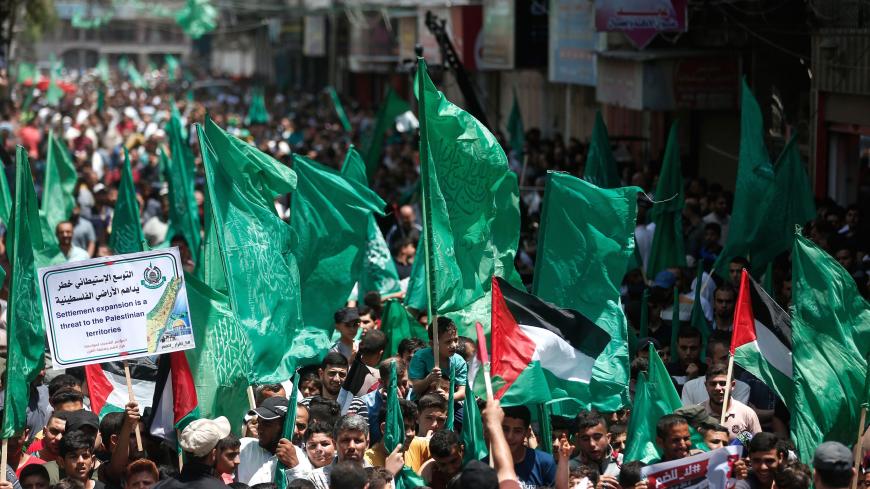 Palestinian supporters of the Hamas movement wave flags as they rally against Israel's plans to annex parts of the occupied West Bank, in Jabalia refugee camp in northern Gaza Strip, on June 19, 2020. - MAHMUD HAMS/AFP via Getty Images

Hot take on Hamas, elections and a possible US reset toward the Palestinians:

The world’s eyes are on the Israeli elections next week, March 23, the country’s fourth national poll in three years, and whether Israeli Prime Minister Benjamin Netanyahu can extend his reign as Israel’s longest-serving prime minister.

But there’s another election next door that will play vitally into both Israeli politics and to the Biden administration’s plan for a reset in US policy toward the Palestinians: elections for the Palestinian legislature on May 22, and then for the presidency on July 31.

The scrum ahead of the March 31 filing deadline, a key benchmark for the elections, is dizzying, and Hamas, which the United States considers a foreign terrorist organization, is well-positioned as a spoiler.

Hamas holds unity card: The divisions and potential alliances within Palestinian politics are, as always, on full display. Yet there also is buzz that the Fatah party of Palestinian President Mahmoud Abbas, which controls the Palestinian Authority and the areas under its administration in the West Bank, and Hamas, the Islamic resistance party that governs Gaza, could form a unified bloc in the elections.

This is not yet a done deal — and may never be — but if so, it would represent the most unified Palestinian front in decades. But here’s the catch: If the two geographies and factions were united, with Hamas integrated into a combined bloc with Fatah, US-brokered peace talks with Israel could get harder.

Not only does the United States consider Hamas a terrorist group, but Hamas’ very reason for being is resistance, not peacemaking. And don’t forget about the small but influential Islamic Jihad, based in Gaza and backed by Iran, which is weighing whether to support the Hamas slate in the elections.

Fatah divisions: There is reportedly discontent with Abbas, but it’s hard to gauge how deep it is. Breakaway former Fatah leaders with high name recognition might peel off votes — Mohammed Dahlan (backed by the UAE); Salam Fayyad (former prime minister) and Nasser al-Kidwa (former Palestinian ambassador to the UN and nephew of late PLO Chairman Yasser Arafat. Marwan Barghouti (who is serving five life sentences in an Israeli prison) backs Fatah in the legislative elections, but he may not support Abbas in the presidential elections.

Our take: The safe money is on Abbas, but it’s too soon to tell, given the politicking ahead of elections. We’ll know more after March 31. Whatever the extent of discontent with his leadership, like Bibi, Abbas benefits from a divided opposition. The wild card is Hamas. If the Palestinian leadership comes out more united under Abbas, with Hamas on board, his internal position would be stronger than ever — but the role of Hamas could be complicating. Although Abbas and Fatah would be in charge, the prospects for peace, especially if Netanyahu wins, could be distant as ever. And if there is no Fatah-Hamas deal, the whole process could collapse in disunity, before, during or after the elections, leaving the Palestinian political picture even messier than when it started.

1. What’s behind the spat between Israel and Jordan?

Osama al-Sharif has the back story on why Amman scuttled Netanyahu’s trip to the United Arab Emirates last week. In short, Jordan’s King Abdullah II was fed up with Netanyahu trying to make an election issue out of custodianship over the Al-Aqsa Mosque.

Plus, Ben Caspit has this scoop from Jerusalem: Netanyahu and Abdullah have only spoken once or twice since they last met in June 2018.

Karen Young explains that the Gulf region’s economic policy response to COVID-19 is an acceleration of trends that were underway before the pandemic hit. COVID-19 is “speeding things along, and we see now a wider aperture across the GCC on tax policy, labor market regulation and immigration policy,” she writes.

3. Turkey’s Kurds not wooed by Erdogan

Amberin Zaman takes us inside a Turkish government-run marriage class in the predominantly Kurdish town of Bismil. The lesson plan? “Islamic piety” for soon-to-be newlyweds.

Officially, the mandatory schooling is meant to “raise healthy generations” of new married couples. But critics say President Recep Tayyip Erdogan’s ruling Justice and Development Party has been rolling out religious initiatives to woo sought-after Kurdish voters. Zaman looks at whether those efforts are paying off.

The planned intra-Afghan summit in Istanbul next month could give President Recep Tayyip Erdogan the chance to rebuild some ties with Washington, writes Fehim Tastekin. Relations between the two NATO allies are strained, to say the least. Nearly two months into President Joe Biden’s tenure, Erdogan has yet to receive a call from his new American counterpart.

5.  Egypt and Somalia get cozy

Relations between Egypt and Somalia are on the mend, as evidenced by the new Somali ambassador to Egypt’s meeting with President Abdel Fattah al-Sisi last week. One theory for Cairo’s recent outreach is Mogadishu's membership in the Arab League and African Union, both of which could sanction Ethiopia for building and filling the colossal Nile River dam Egypt opposes.

One cool thing: West Bank palaces get a facelift

The West Bank town of Arraba is working to renovate a set of palaces belonging to one of Palestine’s most powerful families in the 18th and 19th centuries, Ahmad Melhem reports. Check out the palaces and learn more about the family who built them.

Sherri Kraham Talabany, president and executive director of the Iraqi Kurdistan-based SEED Foundation, talks to Amberin Zaman about her work rehabilitating young Yazidi boys in Iraq who were brainwashed and deployed as child soldiers by the Islamic State.

ICYMI: The demise of Israeli democracy?

Yohanan Plesner, president of the Israel Democracy Institute, tells Ben Caspit that a decade of legislation targeting Israel’s rule of law, separation of powers, and system of checks and balances has undermined democracy in the Jewish state. “We’ve weathered the storm,” Plesner says, but a Benjamin Netanyahu victory in next week’s election could change that.

What we’re reading: Syria’s war through the lens

“The camera was my way of breathing,” writes Aboud Hamam, one of 16 Syrian photographers selected for this harrowing photo essay published by the UN Office for the Coordination of Humanitarian Affairs to mark 10 years since Syria’s uprising.