Thirteen Jews have been forced by the Houthis to leave their homeland, leaving behind the last four elderly Yemenite Jews. 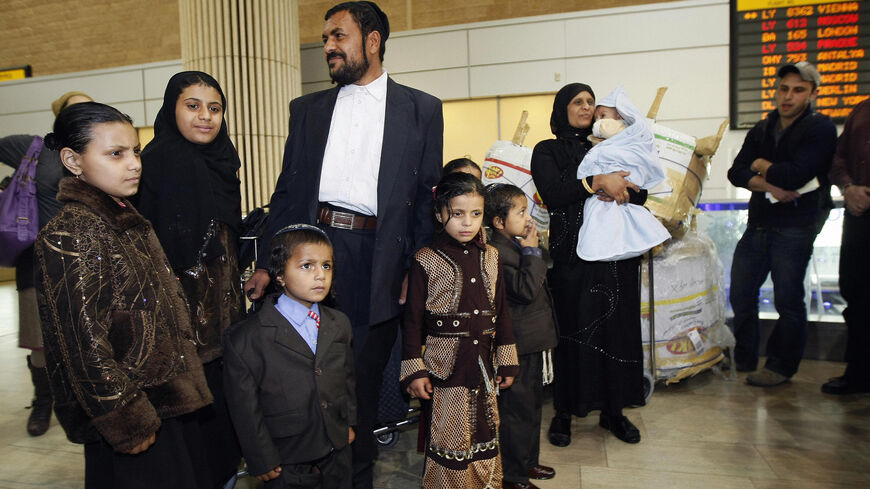 Yemeni Jew Said Ben Yisrael (C) stands with members of his family after arriving to Israel at Tel Aviv's Ben Gurion airport, on Feb. 19, 2009, after leaving Yemen for fear of attack. - JACK GUEZ/AFP via Getty Images

London-based Asharq al-Awsat reported March 28 that the Houthi group in Yemen had deported from their homes in Sanaa 13 Jews who are members of three different families. Thus, only four elderly Jews now remain in the country. The report claims that the 13 exiled Jews did not ask to immigrate to Israel and are currently waiting for the UN refugee agency to transport them to a third country that grants them asylum.

One of the 13 Jews expelled told Asharq al-Awsat, “They (the Houthis) gave us a choice between staying in the midst of harassment and keeping [Levi Salem Musa Marhabi] a prisoner or leaving and having him released.” The newspaper did not give the name of the person interviewed.

Indeed, reports over the past few years indicated that the Houthis have been pressuring the few Jews still remaining in the country to leave. Still, a handful of Jews resisted. In January of this year, reports revealed that some Yemenite Jews were allowed to arrive in the United Arab Emirates, where they united with family members living in London.

It now appears that increasing concerns over the health of Marhabi had pushed the last Jews to agree to a deal with the Houthis. Yemenite Jew Marhabi was captured by Houthi intelligence a few years ago. Apparently, his arrest was related to a complicated operation by the Jewish Agency for the immigration of 17 Yemenites to Israel beginning of 2016. The group brought with it a centuries-old Torah scroll that belonged to the tiny community for generations. Shortly after their arrival to Israel, they were invited to meet with Prime Minister Benjamin Netanyahu at his office, where they presented to him the ancient scroll. The photos of Netanyahu inspecting the scroll apparently angered the Houthis, who said the Yemenite artifact was smuggled out of the country illegally.

Marhabi was accused of assisting this operation and was sentenced for several years in jail. Reports over the years said he had been suffering different kinds of torture and was eventually left partially paralyzed by a stroke.

In November 2020, shortly before the end of his term in office, US Secretary of State Mike Pompeo released a press statement saying, “The United States stands with the Yemeni Jewish community in calling for the immediate and unconditional release of Levi Salem Musa Marhabi.  Mr. Marhabi has been wrongfully detained by the Houthi militia for four years, despite a court ordering his release in September 2019. … Mr. Marhabi is one member of an ever-shrinking community of Yemeni Jews, who have been an important part of Yemen’s diverse social fabric for thousands of years. We call on the Houthis to respect religious freedom, stop oppressing Yemen’s Jewish population, and immediately release Levi Salem Musa Marhabi.’’

The Biden administration had not repeated that call. Israel, for its part, has been careful not to make any public statements on the issue so as not to provoke the Houthis and aggravate Marhabi's situation.