Yemen’s Jews and the road to Israel

Yemeni Jews who immigrate to Israel are taking with them a large part of what was left of Yemen's religious diversity. 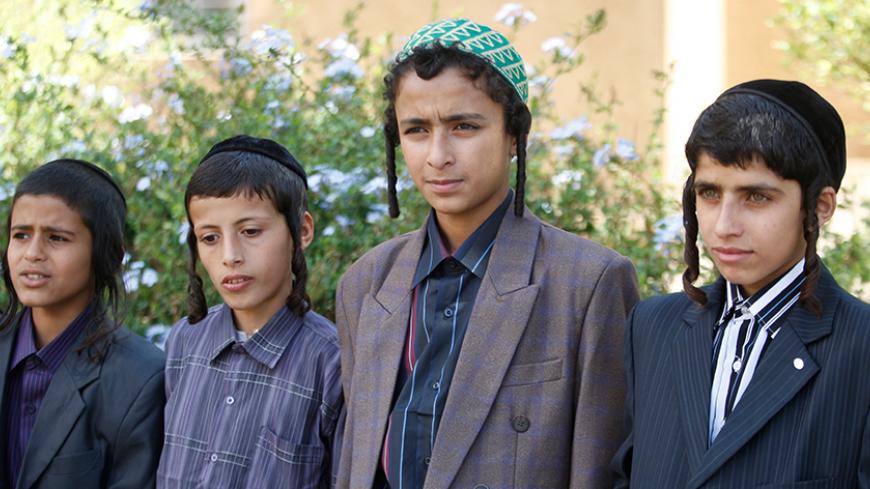 Yemeni Jewish boys are seen at their housing compound during the Jewish Passover holiday in Sanaa, Yemen, April 9, 2009. - REUTERS/Khaled Abdullah

ADEN, Yemen — Israel's success last month in covertly getting 19 Jews out of Yemen has raised some speculation among the press and Yemeni people about the successive waves of migration of Yemeni Jews from their homes in the southern Arabian peninsula to their alternative homeland of Israel.

The very existence of Yemeni Jews has been associated with the political conflict that has been fluctuating in Yemen for quite some time. However, Jewish migration to Israel, especially that which took place in March, aroused resentment among the Yemeni public and politicians alike.

Deeming the step as a kind of "declared complicity" with the ​​settlement of Jews in Palestine, many Yemenis opposed the Houthis' accommodation of the Jewish Agency's request to facilitate the departure. Houthis are now in control of the capital, Sanaa.

While the migration of Jews to Israel has been successful over the years, many people associate it with shady dealings. While some of these deals are well known, others remain shrouded in mystery. Yemeni political researcher Nabil al-Bakiri does not rule out the possibility that secret political deals have been made for decades with successive Yemeni governments.

Bakiri told Al-Monitor that the Jewish migration to Israel created a kind of rapprochement between Yemen's royalist authorities and the Zionists, especially following the former’s approval of the movement of at least 50,000 Jews to Israel in 1949 and 1950.

Israel kept this in mind and had its aircraft support royalist forces in their war with the Egyptian-backed republican forces during President Gamal Abdel Nasser’s rule, Bakiri added.

He pointed out that the region’s dealings with Yemen’s Jews shows the significance of this issue. The Houthis, who have been leading an insurgency against the internationally recognized government of Yemen for more than a year, have recently facilitated the Jews’ emigration to Israel. He indicated that this has occurred in order to build relations with the international community in a bid to rescue [the Houthis] from the military campaign waged by the Saudi-led Arab coalition in support of President Abed Rabbo Mansour Hadi’s authorities.

Bakiri also told Al-Monitor that despite the ongoing confusion in the region regarding the Houthi Shiite minority, US and Israeli support for it seems clear. This explains why the Houthis established communication channels for the "Magic Carpet 2" operation last month.

The first wave of Jewish immigration from Yemen to Israel took place in 1882, when 150 migrants arrived in Jerusalem following a trip described as "onerous," as told by several historical sources. Some 25 years later, between 1907 and 1909, another wave of mass immigration sent Jews from northern Yemen to Israel.

The Magic Carpet operation of 1948 is the most famous collective Jewish migration operation and it continued for two years, during which thousands of Jews from various Yemeni regions left during the reign of Imam Ahmad bin Humaid Al-Din, who reportedly approved the migration of Jews from his country in return for money. Also, these Jews’ properties were given to the imamate. About 52,000 Jews were sent to Tel Aviv in the operation.

The displacement of Yemeni Jews came back to the forefront in the 1990s, as about 800 Jews were allowed to migrate to Israel between 1992 and 1995 during the rule of Yemeni President Ali Abdullah Saleh.

According to the Jewish Agency, following the outbreak of the war between government forces and Houthi rebels in Saada in northern Yemen, about 200 Yemeni Jews left the country in recent years amid increasing attacks on Jews.

Together with the emergence of the Iran-backed Shiite group in northern Yemen, a hate campaign against the Jewish minority began. Subsequently, in 2007, the Shiite group expelled "the Jews of Al Salem" from Saada province to Sanaa; the group distributed leaflets in the Jews' village, giving them only a few days to leave before they would be killed.

The Jewish community’s concerns grew deeper because of Yemen’s sluggish security system. Fouad al-Alawi, a journalist who specializes in Jewish affairs in Yemen, also said Jews suffered great marginalization at all levels. This marginalization was further exacerbated by the Houthi rebels' incitement against them.

The Yemeni journalist explained that for more than half a century, Yemeni Jews did not receive any official attention, as they remained isolated from the successive governments that ruled the country. All the state did was "provide homes for the Jews who were displaced from Saada, the Houthi stronghold, thus facilitating the arrival of help from some charities in the country."

Alawi pointed out that they suffered from marginalization in education. "Unlike other Yemenis, they were deprived of their right to a government job. In addition, their suffering recently increased given the presence of a group that permits their killing and does not recognize their right to exist in their own country."

As a result, the Jews of Yemen found that their departure from the country would be the only solution for them to live and have access to education and to the citizenship rights that they lost in their homeland.

Alawi told Al-Monitor that he met with some Yemeni Jews who told him they were "not happy in Israel, as they felt alienated."

"It is hard for them to be religious in light of the emancipation taking place in Israel," he said, pointing out that those Jews believe Yemen is the most appropriate country for them to maintain their religiosity and preserve the traditions that they were brought up with. They are conservative and religious by nature, and they want to stay in their original homeland, Yemen, Alawi said.

There are other motives behind the Yemeni Jews' emigration to Israel. Chief among these is religion, given Jews' deep desire to see and die in the Promised Land. Also, some Jews believe the coming of the Messiah is imminent and wish to be in the Promised Land at the time of salvation.

The second motive is economic. These Jews sought to escape the drought that had gripped Yemen. They migrated to look for a decent living standard in Israel, which in turn was seeking to replace Palestinian laborers through the immigration of Yemen’s Jews, most of whom worked in the fields of crafts and agriculture.

With the alarming decrease in the number of Yemeni Jews as they migrate to Israel, Yemen will apparently face the same scenario that most Arab countries ended up facing: It will be completely devoid of this minority, of which only scores are left. This would turn the page on an era of significant religious diversity in Yemen, of which the Jews were an important pillar.