Why some Jews have said Yemeni Jews aren't welcome in Israel

Satmar ultra-Orthodox activists are trying to convince Yemeni Jews to immigrate to the United States instead of Israel. 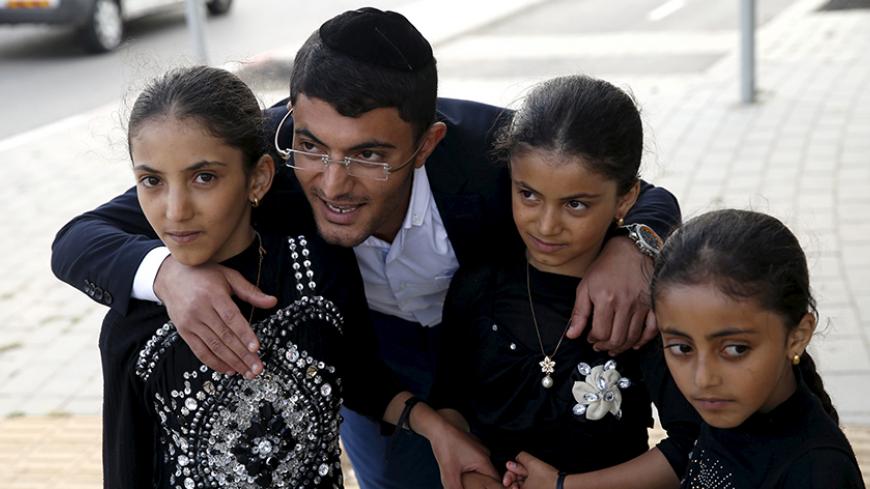 Yemeni Jewish girls who were brought to Israel by the quasi-governmental Jewish Agency for Israel are greeted by their relative, Zion Dahari, at an absorption center in Beersheba, Israel, March 21, 2016. - REUTERS/Baz Ratner

On March 21, 17 new immigrants from Yemen landed in Israel. These are Jews who were born in the war-torn Muslim nation and brought to Israel in a secret operation, aided by many international players. The Jewish Agency, which works to encourage the immigration of Jews throughout the world to Israel, oversaw the operation.

The secrecy of the operation did not only stem from the fear that Islamic elements would try to thwart it, but also from a fear that Jewish elements would actually try to foil the immigration of Yemeni Jews to Israel. These would be the Satmar Hasidim (ultra-Orthodox community), who are considered anti-Zionist and based in New York. According to Jews who have previously emigrated from Yemen, since 1991 Satmar Hasidim have tried to prevent Yemeni Jews from moving to Israel and have encouraged them to move to the United States instead. According to the Yemeni immigrants, the Hasidim told them that in Israel they could not keep their faith and customs, and that their children would leave the faith.

Indeed, in recent years many Yemeni Jewish families have immigrated to the United States and settled in the towns of Monsey and Monroe in New York State, and the Hasidim have helped them financially. The media has reported on some cases where Yemeni Jews were allegedly kept in the United States against their will.

“Their [Hasidim’s] method is based on disparaging the State [of Israel],” said Shlomo Jerafi, a 74-year-old veteran immigrant from Yemen who told Al-Monitor he has been active in recent years in all the operations bringing Yemeni Jews to Israel.

“Already in the early 1990s, when I first returned to Yemen,” he said, “I had to deal with the Satmars’ anti-Zionist propaganda. I had to convince them [the Jews] that in Israel no one cares if you’re religious or secular. But they didn’t believe me, because they were sure that they would force them to remove their [Jewish traditional skullcap] yarmulkes [in Israel], because that’s what the Satmar said.”

According to Jerafi, the reason that Yemeni Jews especially became a target for Satmar Hasidim is the fact that they are the only Jews in the Diaspora who have all remained religious. “You can see in all the waves of immigration, even the last one, that everyone has beards and sidelocks. When I brought Jews from Iraq, for instance, not one of them had a religious appearance. Even the great majority of Iranian Jews don’t look religious. They look exactly like the local Arabs and so they don’t interest the Satmar. The Satmars are truly convinced that only the religious can be saved from secularization.”

The man who is apparently heading the Satmar war against migration to Israel is Rabbi Berl Yaakovovitz, a resident of New York. Yaakovovitz initially refused to be interviewed and claimed that the media is biased against the Satmar. He later agreed and told Al-Monitor that in the last 22 years he has made more than 30 trips to Yemen and knows the local Jewish population well. According to him, no one from the Satmar Hasidim ever said anything against Israel to Yemeni Jews.

“While we believe that Jewish law forbids us to live in Israel,” Yaakovovitz said, “we never try to persuade them of that, because it’s not our business what they do. Our stay in Yemen is voluntary and its aim is to help Jews. If they wish to move to Israel, we have no problem with that. In fact, I knew about the latest operation to bring Jews from Yemen four months ago and kept it a secret. Only if they [the emigrants] wish to move to the United States, we help them. Until today, about 40 families have moved to the United States with our assistance, and they did so for personal reasons. It’s not so unfounded to want to move to the United States, it seems to me it’s the most desirable country in the world for immigration. So what’s the story?”

Jerafi argues, on the other hand, that in recent years the Satmar Hasidim have been rather unsuccessful, and a great majority of emigrants — 95% according to him — have come to Israel. He said that only three families have moved to the United States in recent years. In light of this, the Satmar have changed tactics and started trying to convince Jews to stay in Yemen and not to move to Israel.

“Today there are 40 people in Yemen under the patronage of the [Yemeni] president, and they’re staying at the embassy compound and not leaving because of the Satmar propaganda and their money,” Jerafi said. Yaakovovitz does not deny that Yemeni Jews who stay in the country refuse to leave because they fear their religiousness would be hurt, but he claims that Satmar Hasidim are not responsible.

“They fear that in Israel they won’t be able to keep their religiousness,” he said, “but I would never tell them such a thing or tell them what to do. I only help them; every week I send money there. I maintain a religious school in Yemen for 10 boys and a school for about 15 girls. In addition, we have a study program for married men and give families scholarships. As long as the Jews are there I’ll help them; all their funding is from Satmar. The State of Israel doesn’t assist.”

In a conversation with Al-Monitor, sources at the Jewish Agency confirmed the accusations that were aired here against Satmar, but following the public critique of publicity of the immigration operation — which apparently endangered the Jews who remained in the country — the agency has not issued an official response on the topic.

The fight over the immigration of Yemeni Jews to Israel is the main fight today between Satmar and the Zionist organizations and the state. Unofficial Satmar sources now admit that in retrospect, their attempts to work with Yemeni Jews did not yield the desired results.