Why these ultra-Orthodox Jews support the Palestinian cause

The ultra-Orthodox Neturei Karta faction would rather live under Palestinian rule, while the mainstream ultra-Orthodox community believes that the Zionist state is essential for the Jewish people’s survival. 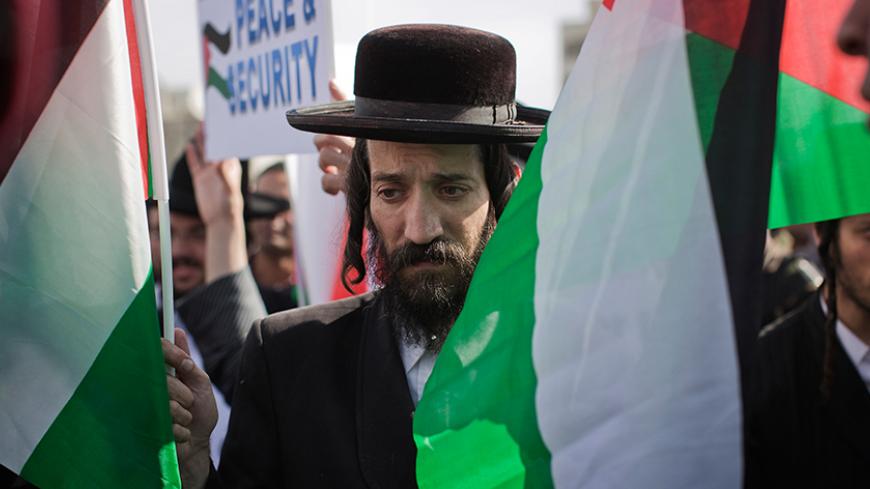 A member of Neturei Karta, a fringe ultra-Orthodox Jewish movement within the anti-Zionist bloc, carries Palestinian flags during a rally marking the 10th anniversary of the death of late Palestinian leader Yasser Arafat, in the West Bank city of Ramallah, Nov. 11, 2014. - REUTERS/Finbarr O'Reilly

The recent wave of terrorist attacks in Israel over the right of Jews to go up to the Temple Mount has sharpened a bitter ideological argument that goes back decades. The debate pits the mainstream ultra-Orthodox society with a small fringe movement within that community, collectively identified as Neturei Karta (“Guardians of the City” in Aramaic). Neturei Karta is an ideological group within the ultra-Orthodox community, numbering just a few hundred families in Israel and elsewhere. It opposes Zionism and the very existence of the State of Israel. Adherents to this ideology believe that the establishment of a Jewish state before the coming of the Messiah was illegitimate and continues to be the cause of wars and terrorist attacks.

As a whole, the ultra-Orthodox community opposes visiting the Temple Mount on religious grounds. It has a complicated attitude toward Zionism, too. Nevertheless, it finds the blatant pro-Palestinian activities of Neturei Karta repugnant.

Neturei Karta’s activities over the past few weeks, which coincide with the escalating security situation in Israel, have infuriated many in the ultra-Orthodox community.

So, for example, while Palestinian President Mahmoud Abbas was lashing out against Israel at the United Nations’ General Assembly on Sept. 30, Neturei Karta extremists voiced their support for him by demonstrating outside the United Nations with Palestinian flags and signs condemning Israel. In July, those same extremists participated in the al-Quds march in Berlin alongside thousands of Muslims chanting, “Israel murders children!” They also showed their support for Iran at a New York demonstration supporting the nuclear accords.

A manifesto released by Neturei Karta in September among the ultra-Orthodox community presented its ideology in a series of questions and answers. The document laid out the core beliefs of its ideology and expressed an understanding of Palestinian terrorism, even while the movement claims to oppose terrorism in principle. Last week, Neturei Karta organized a protest at the home of Rabbi Yosef Elboim, who encourages Jews to ascend to the Temple Mount. At the demonstration, they carried signs in both Hebrew and English saying, “Provoking the Arab nation is forbidden by the Torah.” They hurled insults at members of the Elboim family and threw stones at the car in which the rabbi was riding.

“I can’t understand why the entire ultra-Orthodox community isn’t demonstrating against people going up to the Temple Mount,” Chaim Hirsch told Al-Monitor. Hirsch is the grandson of Moshe Hirsch, a leader of Neturei Karta and one of the extremist group’s most prominent figures. The Brooklyn-born rabbi maintained a close relationship with former PLO leader Yasser Arafat, who actually appointed Hirsch minister of Jewish affairs in the Palestinian government.

His grandson Chaim has adopted the family’s ideology, going so far as to accuse Israel of being responsible for the current wave of terrorism, if only indirectly. “The Torah insists that ascending to the Temple Mount is forbidden, and that anyone who goes up to the Temple Mount is not only a sinner but has blood on his hands.” He continued, “This is all part of the various Zionist movements’ efforts to speed up the redemption. God told the people of Israel, ‘You are in exile,’ but they are rebelling against Him and announcing that the redemption is at hand. This is a very serious sin in the Torah, and it brings severe punishments with it. What has been happening in Israel over the past few weeks is a punishment for trying to speed up the redemption. The Zionists and only the Zionists are responsible for that.”

Regarding Neturei Karta’s steady support for the Palestinians, Hirsch said, “We are doing everything we can to maintain a peaceful relationship with the Palestinian people. We don’t mind living under Palestinian rule.” According to him, Palestinians do not murder Jews out of hatred. “If they are provoked, they respond,” he said to explain the recent wave of stabbings. “My grandmother worked as a babysitter for Arabs in Jerusalem. Why didn’t anyone kill her? It all began when the Zionists organized themselves to immigrate to Israel. That’s when the violence began.”

Hirsch believes that Neturei Karta’s activities are positive, and that they actually help to reduce anti-Semitic ideas among many Muslims. “We meet with Palestinians all the time,” he said. “Some of them were convinced that all the Jews want to kill them and expel them from their lands. Then they met Jews who stayed true to the Torah and did not pollute themselves with invalid nationalism. Anyone can be Neturei Karta. We are an ideological movement. We have no registration or acceptance committee. Anyone who identifies with us is Neturei Karta. We know that we have plenty of support, and it is growing all the time.”

Rabbi Shmuel Pappenheim is the former editor of the ultra-Orthodox Haedah newspaper. He completely rejects Neturei Karta’s claim that they represent the Torah’s position. Nevertheless, he agrees, at least in part, that support for them is indeed growing. “This group represents an utter deviation from the accepted path that we know,” he said insistently in a conversation with Al-Monitor. “They are forging an alliance with those who hate the Jewish people, such as with the Iranians, who deny the Holocaust, and they rejoice whenever an Israeli soldier falls.” Pappenheim is very worried about the spread of the group’s ideology, too. “This was once a minuscule group. Some people even thought that they would eventually disappear. Today, however, you can see them at demonstrations just about every week, especially in Europe and the United States. It’s very surprising, intriguing actually.”

Pappenheim went on to dissect the difference between the anti-Zionism of Neturei Karta and the anti-Zionist approach of most ultra-Orthodox Jews in Israel and around the world. “We are like Neturei Karta,” he explained, “in that we both think that Zionism is a sin. Zionism regards nationalism as the main axis [around which Jewish identity revolves], while we speak of religion as the main axis. Zionism believes in political redemption, while we believe in religious redemption. But it is precisely that point,” continued Pappenheim, “where the debate emerges. Neturei Karta sees everything in black and white. Ultra-Orthodox Judaism takes a more pragmatic approach. The Jewish people went through the Holocaust. No one wanted to accept us. Today the Jewish state is a reality. Despite all the flaws inherent in a Zionist state, it is the best configuration to ensure the survival of the Jewish people. We have to act within that configuration and use our influence within the current reality. We have political power. We pay taxes. We are part and parcel of the system, whether we like it or not.”

As absurd as it seems, while many Israelis perhaps no longer feel the same connection to classical Zionism, it is the very issue that splits the ultra-Orthodox community. In a survey conducted in 2012 by the Israel Democracy Institute, 62% of the ultra-Orthodox stated that they were Zionists. On the other hand, anti-Zionist movements within that sector are not getting any weaker. In fact, in some ways, they are actually growing stronger. The ultra-Orthodox community has become so large and diverse that it mirrors Israeli society at large by encompassing the most expansive political spectrum. Just as there are people who identify with the extreme nationalist right, supporting the settlements and military action against terrorism, there are also those who identify with the anti-Zionist radical left.