Neturei Karta is known for its staunch opposition to Israel, and the group has caught the wrath of right-wing national security minister Itamar Ben-Gvir. 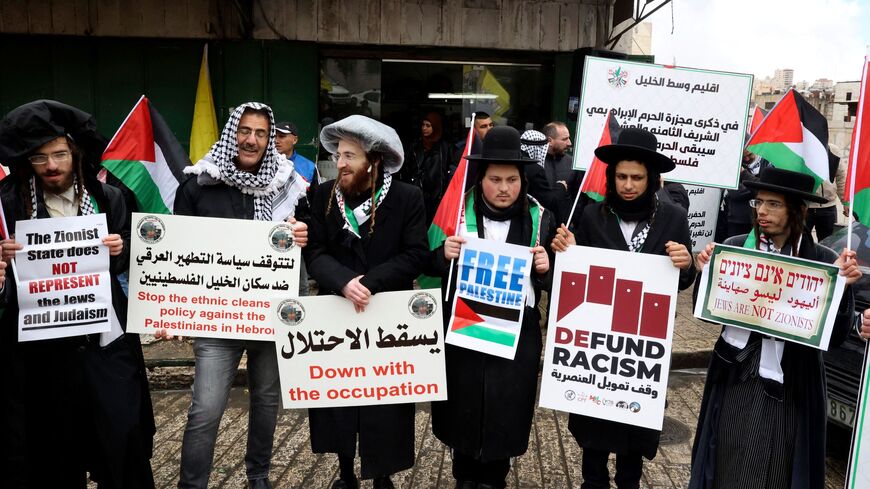 A Palestinian demonstrator stands among members of the Neturei Karta religious group of Haredi Jews in the West Bank town of Hebron, on Feb. 25, 2022. - HAZEM BADER/AFP via Getty Images

NEW YORK — Israeli National Security Minister Itamar Ben-Gvir is locked in an ongoing feud with Neturei Karta over the removal of Palestinian flags and a meeting the anti-Zionist and ultra-Orthodox Jewish group held with the leader of the Palestinian Islamic Jihad.

A spokesman for Neturei Karta said Ben-Gvir has an "extreme settler attitude" in response to his calls to deport some of its members from Israel.

What happened: On Jan. 1, Neturei Karta posted a video showing Israeli soldiers removing a Palestinian flag from the Mea Shearim neighborhood of Jerusalem.

Mea Shearim’s residents are predominantly ultra-Orthodox Jews, aka Haredim, who live in relatively insular communities separate from Israeli society. Most do not serve in the Israeli military, for example.

In response, Ben-Gvir on Monday ordered police to tear down Palestinian flags displayed in public, although flying the flag is legal in Israel. Police have some leeway to maintain public order, but officers were unsure whether they could legally comply with Ben-Gvir’s demands, according to The Times of Israel.

On Monday, some Neturei Karta members went to the West Bank city of Jenin to meet Palestinian Islamic Jihad leader Bassam al-Saadi. The Neturei Karta were pictured with Palestinian flags during the meeting, according to Israeli media.

Islamic Jihad fought a war against Israel in August of last year.

Ben-Gvir tweeted “to Syria!” in Hebrew in response to the photo of Neturei Karta in Jenin, implying that the group should be deported from Israel.

Jenin is part of the Palestinian Authority-controlled Area A in the West Bank.

“We do feel, in addition to the escalation of hostility and extremism towards Palestinians, (the government) has taken hostility towards Haredi Jews in the holy land,” Dovid Feldman, a New York-based spokesman for Neturei Karta, told Al-Monitor.

“Ben-Gvir pretends to be religious and at the same time has an extreme settler attitude,” said Feldman. “This is so much worse than it was before.”

Ben-Gvir is also an Orthodox Jew, but, unlike Neturei Karta, subscribes to religious Zionism. This idea holds that Jews have an obligation to live in and defend the historic Land of Israel. Ben-Gvir lives in the West Bank settlement Kiryat Arba.

Feldman said he was unaware of any investigation of Neturei Karta members. He said the meeting with Islamic Jihad was to show the world that there are Jews opposed to the state of Israel.

“When Jewish people raise the Palestinian flag or meet Palestinians, and it’s in peace and there are no bad words, this makes a statement that we don’t need a state of Israel,” he said.

Why it matters: Israel’s governmental Cabinet took office late last month and notably includes several religious Zionist parties. Ben-Gvir has become somewhat of a poster child of the new government. Ben-Gvir is often associated with Kahanism — the ideology of the late American-Israeli Rabbi Meir Kahane, who called for expelling Arabs from Israel. Ben-Gvir has both praised and sought to distance himself from Kahane.

Ben-Gvir has a history of criticizing Neturei Karta. In 2021, he called for them to be expelled from Israel due to the group burning Israeli flags, the Hebrew-language news site bhol.co.il reported at the time. He also called them "enemies" in a 2019 tweet.