Ben-Gvir’s visit to the Temple Mount/Haram al-Sharif could hurt the new far-right Israeli government's relations with Arab states and Turkey. 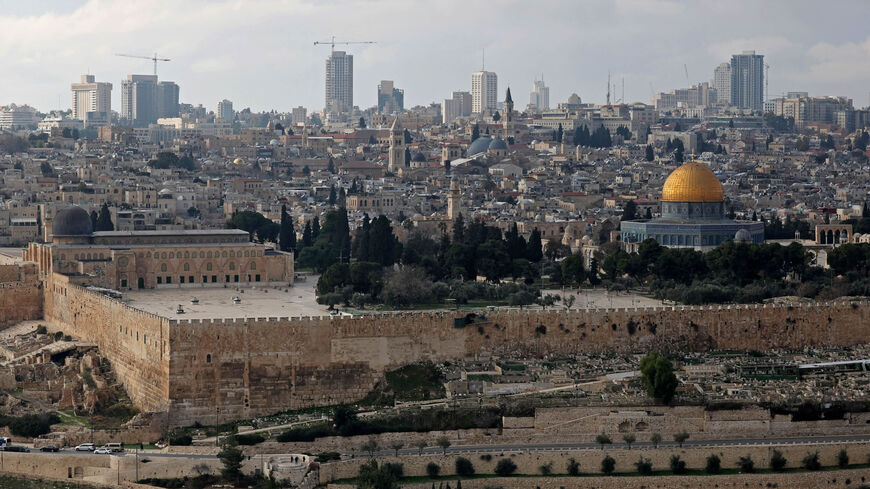 This picture taken from the Mount of Olives shows a view of Al-Aqsa Mosque compound and its Dome of the Rock, Old City, Jerusalem, Jan. 2, 2023. - Ahmad Gharabli/AFP via Getty Images

What happened: Ben-Gvir, a hardline politician, took office along with the rest of Prime Minister Benjamin Netanyahu’s Cabinet last week. Almost immediately, Ben-Gvir began planning a visit to the Temple Mount, aka Haram al-Sharif. The site is holy to both Jews and Muslims and is a frequent flashpoint for Israeli-Palestinian tensions.

After meeting Netanyahu Monday, Ben-Gvir said he would postpone the visit. The Palestinian armed group Hamas threatened escalation should Ben-Gvir head to the holy site. Former Prime Minister Yair Lapid also warned “people will die,” according to The Times of Israel.

JERUSALEM: Far-right politician, and National Security Minister Itamar Ben-Gvir has gone ahead with a visit to Al Aqsa Mosque this morning.

Hamas had warned a visit by Ben-Gvir would “blow up the situation” and former PM Lapid said it would “cost lives” pic.twitter.com/jp1UXjwg4n

However, Ben-Gvir went ahead with the visit Tuesday alongside Israeli security forces. “Israel will not give in to Hamas threats,” he said, as reported by The Jerusalem Post.

The United Arab Emirates (UAE) issued a statement condemning the Israeli minister’s actions, accusing him of “storming” the area.

“The UAE today strongly condemned the storming of Al-Aqsa Mosque courtyard by an Israeli minister under the protection of Israeli forces,” read the statement from the Emirati Ministry of Foreign Affairs.

The Jordanian Foreign Ministry put out a similar statement, saying the Israeli government committed a “flagrant violation of international law.” The statement also referred to the area as a “solely Muslim place of worship.”

The Hashemite Kingdom of Jordan considers itself the custodian of Muslim and Christian holy sites in Jerusalem. Israel does not exactly recognize this role.

“We are concerned by the provocative act by the Israeli Minister of National Security, Itamar Ben-Gvir, on the Al-Aqsa Mosque under the protection of the Israeli police and we condemn it," read the statement.

On Wednesday, Qatar's governmental Cabinet called on Israel to "stop its violations and provocations," according to the official Qatar News Agency.

Why it matters: The incident could threaten relations between Netanyahu’s government and other Middle Eastern states. Israel and the UAE agreed to normalized relations in 2020 as part of the Trump administration-brokered Abraham Accords. Relations have steadily strengthened since then.

Netanyahu was in power as part of a different Cabinet when the normalization occurred. However, his current government includes more far-right, Jewish nationalist politicians.

There are conflicting reports in Israeli media on Netanyahu postponing his trip to the UAE due to Ben-Gvir’s visit. Netanyahu is scheduled to visit Abu Dhabi next week.

Jordan and Israel have had difficult relations since Jordan recognized Israel in 1994. Most of Jordan’s population is of Palestinian descent and many harbor resentment toward Israel. At the same time, cooperation between the two neighbors is increasing. Last year, Israel agreed to send water to Jordan. Israel also exports natural gas to Jordan.

Israel's long-strained relations with Turkey have also improved recently. Last month, Israel's new ambassador to Turkey presented her credentials to President Recep Tayyip Erdogan. Israel had been without an ambassador in Ankara for four years.

Know more: Ben-Gvir is a controversial figure in Israeli politics. He has been charged numerous times with incitement toward hatred against Arabs.

Ben-Gvir is often associated with Kahanism, named after the late American-Israeli Rabbi Meir Kahane. Kahane called for expelling Arabs from Israel, and some of his associates committed atrocities — most notably the 1994 Hebron massacre. Ben-Gvir has both praised Kahane and tried to distance himself from the radical rabbi.

Ben-Gvir’s family originates from Iraq. The country had a large Jewish community for thousands of years until pressure and attacks after the establishment of Israel led nearly all Iraqi Jews to flee to Israel in the 20th century.

Editor's note: this article was updated to include a statement from the government of Qatar.