Israel is concerned over growing Iranian entrenchment in Yemen, not unlike the way Iran operates in Syria. 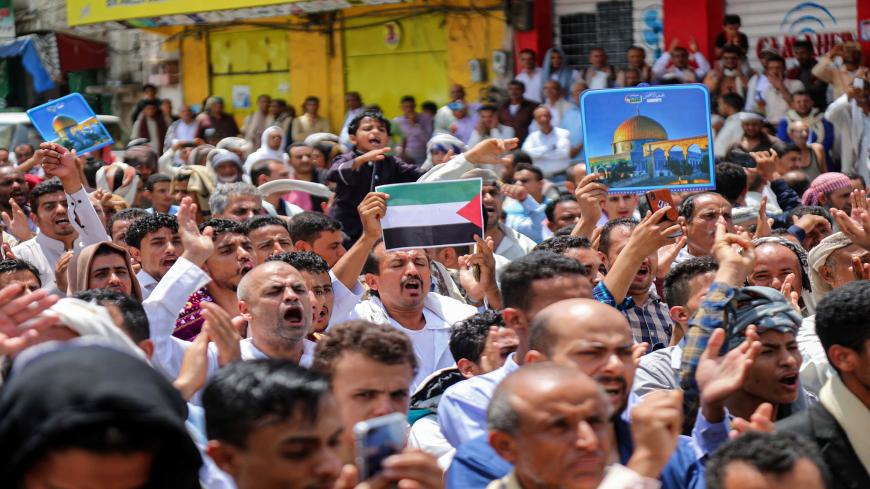 Demonstrators chant slogans with signs depicting Jerusalem's Dome of the Rock and flags of Palestine during a protest in Taez, Yemen, against the US-brokered deal between the United Arab Emirates and Israel to normalize relations, Aug. 21, 2020. - Ahmad al-Basha/AFP via Getty Images

The US Department of State issued a statement Nov. 10, calling for the immediate and unconditioned release of Levi Salem Musa Marhabi, imprisoned for the last four years by the Houthi militia in Yemen. "Marhabi is one member of an ever-shrinking community of Yemeni Jews, who have been an important part of Yemen’s diverse social fabric for thousands of years. We call on the Houthis to respect religious freedom, stop oppressing Yemen’s Jewish population, and immediately release Levi Salem Musa Marhabi," the statement read.

Nine days later, Secretary of State Mike Pompeo arrived in Israel for a three-day farewell tour. Was the issue of Marhabi evoked in his meetings with Israeli authorities? Reports did not mention that. Still, American authorities have been preoccupied with the case of Marhabi for a while now. Last August, US Special Envoy to Monitor and Combat Anti-Semitism Elan Carr implored the Houthis to free Marhabi, warning that "the Iran-backed Houthi rebels in Yemen have a record of persecuting religious minorities."

Publications have linked Marhabi’s arrest to the 2016 clandestine immigration to Israel of a Jewish Yemenite family. The family brought with it an ancient, deerskin Torah scroll, claimed to be 800 years old. Shortly after their arrival to Israel, they were received by Prime Minister Benjamin Netanyahu, presenting to him the rare Jewish artifact. Marhabi was reportedly detained in his country either for helping the family to immigrate or over transporting the artifact considered by Yemeni authorities to be a national treasure.

Israeli authorities have been careful over the past five to six years to refrain from addressing the civil war in Yemen, which is considered an enemy state. Still, lack of public statements does not mean that Israel is not concerned over the Houthi-Iranian axis, which could bring Tehran closer to Israel geographically, including an opening to the Red Sea.

In a rare public statement, during a meeting last year with US Secretary of Treasury Steve Mnuchin, Netanyahu accused Iran of seeking means to launch missiles at Israel from Yemen. "Iran wants to develop precision-guided missiles that can hit any target in Israel within five to ten meters. Iran wants to use Iran, Iraq, Syria, Lebanon and Yemen as bases to attack Israel with statistical missiles and precision-guided missiles," warned the prime minister.

Israeli experts claim that Iranian involvement in the Yemen war is part of a comprehensive strategy by Tehran to increase its regional influence and military presence. They point to certain similarities in the way Tehran operates in Lebanon and Syria with its proxy Hezbollah, and the way it supports the Houthis. In August, after an aerial strike against Iranian targets in Syria, retired Gen. Amos Yadlin tweeted, "A wide, multi-dimensional (geographic, operational, intelligence, technological) campaign is waged in the Middle East, far beyond last night’s strike in Syria. This is an Israeli-Iranian conflict in Syria, Iraq, and Lebanon (and Yemen and KSA?) with both significant Russian and American forces’ presence …"

In fact, Iranian regional ambitions and common Israeli-Saudi interests were evoked already in 2017 by then-Israel Defense Forces (IDF) Chief of Staff Gadi Eizenkot. In a rare interview to Saudi newspaper Elaf, Eizenkot said there is a "complete consensus" between Jerusalem and Riyadh on the issue of the Iranian threat, and that Israel might be ready to share intelligence on that with Saudi Arabia.

Another indirect hint to the way Israel views Yemen was provided in an address by IDF Chief of Staff Aviv Kochavi in June. Kochavi was referring to a prevailing Israeli doctrine, which classifies countries and terror groups in the region into three circles of threats. Kochavi said that Iran has become the most dangerous country in the Middle East, adding that Iran is indeed “located in the third circle, but is highly effective in influencing the first and second circle." According to this doctrine, Yemen is located in the third, more remote circle of threat. Unlike Iran, though, it poses no immediate threat to Israel. Or more precisely, its danger lies in the level of Iranian entrenchment and involvement in Yemen.

On the Yemeni side, Houthi leaders have made over the years several statements accusing the United States and Saudi Arabia of partnering with "the Zionist enemy" against them. In August, the SouthFront security-specialized website reported that Israel and the United Arab Emirates (UAE) are supposedly going to create a military intelligence-gathering infrastructure on Yemen’s Socotra Island.

Israeli experts explained that this report is unfounded, claiming that the report was fabricated by anti-Israeli media. Still, its mere publication could reflect a certain perception within Houthi leadership. More so, it might reflect growing apprehensions in Yemen vis-a-vis rapprochement between Israel and the Gulf states. Israel is thus perceived — right or wrong — as part of an anti-Iran-Houthi alliance, which includes the United States, Saudi Arabia and the UAE.

The same perception could be detected also in a tweet posted last August by the deputy leader of the separatist Southern Transitional Council (STC) in Yemen, Hani bin Breik. Contrary to the Houthis, the STC is supported by the UAE. Breik said, "If visits are open to the southerners [in Yemen] to Tel Aviv, I would be the first to visit them [Yemen Jews who immigrated to Israel] in their homes."

The reported visit of Netanyahu Nov. 22 to Saudi Arabia might very well enhance the Houthis' apprehensions. Normalization between Israel and Saudi Arabia does not seem to be in the immediate offing, but rapprochement absolutely yes. Israel is adamant not to be dragged into the Yemen war. A similar approach on Syria seems to be working, at least partially.