Chances for Israeli alliance with Saudis against Iran fading

Saudi Arabia is reluctant to showcase any cooperation with Israel, including security cooperation against the Iranian regional threat. 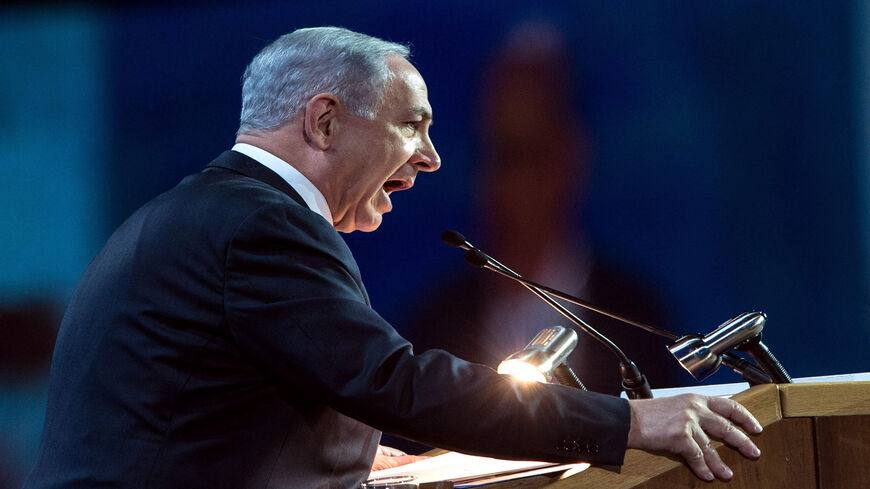 Israeli Prime Minister Benjamin Netanyahu is slated to participate at a leaders’ climate summit organized by the Biden administration on April 22. With the summit online, Netanyahu will not get the chance to meet in person with Saudi King Salman bin Abdul-Aziz Al Saud, also among the 40 leaders invited to the summit. For Netanyahu — if still at the helm of Israel — this would be a second wasted opportunity in just a few weeks. Israel’s prime minister had hoped to meet with Saudi Crown Prince Mohammed bin Salman during his planned visit recently to the United Arab Emirates (UAE), but the Saudis declined the meeting even before the visit itself got canceled.

Interviewed on Ynet March 15, Netanyahu had said Israel was on its the way to making peace with four more countries in the region, stating, “I brought four peace agreements [in reference to agreements with the UAE, Bahrain, Sudan and Morocco], and there are another four on the way. I talked about one of them [one of the leaders in the region] yesterday.” Netanyahu did not specify the four, but analysts said that he was referring to Saudi Arabia, Oman, Qatar, and either Mauritania or Niger.

Then, on March 21, two days only before general elections in Israel, Netanyahu referred publicly to ties with Saudi Arabia. Interviewed by the army radio station, Netanyahu said, “We will have direct flights for Muslim Israeli pilgrims from Tel Aviv to Mecca.”

The promise of the prime minister was probably directed first and foremost at the Israeli-Arab electorate, in a last-ditch effort to win their support at the voting stations. Still, Riyadh’s reaction was swift and painful. On March 22, former senior adviser to the Saudi government Nawaf Obaid published an editorial in the Palestinian Al Quds newspaper, saying his country would not normalize ties with Israel until a peace agreement establishes an independent Palestinian state.

In fact, Obaid was repeating what Saudi minister of state for foreign affairs Adel Al-Jubeir had said March 19, that despite normalization of relations between some Arab countries and Israel, the position of the Kingdom remained unchanged, stating that “our position remains that normalization can only come if there’s an agreement on peace [with the Palestinians].”

Jerusalem is disappointed over Riyadh’s reluctance for rapprochement, and it is not only about Netanyahu presenting to Israelis diplomatic achievements. In a Feb. 22 column in Politico, Aaron David Miller and Richard Sokolsky wrote, "Elections have consequences. And nowhere are the consequences of Joe Biden’s election more worrisome than in Jerusalem and Riyadh. In the past week, the president has signaled to Israeli Prime Minister Benjamin Netanyahu and Saudi Crown Prince Mohammed bin Salman — the region’s two biggest egos — that the sugar high of the Trump years is over."

Thus, Jerusalem has several reasons to be concerned. First, with President Joe Biden, Israel is losing, at least partially, its privileged statues vis-a-vis the United States. Second, the country that is supposed to be Israel’s main ally in an anti-Iranian axis — Saudi Arabia — is also being distanced by the Biden administration. Third, the Biden administration keeps multiplying appeasing messages to Tehran. For instance, on March 26, an unnamed American official told Reuters that as far as the United States was concerned, who might take the first step to resume compliance with the 2015 Iran nuclear deal was not an issue.

All this boils down to one thing — Israel desperately needs a Biden-bypassing alliance against Iran, with Saudi Arabia as the key to such an alliance.

On Feb. 25, i24 News reported that Israel has been holding informal talks with Saudi Arabia, Bahrain and the UAE, to establish a four-nation defense alliance. The report further claimed that the four countries were concerned over the growing Iranian threat in the region, on the nuclear level and also over Iranian expanding influence in Syria and Iraq.

Other reports along that line appeared at the beginning of March. In an op-ed for Arab News, World Jewish Congress President Ronald Lauder called for a Middle East NATO. An unnamed Israeli official said after the article that Israel, Saudi Arabia, the UAE and Bahrain had indeed been discussing informally expanding cooperation in facing common enemies. The prime minister’s office said in reaction it was “not confirming the report, but we are always interested in upgrading ties with our Middle East partners.”

Clearly, all four countries believe a nuclear Iran would be a major regional and global threat, and they are all concerned over the Biden administration’s plan to rejoin the 2015 Joint Comprehensive Plan of Action. Still, without the backing of the Trump administration, and faced with an Israeli leader in a constant quest after photo ops, enthusiasm in Gulf countries for cooperating with Jerusalem might be fading. In fact, the emerging Israel-Saudi-Emirati-Bahrain alliance against the Iranian threat now seems less and less plausible. Whoever gets to be Israel’s next prime minister would have to address this issue rapidly. The White House will not be waiting for Israel to form a new government, to take its own decisions on Iran.