For many former senior security officials, Prime Minister Benjamin Netanyahu should work with the Biden administration, not against it, for a rapid nuclear deal with Iran. 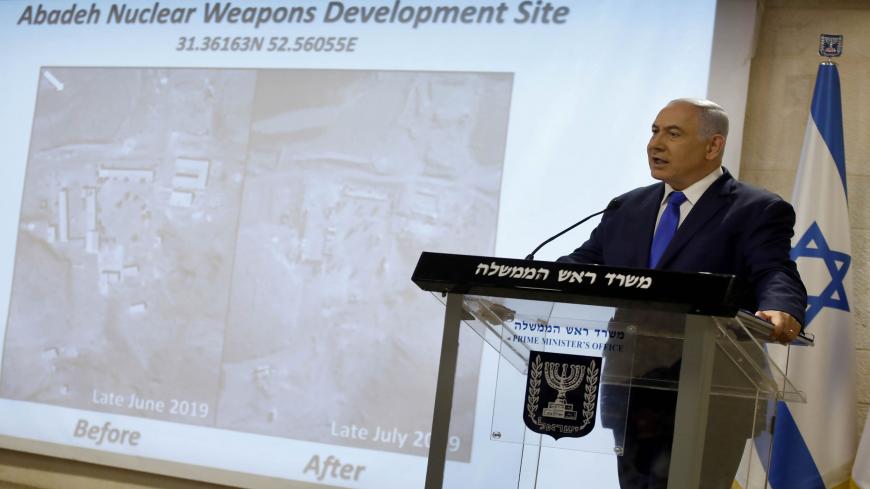 Israeli Prime Minister Benjamin Netanyahu said today that Israel will not rely on efforts to return to a nuclear deal with Iran, stating “Israel isn’t pinning its hopes on an agreement with an extremist regime like [Iran]. We already saw what these agreements are worth … with North Korea.”

Still, as Netanyahu was busy formulating the Israeli strategy on the expected resumption of Iran-US negotiations, hundreds of the country’s former generals, spies and defense experts were urging him to back the approach adopted by US President Joe Biden.

The group, known as Commanders for Israel’s Security, called on Netanyahu to support Biden’s approach for returning to the nuclear deal with Iran — but on condition that Iran resumes all its commitments under its 2015 agreement with world powers.

The letter’s loaded message was undoubtedly troubling for Netanyahu, based as it was on the conclusions of a team of experts with impeccable credentials led by former Mossad Director Tamir Pardo. Among its other members were Eli Levite, the former deputy director general of the Israeli Atomic Energy Commission; Maj. Gen. (Res.) Nitzan Alon, who served as the government’s point person on the Iran nuclear threat; and professor Uzi Arad, former Mossad official and Netanyahu national security adviser. The group’s letter dumped a bucket of ice water on Netanyahu's recent attempts to ignite a fire along the Washington-Jerusalem-Tehran axis.

Netanyahu has made clear his adamant opposition to any return to the 2015 agreement. He demands a new deal that would plug the loopholes in the original deal, including the Sunset clause — the countdown for the expiration of the agreement — by extending its expiration date, curbing Iran’s ballistic missile program and state sponsorship of terrorism, and tightening international nuclear inspections.

Netanyahu knows the Americans are certain to reject his uncompromising conditions. His government partners — Defense Minister Benny Gantz and Foreign Minister Gabi Ashkenazi — believe Israel must engage in an immediate, positive dialogue with the Americans in order to find common ground with the new Democratic administration rather than challenging it with confrontational declarations. Netanyahu does not seem to be on the same page.

While Gantz is in touch with his Pentagon counterpart Defense Secretary Lloyd Austin, and Ashkenazi with his counterpart Secretary of State Antony Blinken, Netanyahu is in touch mostly with himself and a few close aides. The tense four-week wait for Biden’s first phone call did not ease his state of mind and now, to top it all off, he must deal with the generals’ letter.

The letter by Commanders for Israel’s Security, a group with distinct center-left leanings, was signed by a past member of the Netanyahu government, its one-time envoy to China and former Deputy Chief of Staff of the Israel Defense Forces, Maj. Gen. (Res.) Matan Vilnai. “I think the government understands our letter and I think no one doubts that President Biden is committed to the prevention of Iran’s nuclear capacity and does not intend to deviate from this principle, which he has espoused for many years,” Vilnai told Al-Monitor. “I’d like to remind you that when the agreement between world powers and Iran was signed in 2015, worldwide intelligence assessments put Iran only three months away from a nuclear bomb. That was the basic figure.”

He explained the point that the letter sought to make. “The 2015 agreement — which had many flaws — pushed and rolled Iran back to a position of being within one year away from a bomb. When the United States pulled out [in 2018], the Iranians started violating the agreement and were again just three months away. That is why we support a return to the original agreement, implementation of all the lessons learned since it was signed and a focus only on the nuclear issue,” he said.

Vilnai added, “We must not play across the entire field. We must do everything possible to prevent a nuclear-capable Iran, period. That should be the focus. We must make sure the Iranians are not violating the agreement and improve what needs improvement. Only an improved agreement of this kind can accomplish the task of depriving Iran of nuclear capacity."

In other words, a team of particularly senior experts has concluded that contrary to the position of most top members of the Netanyahu-Gantz government, the agreement with Iran should not include Tehran’s missile program or its regional activities, which Vilnai dubs “playing across the entire field.” That approach places paramount importance on the existential threat to Israel posed by the ayatollahs’ nuclear ambitions. Diverging to additional issues is a waste of energy.

“Israel will be able to deal with Iran on conventional issues. It is already under missile and rocket threat today by Hezbollah and others. The only game changer is the nuclear threat and that is where all the attention should be directed,” a member of the team of experts told Al-Monitor on condition of anonymity.

Meanwhile, Iran’s Supreme Leader Ayatollah Ali Khamenei said this week that his country could enrich uranium to 60% purity if needed and would never yield to US pressure. “Iran’s uranium enrichment level will not be limited to 20%. We will increase it to whatever level the country needs. … No one can stop Iran,” he said.

“Our main problem,” a former senior military official told Al-Monitor on condition of anonymity, “is that the Iranians are far more adept at these types of negotiations than the Americans are. We are dealing with a nation of traders used to convoluted and devious negotiations, while the United States is a world power accustomed to everyone bending to its will. This is nowhere near a level playing field.”

An Israeli diplomatic source told Al-Monitor on condition of anonymity, “Every week that goes by without the start of the Israeli-American dialogue is a horrible waste of time. Time is running out. Instead of getting down to work with the Americans, we are wasting time on policy discussions and tiffs between Netanyahu and Gantz.”

The source added that Israel must “make a concerted effort to engage with the administration, to hand over all our quality intelligence and try to clarify our reasoned position.” Although the sides are in touch, the contacts are on a back burner. However, that low flame could erupt into a major fire if and when it turns out that the administration is already well on its way back into the agreement with Iran, while Israel continues to debate with itself how best to proceed.