Conflicting messages from Israeli authorities cause tens of thousands of Palestinian laborers to be stuck in the West Bank, unable to reenter Israel for work. 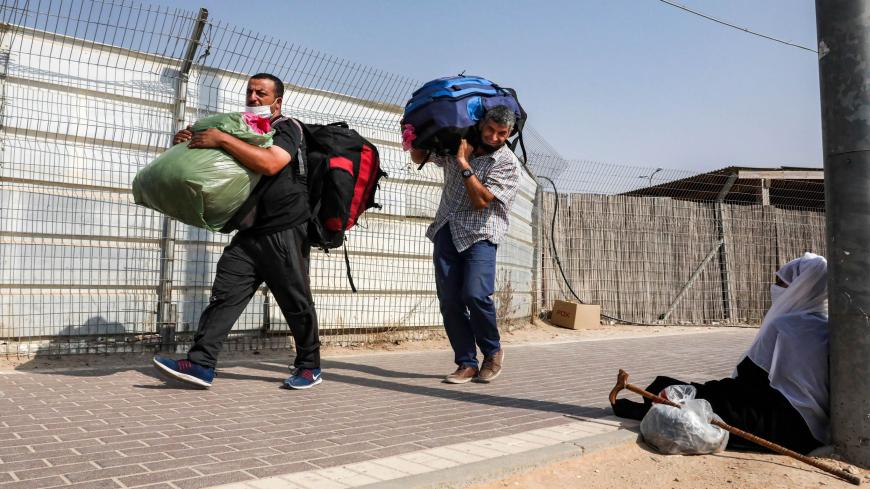 This picture taken from the Israeli side of the Mitar checkpoint shows Palestinian workers crossing out of Israel a day ahead of Rosh Hashana (Jewish New Year) and of a nationwide lockdown aimed at curbing a spike of coronavirus cases, Sept. 17, 2020. - Hazem Bader/AFP via Getty Images

There is a strange reason why work has ground to a halt on hundreds of construction sites, fields and greenhouses all across Israel. On Friday Feb. 5, tens of thousands of Palestinian laborers returned to their homes in the West Bank for the weekend. They have since been prevented from returning to work because of the closure order. This has a devastating impact on the work and salaries of countless Palestinians and their families; the money that they earn in Israel is an essential part of the Palestinian economy, particularly during the coronavirus pandemic.

A total of some 45,000 Palestinian laborers — out of a total 80,000 with regular work permits — have been living within the Green Line since the current closure was first imposed in January, as a result of a spike in coronavirus cases. According to the Health Ministry, although there has been a high rate of vaccination in Israel, there has nevertheless been a spike in infections, due to new mutations of the virus from Britain and South Africa.

Ahead of the lockdown, an agreement reached between the ministries of Defense, Housing and Health allowed workers to enter Israel from the West Bank on condition that they remained in the country, and did not return to their homes. Contractors and farmers, who employed these laborers, were then required to provide them with accommodation and food.

Then on Feb. 5, after a heated Cabinet meeting the night before, these contractors and farmers were informed that as a result of a discussion in the Defense Ministry, workers who had not seen their families in weeks would be allowed to return to their homes, on condition that they would return to work on the morning of Feb. 7. A senior government official told the press that this information was relayed by the Office of the Coordinator of Government Activities in the Territories (COGAT), after a discussion led by Defense Minister Benny Gantz.

Thousands of Palestinians then returned to the West Bank, intending to return to work on Feb. 7. But then, just a few hours later, COGAT sent a different message to the Housing Ministry overturning the previous announcement. The closure was still in place, meaning that workers who had left would not be allowed to return to work within the Green Line. Since the ministry only received the second message late on Friday afternoon, it was Saturday night before it was relayed to the contractors and farmers, and from them to their workers, who were already at home.

The Contractors Union told Al-Monitor, “On Friday [Feb. 5] we were informed by representatives of the government that Defense Minister Benny Gantz decided to open the border crossings into West Bank territories on a daily basis for workers of all types. As a result of this, most Palestinian workers returned to their homes in the West Bank after spending three weeks working and sleeping in facilities within the Green Line. That evening, Gantz changed his mind deciding that the defense establishment would not be opening the border crossings for these workers. The result now is that we are missing almost 65,000 Palestinian workers in construction out of 80,000 with permits [65,000 had special permits before the closure] and other essential infrastructures. A large part of this branch of the economy will grind to a halt if Gantz doesn’t change his mind.”

The Defense Ministry spokesperson’s office and the office of Gantz told Al-Monitor unequivocally that there has been no change to the current instructions, since the closure went into effect four weeks ago. In other words, Palestinian workers were not allowed to enter Israel during the lockdown. What they failed to provide was an explanation for the contradictory statements given to the Housing Ministry. Furthermore, they refused to confirm or deny that they conveyed such information.

As a result of the confusion, several thousand Palestinian laborers tried to reenter Israel Feb. 7, only to be informed at the border crossings that the closure remains in place and that they cannot reenter.

The contractors appealed to Housing Minister Yaakov Litzman, who immediately sent a letter to Gantz, saying, “Preventing the daily crossing of Palestinian workers will bring all construction activity to a halt.” Litzman estimates that the monthly output of the construction industry is 7 billion Israeli shekels ($2.15 billion). Return to full work capacity would take about two months, meaning that the economy would lose 14 billion shekels in that time. The daily extent of construction work amounts to the enormous amount of 308 million shekels ($95 million) per day, of which 203 million shekels ($62 million) covers work that Palestinian laborers are involved in.

Eldad Nitzan, head of the Federation of Foreign Construction Workers Unions, warned the housing minister that the lack of foreign workers could delay the transfer of new housing units by as much as six months and lead to a delay in the start of new construction projects.

Mustapha Abdullah Natshe from the Hebron region in the West Bank, who heads a group of workers at a construction site in Rishon LeTzion, was one of the laborers who returned home for the weekend after being told he could by his contractor. “They told us we could leave and then come back on Sunday. I missed my kids. I missed my mother. I needed to see my family. After all, we work so hard to support them. The contractor called me on Saturday night to tell me that the authorities changed their minds, and that we would not be allowed to return. I told him that I would try anyway. That morning I went to the Tarqumiyah crossing and they wouldn’t let me in. What do I do now? Who will pay our salaries, when we are at home? It’s not right.”

But many other workers, possibly thousands, did find a way back into Israel. They took advantage of breaches in the border fence, particularly in the area west of Bethlehem and Hebron.

One of them was also a worker from the Hebron region. He used such a breach to get back to his job in Beit Shemesh, a city in the midst of a frenzied construction boom. He explained that he had no choice. His family’s business, a furniture store in the town where he lives, has not made any money in close to a year because of the coronavirus pandemic, and he is the family’s only source of income. “If I don’t bring them money for food, who will? They told us that Gantz made a mistake. Will he buy food for my children? It’s a good thing that the contractors gave me an advance. They even helped me transfer the money back to my family at home,” said the worker, who spoke with Al-Monitor on condition of anonymity.

It is now expected that the laborers will be allowed to return to work over the course of next week.

Once again, this story highlights the dependency of the Palestinian economy on tens of thousands of laborers employed in Israel. According to data provided by the Israeli civil administration, they brought in 750 million shekels ($231 million) per month before the coronavirus outbreak, which were the wages of all Palestinian workers in Israel and in West Bank settlements. In 2020, after the pandemic struck, this dropped to around 600 million ($185 million), largely because of layoffs in multiple sectors. At the same time, it is now expected that with rapid vaccinations in Israel and the anticipated reopening of different branches of the economy, Palestinian laborers will also be returning to work.