Palestinian workers at the Yamit factory in a West Bank industrial zone are striking for their first substantial raise in decades. 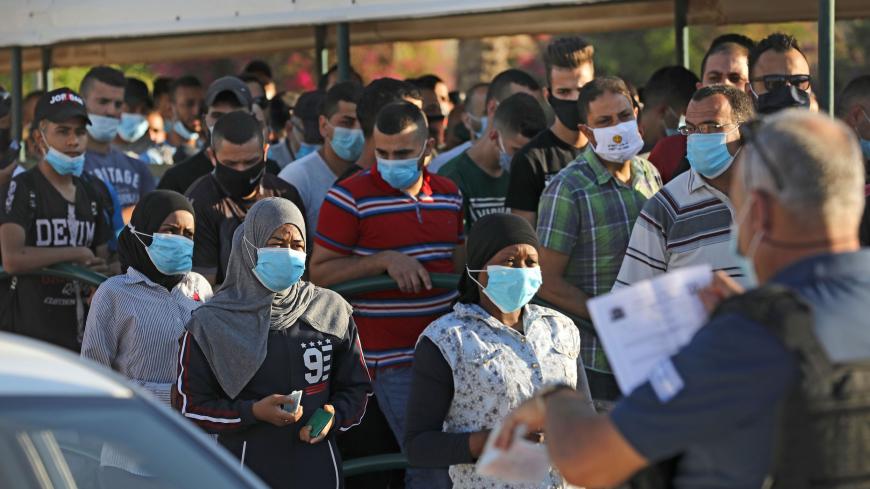 Palestinian workers wearing masks against COVID-19 line up for a security check at the entrance to Israel's Mishor Adumim industrial zone near the Maale Adumim settlement in the West Bank east of Jerusalem, on July 1, 2020. - MENAHEM KAHANA/AFP via Getty Images

The story of Israeli factories in the legally ambiguous West Bank industrial zones is one of economics and politics, and the coronavirus crisis has thrown its dynamics into stark relief as Palestinian laborers fight for the same salaries as their Israeli counterparts.

Some 80,000 Palestinian workers enter Israel every day. According to data provided by the Israeli Civil Administration, a branch of the Ministry of Defense that serves as a liaison between the Palestinians and the Israeli authorities, the workers earn an average of 6,000 shekels a month ($1,800). While this amount is roughly the minimum wage for Israeli workers, it is about four times the average wage in the Palestinian territories. Another 30,000 Palestinians work in the West Bank, mainly in industrial zones adjacent to Israeli settlements. A few more thousand work in construction. According to the Civil Administration, the salaries of these working in West Bank settlements are only slightly lower than those of Palestinians working in Israel proper, averaging about 5,500 shekels ($1,750) per month. They are also eligible for the conditions and benefits provided by Israeli law such as pensions, sick pay and paid vacation time.

A senior Civil Administration official told Al-Monitor that the income of these 120,000 workers amounts to more than a quarter of the total income in the West Bank in 2019. That figure is even higher this year because of the pandemic, which has devastated the Palestinian economy. As Israel relies heavily on Palestinian laborers, particularly at construction sites, even at the height of infection waves, workers who would otherwise be in lockdown were allowed to enter Israel.

The Supreme Court ruled in 2007 that Israeli law applies to Palestinian laborers employed in Israel and in West Bank settlements. Nine judges decided unanimously that the nationality of the workers could not be used as an excuse for employers to offer them working conditions that differ from those afforded to their Israeli counterparts.

The ruling applies to all Palestinian laborers working in Israel and in the settlements. However, it does not apply to the Nitzanei Shalom industrial park, built in the 1990s, soon after the signing of the Oslo Accords, near the Palestinian city of Tulkarm and along the separation fence. The Yamit plant, which manufactures water filters for agriculture and home use, is located in this industrial zone and therefore not subject to the ruling or Israeli law in general.

The factory employs 80 Palestinians who earn between 5,000 and 6,000 shekels ($1,600 and $1,900) per month. Some of those workers have been at the factory for two decades or more and now that they have considerable professional experience, they want raises. They even organized as a union with the Israeli labor organization Maan.

Negotiations with the factory began last year, but they dragged on for months because of the coronavirus. Finally, the factory’s owner Ofer Talmi informed them that he could not meet their demands because of the economic crisis resulting from COVID-19. But the workers refused to concede. On Dec. 31, 2020, they declared a strike. Surprised, Talmi sent an angry email to the head of Maan, Assaf Adiv, saying that he meets all the legal obligations to his workers. Then he added, “The Land of Israel belongs to the Jewish people. As a result, I am unwilling to have Palestinian workers with any connection to the state of Israel whatsoever.” Furious about his response, the striking workers released the email to the Palestinian and Israeli media.

Halil Shihab, one of the striking workers, said, “We’ve been working for years for minimum wage. We are professionals and we get minimum wage. Now he says that he doesn’t want to give his employees basic conditions because they are Arabs — not because he can’t afford it.”

Realizing the magnitude of his mistake, Talmi released a letter in Arabic apologizing to his workers and warning that if the strike continues, he will be forced to close the factory. He promised them 1,000 shekels ($320) each if they returned to work and said that he would renew negotiations over pay. “I want to apologize and take back what I wrote in my previous email about the right to the Land of Israel. It was written in a moment of extreme duress. … It is very hard for me to see the gates of our factory closed, since this could have serious implications on all of our livelihoods. We are in a difficult period and the strike hurts all of us. It threatens our very existence.”

According to the factory’s management, Adiv shared the first letter with anti-Israel organizations like the Boycott, Divestment and Sanctions movement, which has used it to attack Israel. His motives, they say, were entirely political. Meanwhile, the factory’s owner told Al-Monitor, “Yamit has employed Palestinian workers for over 35 years now. It operates according to the law and grants them all sorts of rights and benefits, including better pay, pensions, sick pay and worker's compensation. Assaf Adiv of Maan is making cynical use of this difficult time, knowing that Yamit is contending with enormous difficulties because of the coronavirus, like so many other factories and industries in Israel and around the world. This attempt to interfere, supposedly on behalf of some ideology or other, causes enormous damage to the otherwise healthy working relations and genuine coexistence that has been a hallmark of this factory for years. ”

Adiv denied the accusation. In a conversation with Al-Monitor he said that all he wanted was to obtain better working conditions for experienced professionals. If Talmi had just declared his willingness to raise their salaries once the crisis was over, the whole situation would have been resolved. Adiv also claimed that by never contributing to the workers’ pension fund, Talmi has saved millions over the years.

Ali, another worker at the factory, spoke to Al-Monitor about the conflict. Asking that his full name not be used, he said, “I am willing to forgive Ofer Talmi, but he needs to realize that we deserve more. If he really supports coexistence, let him show us that he is prepared for it. We would then help him get the factory through this crisis.” If that happens, the industrial zone model could survive. If not, it may be in serious danger.