Over 105,000 Palestinian workers in Israel vaccinated with first dose

Israel’s Coordinator of Government Activities in the Territories said yesterday that over 105,000 Palestinians who cross into Israel to work have received the first coronavirus vaccination dose over the last two weeks. 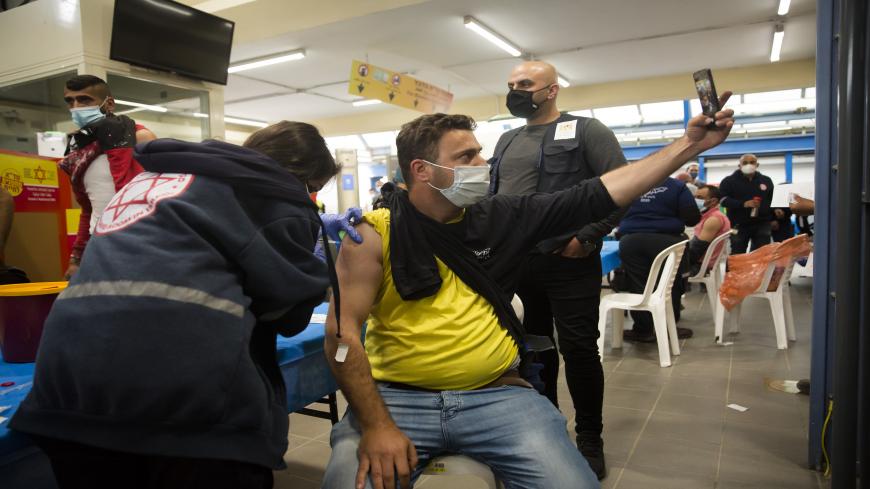 A Palestinian man who works in Israel takes a selfie as he receives the first dose of a Moderna COVID-19 vaccine by an Israeli medical worker at the Meitar crossing checkpoint between the West bank and Israel, March 9, 2021. - Amir Levy/Getty Images

The Israel Defense Forces' Coordinator of Government Activities in the Territories (COGAT) reported March 18 it had vaccinated over 105,000 Palestinians who cross into Israel to work over the last two weeks. The workers are expected to get the second dose in about three weeks.

COGAT head Brig. Gen. Fares Atila said in a statement, “Over the past two weeks we have taken several steps so that the campaign for vaccinating West Bank Palestinian workers would be successful, as this is a prime national priority. Today we conclude the operation (its first stage) with an impressive number of more than 100,000 Palestinian laborers vaccinated. I congratulate the workers on their response and willingness — which take us one step further in curbing the spread of the pandemic in the region. This is meaningful news for the Israeli and the Palestinian public health and economy alike. COGAT will continue its efforts, with all the relevant bodies, to protect and preserve the health, well-being and economic well-being of residents in the region.”

According to COGAT, some 120,000 Palestinians hold current special work permits for Israel and the settlements. Thus, a great majority of them were evidently interested in getting vaccinated.

Israel started vaccinating Palestinian workers on March 7, after long weeks of internal debates and following international pressure. Israeli Health Ministry officials and other health experts had said repeatedly that vaccinating Palestinian workers is not only Israel’s humanitarian responsibility, but also in Israel’s interest to thwart the pandemic.

The Israeli decision to vaccinate apparently came after a rare visit of Health Ministry officials to the West Bank town of Ramallah on Feb. 19, where they met with Palestinian counterparts and visited the coronavirus ward at the city’s hospital.

Israeli authorities set up eight vaccination centers at crossing points into Israel, and four centers in West Bank settlements, mostly in industrial parks where many Palestinians are working. Additional centers might be set up in the coming days. As aforementioned, these vaccination centers will reopen on April 4, for administering the second vaccine dose. According to the Health Ministry, the centers are manned by Israeli health workers, together with representatives of COGAT. Israeli employers were responsible for setting up vaccination appointments for their employees.