More than 122,000 Palestinians working in Israel or its settlements are eligible to receive the coronavirus vaccine. 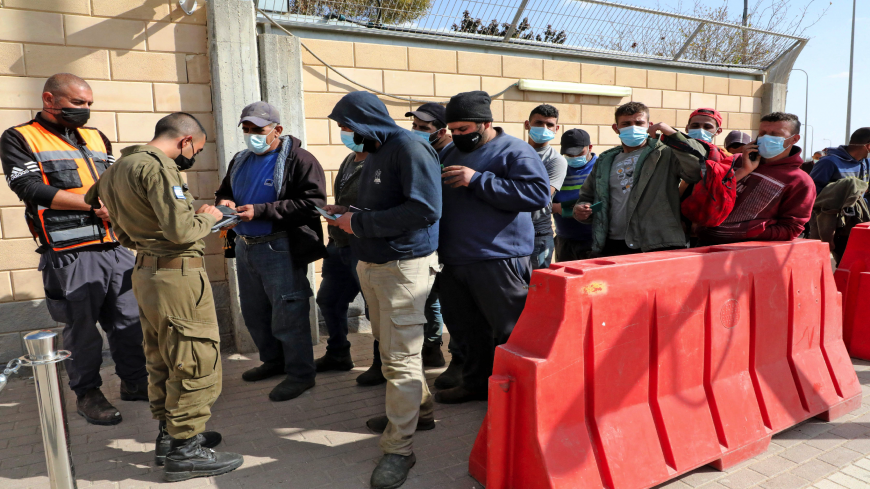 Palestinian men working in Israel wait to receive a dose of the Moderna Covid-19 vaccine at the Israeli-held Mitar checkpoint south of Hebron in the occupied West Bank on March 8, 2021. Israel launched a campaign to vaccinate some 100,000 Palestinians in the West Bank who hold permits to work in Jewish settlements in the occupied territory and inside the Jewish state. - HAZEM BADER/AFP via Getty Images

Israel has begun vaccinating Palestinians working in Israel and the occupied West Bank as part of a two-week voluntary COVID-19 vaccine drive.

Israel, which has one of the world’s highest vaccination rates, had come under fire for failing to include the roughly 5.2 million Palestinians living in the West Bank and Gaza in its inoculation drive. Israeli officials argued the Oslo Accord instructed the Palestinians to manage their own health care, including the estimated 122,000 Palestinians working in Israel or its settlements.

But human rights groups said Israel had a responsibility to administer the vaccine to those living under its occupation. Israel captured the West Bank, an area the Palestinians seek for a future state, during the 1967 war.

The Coordinator of Government Activities in the Territories (COGAT), the Israeli military liaison in the Palestinian territories, announced late last month it would provide Moderna’s COVID-19 vaccine to all Palestinians with Israeli work permits. On Monday, COGAT announced that some 5,000 Palestinian workers had received a jab.

According to The Times of Israel, immunization centers opened at eight West Bank crossings on Monday; a further four are expected to open at industrial centers in the territory on Tuesday.

The ruling Palestinian Authority had only acquired 12,000 doses for its population — 2,000 from Israel and the rest from Russia. Under the World Health Organization’s COVAX initiative, the Palestinians are expected to get 37,440 doses of the Pfizer vaccine this month and 24,000 doses of the AstraZeneca vaccine.

Israel, meanwhile, is reopening much of its economy after having successfully vaccinated nearly 40% of its population since January. The country has so far administered the vaccine to more than 5 million of its citizens, with over 3 million having received both doses.