Faced with international criticism, and also for its own interest of curbing the spread of the coronavirus pandemic, Israel transferred to the Palestinian Authority a first shipment of 2,000 Pfizer vaccine doses. 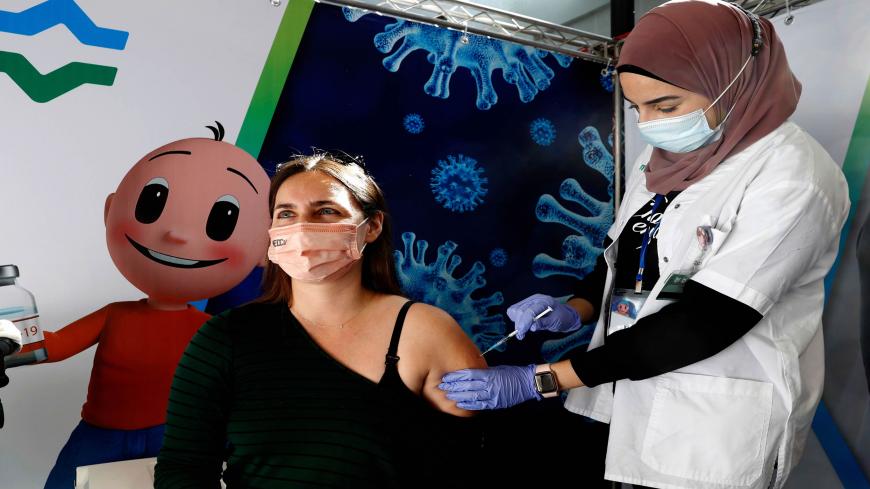 A health-care worker administers a dose of the Pfizer-BioNtech COVID-19 vaccine at Clalit Health Services, in a gymnasium in the city of Petah Tikva, Israel, Feb. 1, 2021. - Jack Guez/AFP via Getty Images

Israel transferred today 2,000 coronavirus vaccine doses to the Palestinian Authority (PA). The Pfizer-made vaccine doses were delivered through the Betunia trade crossing point in the southwest of Ramallah in the West Bank. A second delivery of 3,000 doses is expected in the coming days, with both deliveries destined for Palestinian health-care workers. It was the first time Israel handed over to the Palestinians significant coronavirus vaccines from its own supply.

Last December, shortly before Prime Minister Benjamin Netanyahu launched a mass vaccination drive, Palestinian senior officials said they did not approach Israel for help in obtaining vaccines. An unnamed official at the Palestinian Ministry of Health was quoted by the Jerusalem Post as saying, “We are working on our own to obtain the vaccine from a number of sources. We are not a department in the Israeli Defense Ministry. We have our own government and Ministry of Health, and they are making huge efforts to get the vaccine.”

Reportedly, the Palestinians have been focusing their efforts on obtaining the Russian Sputnik vaccine and the Chinese-made vaccine. In parallel, they are hoping for aid from the internationally backed mechanism COVAX, designed to provide developing countries with coronavirus health care and vaccination doses. Plans are for COVAX to provide doses to immunize around 20% of the Palestinian population, though it is now clear that deliveries will not arrive to the West Bank before March. The Palestinian Health Ministry has also announced recently it had signed a contract with AstraZeneca pharmaceutical firm. A first shipment is expected at the end of February at the earliest.

Russian President Vladimir Putin had offered the PA some 5,000 doses as a personal gift. Israel had authorized the transfer of the Russian doses, which were expected to arrive last week at Ben Gurion Airport, to be transferred to the West Bank by truck. Eventually, the shipment was delayed, reportedly due to technical problems, with no new delivery date in sight. Thus, the cash-stripped PA was left with no vaccines at all. Israel, for its part, has advanced rapidly with its mass-vaccination campaign. Close to 3 million people (32% of Israel’s population) have now received the first dose of the vaccine, and 1.7 million people (almost 19% of the population) have received the second dose. Israel has also vaccinated some of its citizens living in West Bank settlements.

Indeed, the Palestinian leadership in Ramallah had not ask Israel formally to inoculate wide swathes of its population. Still, some reports claimed that Jerusalem had rejected a discreet request by Ramallah for 10,000 vaccine doses for its front-line medical workers. Then, on Jan. 26, Palestinian Foreign Minister Riyad al-Maliki openly criticized Israel for failing to provide coronavirus vaccines to the Palestinians.

Faced with growing international pressure, and as a humanitarian gesture, Jerusalem decided to change its stance. Adding to the humanitarian reasoning, Israeli health experts pointed out that the country will not be able to curb the spread of the coronavirus if Palestinians are not vaccinated. Thus, Defense Minister Benny Gantz announced Jan. 29 that Israel had agreed to transfer 5,000 vaccine doses to the Palestinians to immunize front-line medical workers. A statement by the Defense Ministry said, “In accordance with the recommendation of the Defense Minister and the Coordinator of Government Activities in the Territories, the political echelon approved [on Friday] the transfer of 5,000 vaccine doses to medical teams in the Palestinian Authority.”

It is still unclear whether any of the vaccine doses handed over to the PA will be transferred to the Gaza Strip. Both Israeli and Palestinian officials have reportedly refused to comment on that issue.