In order to accelerate the supply of COVID-19 vaccines to the Palestinians, Israel started transferring 1 million Pfizer doses. 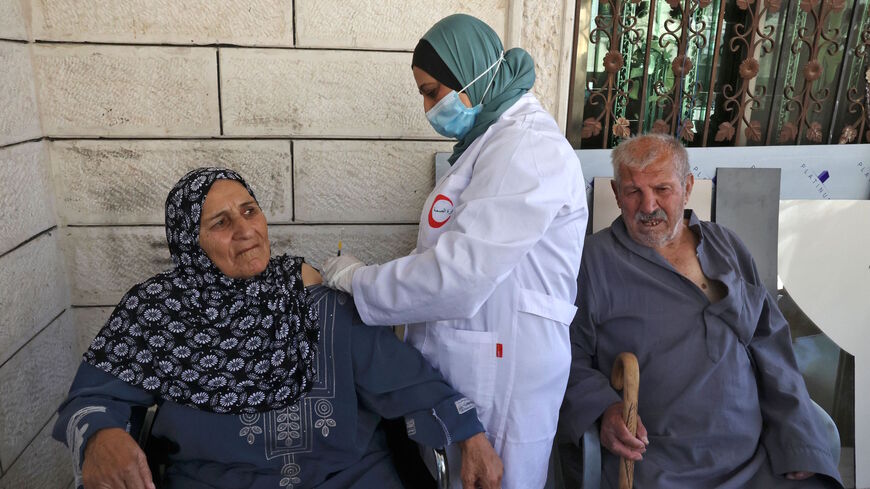 A Palestinian member of a Health Ministry mobile unit vaccinates elderly Palestinians against COVID-19 in the village of Dura near Hebron in the occupied West Bank, on June 9, 2021. - HAZEM BADER/AFP via Getty Images

The office of Prime Minister Naftali Bennett issued a joint statement June 18 with the Ministry of Health saying Israel plans to soon transfer some 1 million Pfizer coronavirus vaccine doses to the Palestinians.

The statement said Israel would transfer doses that are about to expire, and that in exchange, in September and October, Israel would receive shipments of Pfizer vaccines that were originally meant to go to the Palestinians. “The plan was approved based on the fact that Israel’s current vaccine stockpile is sufficient for its current needs,” the statement said.

Shortly after the statement, the Israel Defense Forces unit responsible for liaison with the Palestinians published a short video, showing boxes of vaccines being transferred to Palestinian hands. The post further said that 100,000 doses were transferred June 18 to the Palestinian Health Ministry, as part of the agreement reached between both sides.

The move was agreed upon June 17 during a meeting of new Israeli Health Minister Nitzan Horowitz with senior Health Ministry officials and other official representatives. It comes after Israel faced intense criticism from rights groups at home and internationally and from medical professionals for its failure to significantly assist the Palestinians in the battle against the coronavirus.

Faced with this criticism, the Netanyahu government had agreed in principle to assist the Palestinians with their vaccination campaign, but in reality, only a relatively limited number of doses were transferred to the Palestinian Authority. In all, only 260,000 people have received their two COVID-19 doses in the West Bank and Gaza Strip, compared with over 5 million in Israel.

Israel did assist in the vaccination of Palestinian workers working in Israel in the framework of a coordinated campaign carried out at West Bank crossing points. It also transferred some doses to help vaccinate health workers. Still, it did not assist in massive West Bank and Gaza vaccination campaigns Israeli health professionals were pushing for. On May 6, Health Ministry Director General Chezy Levy urged Israeli decision-makers to help vaccinate the Palestinians. “We need to help the Palestinians and quickly assist their vaccination program because it can affect the morbidity here among us. We have to give or sell the stockpiles of vaccines that we have, or help them find vaccines. As soon as a [government] decision is made, we will do so quickly.”

Reports in the Israeli media said the Biden administration had been pressuring Israel for the past few months to transfer vaccine doses to the Palestinians. But in order for that to happen, the government needed recommendations by the relevant bodies, including legal opinions in favor of such a move.

In February, the Israeli press reported on an initiative by the Netanyahu government to donate 1,000 to 5,000 vaccine doses to some 19 countries seen as friendly to Israel. At the time, Defense Minister Benny Gantz criticized the initiative and demanded that the Security Cabinet be convened for deliberations on the matter before such a decision was made. “This is not the first time that significant security and diplomatic decisions are made behind the back of the relevant officials, with possible harm to the security of the state, foreign relations and rule of law,” Gantz said.

The Palestinian Health Ministry said June 18 that it had refused, on June 17, a condition set by Israel not to transfer some of the doses to Gaza. The ministry said Israel had withdrawn this condition June 18, which was how an agreement was finally reached.