The PA said Friday that it wouldn't accept the Pfizer vaccines provided by Israel because the doses were too close to expiring. 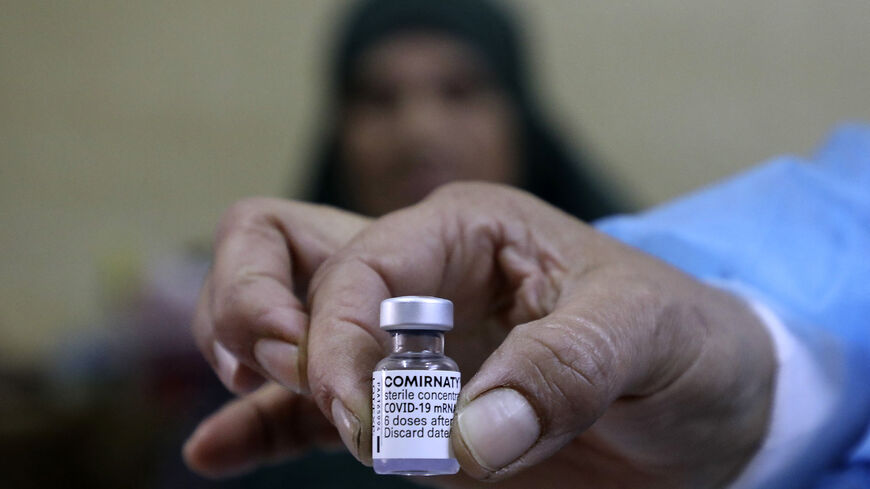 A Palestinian Health Ministry nurse displays a vial of the Pfizer coronavirus vaccine, otherwise known as Comirnaty, in the village of Dura near Hebron in the occupied West Bank on April 20, 2021. - HAZEM BADER/AFP via Getty Images

The Palestinian Authority (PA) on Friday called off a deal with Israel to receive 1 million doses of the Pfizer coronavirus vaccine, which Ramallah said were nearly expired.

“The ministry found that the vaccines we received today from Israel did not meet the specifications, so the government decided to return them,” Palestinian Health Minister Mai al-Kail said.

"They told us the expiration date was in July or August, which would allow lots of time for use,” al-Kail said. "But (the expiration) turned out to be in June. That's not enough time to use them, so we rejected them.”

Hours earlier on Friday, the Israeli government and the PA announced a deal that would have involved Israel sending 1.4 million Pfizer vaccines to the PA in return for receiving a similar shipment from Ramallah in September and October. A statement from the office of Prime Minister Naftali Bennett said the vaccines would “expire soon.”

More than 100,000 doses were reportedly delivered before the deal was scrapped Friday. Video published to Twitter from the Israeli military liaison in the Palestinian territories showed the boxes being loaded onto delivery trucks.

The Israel plan to send vaccines to the Palestinians came amid pressure from Palestinian activists and human rights organizations who said the Israeli government had failed to do enough, as an occupying power, to ensure the roughly 5.2 million Palestinians living in the West Bank and Gaza received vaccines.

Although Israel did administer vaccines to Palestinians holding Israeli work permits, the government of then-Prime Minister Benjamin Netanyahu argued that under the Oslo accords, the Palestinians are required to manage their own health care.

Israel has one of the world’s highest vaccination rates, with more than half of eligible Israelis fully inoculated against the virus. Across the Gaza Strip and West Bank, just 260,000 people are fully vaccinated, compared with over 5 million in Israel.