Israel’s Health Ministry is reportedly awaiting permission to use the country's stock of Moderna vaccines for Palestinians working in Israel. 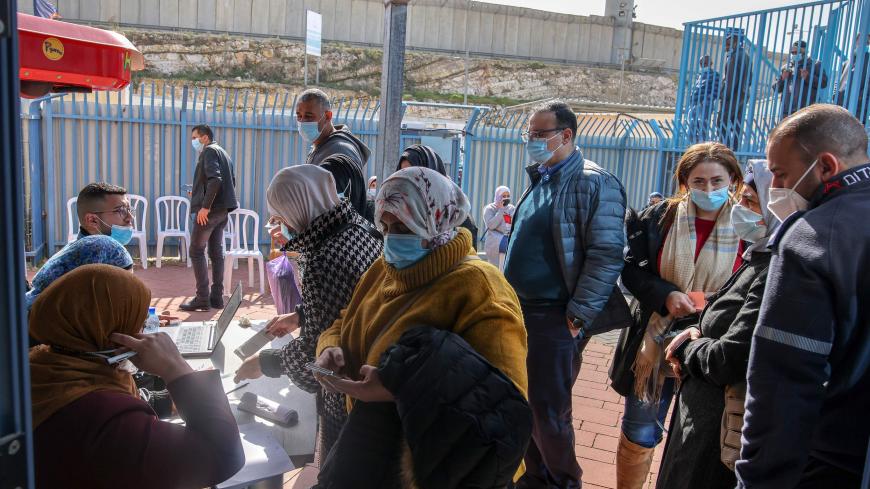 Palestinians wait to receive doses of the the Pfizer-BioNTech COVID-19 coronavirus vaccine provided by Israel's Magen David Adom medical services at the Qalandia checkpoint on the crossing between the West Bank city of Ramallah and Israeli-annexed east Jerusalem, on Feb. 23, 2021. - AHMAD GHARABLI/AFP via Getty Images

Israel keeps sending mixed signals on vaccinating Palestinians. There have been positive signs as the country advances on vaccinating the 120,000 West Bank residents who work in Israel. It has also offered some vaccine doses to the Palestinian Authority to vaccinate health workers. However, there is still no comprehensive policy on the matter.

The office of Prime Minister Benjamin Netanyahu announced today it is offering what it called a symbolic number of doses for medical staff in the Palestinian Authority and Honduras.

The Feb. 11 vaccination campaign was hailed in the Israeli press as a first step toward vaccinating all the West Bank Palestinians who work in Israel. Palestinian Authority officials said Feb. 19 that Israel had agreed to vaccinate 100,000 Palestinian workers, but Israel’s Health Ministry did not confirm the news.

The Palestinian announcement came after an unusual event earlier in the day in Ramallah. Seniors from Israel’s Health Ministry met with their Palestinian counterparts and visited a coronavirus ward in the city. The Israeli delegation included the ministry’s director Chezy Levy, head of Public Health Services Sharon Alroy-Preis and coronavirus commissioner Nachman Ash.

The visit was organized by Israel’s Coordinator Of Government Activities in the Territories and made in secret. It was only after the encounter that the ministry said in a statement, “Understanding that Israel and the Palestinians live in one area and that an outbreak of COVID-19 among the Palestinian Authority may also affect the infection rate among Israeli residents, senior ministry officials visited with the Palestinian Authority Health Ministry and received a briefing on the coronavirus situation in the PA, morbidity data and the epidemiological investigations that are taking place.”

Israel is under international pressure to both vaccinate Palestinian workers in Israel and assist the Palestinian Authority in its vaccination drive.

Pressure has grown in recent days over revelations that Israel had received a shipment of around 100,000 Moderna vaccine doses earlier this year but has yet to distribute them. The Health Ministry explained that because the administration of the Moderna vaccines is different from the Pfizer ones, it chose to wait to prevent confusion. Later, Israeli health authorities recommended that the Moderna doses be administered to a specific group by a specially trained staff.

Israel has too few doses of the Moderna vaccine to use it for the Israel Defense Forces, and more than are needed to vaccinate all prisoners in Israel. It corresponds more or less to the number of Palestinian workers in Israel. Also, it requires less rigorous temperature control than the Pfizer vaccines and could be easily transferred to West Bank border crossings, should vaccination centers be set up there.

On Feb. 18, seniors at the Health Ministry said that Israel is considering using the Moderna doses to vaccinate Palestinians working in Israel. There has been speculation that the Feb. 19 Ramallah meeting was part of this internal discussion in Israel.

Pressure to vaccinate Palestinian workers grew following reports on the vaccination drive for undocumented workers in Israel, a population without health insurance and often reluctant to engage with official Israel. At the beginning of February, the Tel Aviv municipality opened a vaccination center for foreign workers, but Palestinians with temporary or permanent residence permits were reportedly turned away. Some of them had received permits after assisting Israeli security agencies in different ways. Others include Palestinians who fear for their lives in the West Bank for one reason or another.

Israeli authorities had said they would enable the transfer of 5,000 vaccine doses to the PA for Palestinian health workers, but so far only a first shipment of 2,000 doses was delivered on Feb. 1. On Feb. 21, the World Bank called on Israel to consider donating its vaccine surplus to the Palestinians so that vaccination drives in the West bank and in Gaza could be accelerated. "In order to ensure there is an effective vaccination campaign, Palestinian and Israeli authorities should coordinate in the financing, purchase and distribution of safe and effective COVID-19 vaccines," read the report.