Israel has greenlighted an international operation to vaccinate against the coronavirus 7,000 Palestinian traders from the Gaza Strip who regularly travel through Israel and the West Bank. 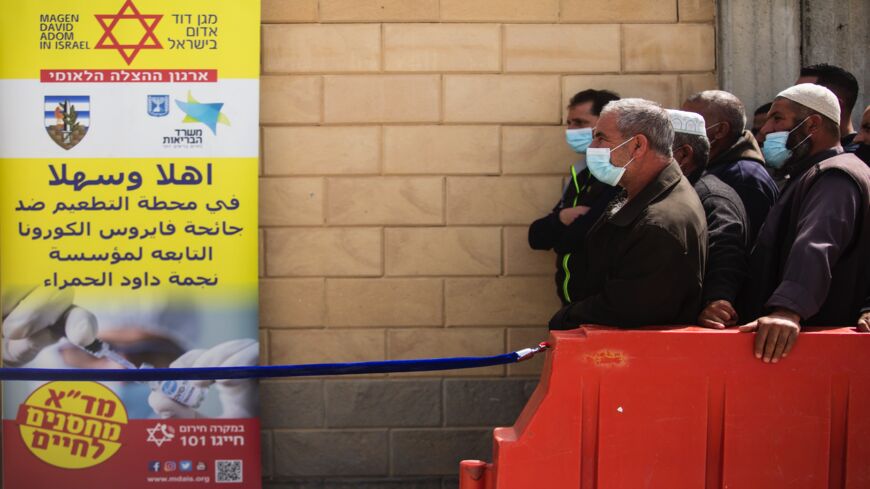 Palestinians who work in Israel wait in line to receive the first dose of a Moderna COVID-19 vaccine by Israeli medical workers in the Meitar crossing checkpoint between the West Bank and Israel on March 9, 2021, in Meitar, Israel. More than two months after starting a world-leading COVID-19 vaccination campaign for its own citizens, Israel began administering the Moderna vaccine to Palestinian laborers from the West Bank who enter Israel or Israeli settlements for work. - Amir Levy/Getty Images

Publications today indicate that Jerusalem has approved an international operation to vaccinate against the coronavirus thousands of traders from the Gaza Strip so that they can cross the border into Israel and travel to the West Bank. The operation is designed not only to reduce the growing spread of the pandemic in the Strip, but also to kickstart the Palestinian territories' struggling economy — two motivations that both Israel and Hamas share.

The outline agreed upon reportedly foresees the setup of a vaccination center at the Gaza Erez crossing point on the Israeli side. The center will be manned by foreign medical teams, probably by a humanitarian/relief organization. The Palestinian traders will be vaccinated with Pfizer doses, which is the same vaccine used by Israel in its immunization drive and recognized by Israeli authorities for the sake of the green passport system. Qatar will fund the purchase of the 14,000 doses for the two phases of vaccination of the 7,000 traders.

Contrary to the West Bank, with periodic openings of the crossing points, the pedestrian border crossing between Gaza and Israel was closed down after the outbreak of the pandemic, mainly at the initiative of Hamas. This has heavily impacted Gaza’s already faltering economy. For the West Bank, Israel has enabled laborers with working permits to stay on its territory. A vaccination campaign for some 100,000 Palestinian workers from the West Bank is underway at crossing points and at four industrial parks in Israeli West Bank settlements. Apparently, a similar program for Palestinian Gaza workers is not envisioned for the moment.

Over the past few months, the Palestinian Authority in Ramallah has independently contracted several vaccine providers, including AstraZeneca, Russia and China, to purchase doses, but very few of these doses arrived. Palestinian health authorities announced on March 21 they were starting to vaccinate the over-75s after receiving 60,000 vaccine doses through the international vaccination program COVAX. With Israel's agreement, 20,000 out of the 60,000 doses received by Ramallah were transferred to Gaza.