US President Joe Biden made his first call in the Arab world to Iraqi Prime Minister Mustafa al-Kadhimi, expressing strong support for Iraq. 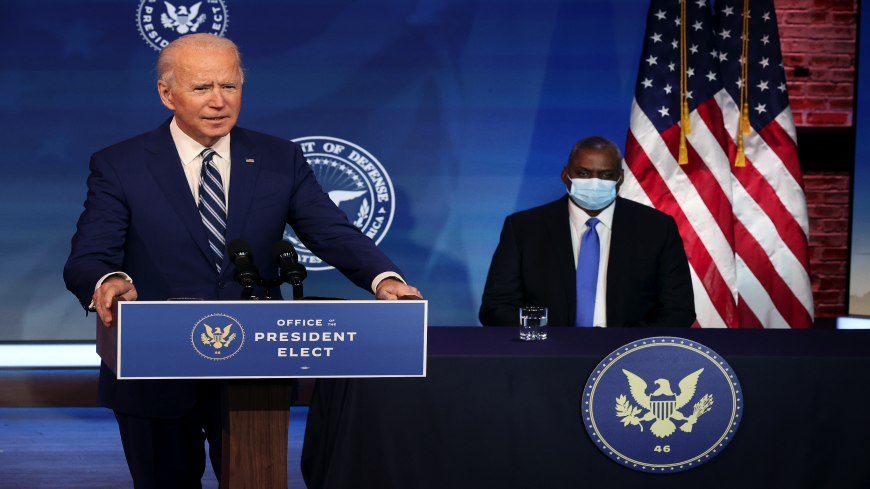 US President-elect Joe Biden (L) announces US Army (retired) Gen. Lloyd Austin (R) as his choice to be Secretary of the Department of Defense at the Queen Theater Dec. 09, 2020, in Wilmington, Delaware. The only African-American to have headed US Central Command, Lloyd, 67, is a four-star general who was in charge of American forces in Iraq from 2010 to late 2011. - Chip Somodevilla/Getty Images

Iraqi Prime Minister Mustafa al-Kadhimi received a call from US President Joe Biden on Feb. 23 — the first call from Biden to an Arab leader and the second call to the Middle East after Israel.

Discussions centered on bilateral relations, strengthening and developing partnerships, cooperation on supporting security and peace in the region, and continuing their partnership in fighting the Islamic State (IS), according to a tweet by Kadhimi.

Selecting Iraq as the first country to contact in the Arab world indicates that Iraq remains at the top of the US priority list in the Middle East.

This comes despite the fact that the United States is reducing its troops in Iraq as part of the US-Iraq strategic dialogue that began in 2020 to build a comprehensive framework between the two countries.

US military forces in Iraq were cut to 2,500 within about 6 months after it was more than 5,000. This number is the lowest level in the nearly two decades the United States has been in Iraq, according to the Pentagon.

The US troop reduction reflects "the increased capabilities of the Iraqi security forces," said former US Secretary of Defense Chris Miller.

The two leaders' focus on supporting the region's security and peace and continuing the fight against IS shows there is no change in US policy in Iraq in terms of counterterrorism and maintaining security.

This also reinforces Miller's statement last January that US troop reduction "does not equate to a change in US policy," adding, "We will continue to have a counterterrorism platform in Iraq to support partner forces with air power and intelligence."

This comes in conjunction with NATO's Feb. 22 decision to “expand the activities and increase the size of NATO’s training mission in Iraq.”

“Allied defense ministers [decided to increase] the size of NATO's [training mission in] Iraq from 500 personnel to around 4,000, and to expand training activities to include more Iraqi security institutions and areas beyond Baghdad,” NATO's statement read.

The above information supports Kadhimi's statement after talking to Biden that “strategic dialogue continues to serve as a roadmap for the future.”

In fact, strategic dialogue has reduced tension in the region without affecting the security status or harming Iraq's relationship with the United States, which already seems stronger and more strategic under Biden when compared with the former president, Donald Trump, whose interest in Iraq was mostly due to his agenda against Iran.

In terms of Iraq's security situation, Iraq has already proven its ability to take on IS recently, despite the reduction of US troops. Several high-ranking IS commanders were killed over the last few months by Iraqi forces, and a number of successful operations were launched in different parts of Iraq.

A military operation occurred last week in Tarmiyah in northern Baghdad, killing IS wali Shukor al-Mashhadani and destroying sleeper cells there. Last month, IS's highest commander in Iraq, Abu Yasser Al-Issawi, who serves as deputy caliph in the organization, was also killed. A large IS network was destroyed last December in southern Mosul by counterterrorism forces, killing dozens and cleansing the entire area.

Despite the abovementioned facts, rockets being fired at US facilities remains a big challenge for the Iraqi government in terms of maintaining its relationship with the United States.

Iraqi security forces captured Hosam Azergawi — the engineer of the rocket attacks last December that targeted US facilities, embassies and bases — along with other militants who were arrested during the investigation. The rocket attacks stopped after Azergawi's arrest but began again last week, as unknown militias attacked a US base in Erbil's international airport Feb. 16 and the US Embassy in Baghdad Feb. 22.

But Biden does not appear willing to give up on Iraq for the recent security breaches, and the two leaders agreed that people responsible for the recent rocket attacks against Iraqi and coalition personnel "must be held fully to account," according to a White House statement.

"Iraq will not be an arena for settling scores, and the absurd missiles are an attempt to impede the government's progress and embarrass it. But our security services will reach the perpetrators, and they will be brought before the public opinion," Kadhimi said Feb. 23 in a Cabinet meeting.

In terms of the economy, the United States is a key member of the Iraq Economic Contact Group that was formed last October to support Iraq during an economic crisis. The European Union, Japan and Saudi Arabia, among others, are members of this group.

Iraq prepared last year its first financial and fiscal reform plan known as the White Paper; the second part of the White Paper was released early this month. This year's budget is also the first budget formed based on an economic reform plan.

In terms of foreign relations, Iraq's recent openness to the world and its active diplomacy has created a more stable status for the country in the region and the world. Iraq has kept its strategic relationship with the United States a top priority in spite of the militias' actions.

Moreover, the Iraqi government has improved its relationships with Jordan and Egypt as part of the “New Levant,” a term used by Kadhimi during his trip to Jordan last year. Simultaneously, Iraq is improving its relationship with Saudi Arabia and the Gulf in general by getting them to invest in the country, connect power grids and participate in other projects.

This has not come at the expense of Iraq's relationship with Iran, which continues to grow. The Iraqi government is signing the Basra-Shalamcheh rail connection next week, connecting Iran's Shalamcheh border crossing to the port of Basra in southeast Iraq, as a sign of the growing relationship between the two countries.

All of the above indicates that Iraq will remain at the core of US policy in the Middle East despite the great challenges both countries face in maintaining their strategic relationship due to the ongoing conflict in the region between different axes.