The Iraqi government is trying hard to reduce tensions in the country and maintain a power balance between regional and international forces in order to initiate its reform plan. 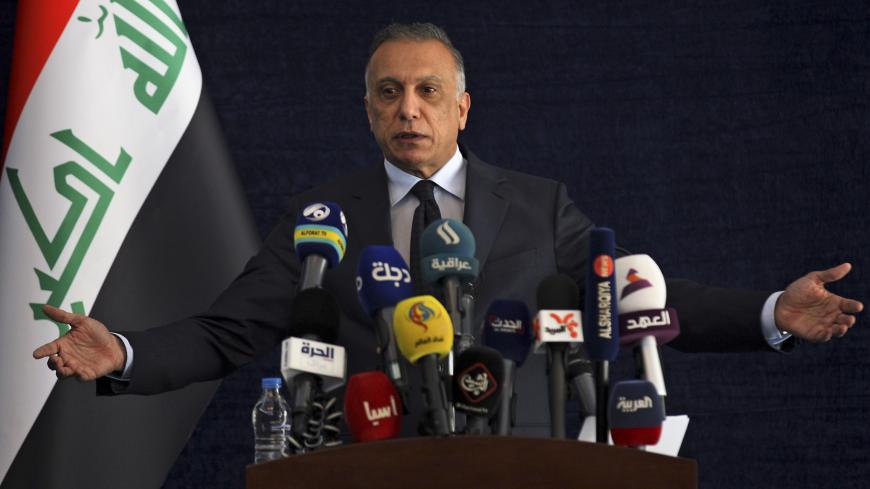 Iraqi Prime Minister Mustafa al-Kadhimi speaks during a press conference in Basra on July 15, 2020, during his first visit to the southern Iraqi province. - AHMAD AL-RUBAYE/POOL/AFP via Getty Images

In an attempt to remove Iraq from the conflict between Iran and its regional and international rivals, Iraqi Prime Minister Mustafa al-Kadhimi has planned and is taking his first trip as a package to three countries: Saudi Arabia, Iran and the United States. This way, he wants to send a message to all rival powers that Iraq's sovereignty should be respected and regional and international powers should not bring their conflicts into Iraq.

Iraq has been a center field for conflict since 2003 between different regional and international powers, and it has turned into a direct battleground between the United States and Iran after the assassination of Iran's top Quds Force commander, Maj. Gen. Qasem Soleimani, earlier this year, followed by Iran's bombing of US forces at Ain al-Asad air base in western Iraq's Anbar province.

The selection of Kadhimi was actually a settlement choice between Iraqi political parties to reduce the tension and find a solution to the regional and international conflicts on Iraq's territory.

Kadhimi has already initiated a strategic dialogue with the United States. The first session took place in June, and the second session will be held in Washington during Kadhimi's visit there. He is also planning to settle on arrangements with Iran and Saudi Arabia to end the use of any Iraqi space for conflict; instead, he'll seek to change the role of Iraq from battleground to a place of investment and a bridge to peace and cooperation.

The first station on Kadhimi's series of trips began in Saudi Arabia. The Iraqi ministerial delegation arrived in Riyadh July 19, headed by Finance Minister Ali Allawi. In attendance as well were the ministers of oil, planning, electricity, agriculture, sport and culture. Saudi Arabia has expressed willingness to help Iraq in all of these fields, including renting agricultural lands in Anbar province for investing in industrial agriculture and building stadiums in Iraqi cities, among other projects. The delegation also discussed the activation of Coordination Council between the two countries which will be in charge of managing all projects between Iraq and Saudi.

The prime minister was supposed to join the delegation July 20, but his trip to Saudi Arabia was canceled due to the unexpected sickness of King Salman bin Abdul-Aziz Al Saud, who was taken to the hospital.

Saudi Foreign Minister Faisal bin Farhan Al-Saud announced July 20: “The kingdom appreciates the choice of the Iraqi prime minister to choose Saudi Arabia for his first trip after taking office. And to celebrate this extremely important visit and provide all means of success for it, our wise leadership, in coordination with our brothers in Iraq, opted to postpone the visit until after the departure of the Custodian of the Two Holy Mosques from the hospital.”

The visit to Tehran is scheduled for July 21. Iranian Foreign Minister Mohammad Javad Zarif made a quick visit to Baghdad on July 19, where he met with Kadhimi, Iraqi President Barham Salih and head of the Iraqi Supreme Judicial Council Faiq Zaidan. Zarif also met with PMU leaders such as Badr Organization head Hadi al-Amiri.

During his meeting in Baghdad's Green Zone, rockets were fired toward the US Embassy. There was no damage, but the attack was read as a message from Iran-backed militias to the Iraqi government to stop resisting Iran's demands in regards to expelling US forces from the country and, keeping Iraq in the axis of resistance.

The issue of outlaw militias attacking foreign diplomatic missions and even Iraqi government facilities has been a critical problem for the successive Iraqi governments, which Kadhimi hopes to solve with negotiation and dialogue.

Kadhimi’s first priority is to reduce tensions in the country and convince all parties to respect Iraq's sovereignty in order to begin his plan for economic reform and prepare for early elections. Without this advance step, no reform plan can be executed and the next elections will be a repeat of the problematic elections of 2018.

Kadhimi is trying to diversify Iraq's economic partners to include all neighboring countries in addition to global powers such as the United States.

"The government of Iraq, [the GCC] and the United States look forward to increased close economic and energy cooperation between the United States, Iraq and the GCC countries as a basis for peace, development and prosperity in the region," said the US State Department.

"The United States is committed to facilitating this project and providing support where needed," the statement added.

Iraq is also importing electricity from Iran; this agreement was renewed for two years last June.

Kadhimi looks to expand Iraq's economic relationship with many different parties in order to involve all of them in Iraq's economy and lower the flames of conflict between them within the country.

Early elections cannot be organized before the issue of out-of-control militias is solved. These militias must be integrated into the state forces and should be prohibited from interfering in the election. With the presence of military factions outside of the state with political wings, any election will be problematic, raising controversy and division among Iraqis.

In the same vein, Iran's request for ending the US military presence in Iraq depends on the Iraqi government's ability to fully control security, and to stop militias from firing rockets on foreign diplomatic missions and prevent their involvement in several illegal economic activities.

Kadhimi also launched a campaign to impose full control over Iraq's border outlets with all neighboring counties. He began July 11 at the Mandalay border outlet with Iran in Diyala province, then moved on to Basra’s land and water borders with Iran and Kuwait on July 15 — including the Shalamcheh outlet with Iran and the Safwan outlet with Kuwait. These outlets were previously under the control of militias and political parties, which enabled them to earn millions of dollars from smuggling and illegal taxing.