Egypt and Greece carried out military exercises in the Northern Fleet in the Mediterranean to counter potential threats on their maritime borders amid tensions with Turkey. 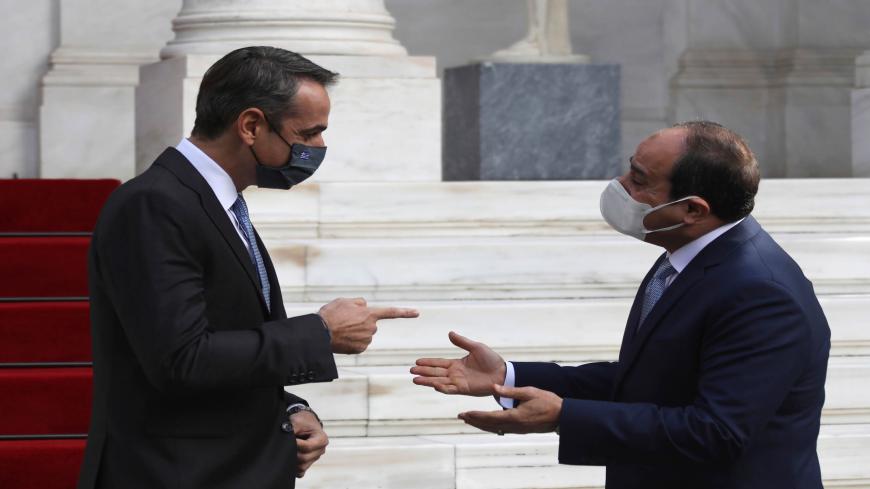 CAIRO — The Egyptian and Greek navies carried out transient maritime training in the Northern Fleet of the Mediterranean Jan. 28, with the participation of the Egyptian frigate Taba and the Greek HS Hydra F-452 warship that had stopped at the port of Alexandria, where various professional training activities were carried out.

The exercises aim to strengthen joint cooperation between the Egyptian and Greek armed forces, benefit from the bilateral potential of the two countries to achieve common interests and boost maritime security and stability in the region.

On Dec. 24, 2020, the Greek Ministry of Foreign Affairs announced that the United Nations had published the agreement to demarcate maritime borders signed in Cairo by Egypt and Greece on Aug. 6, 2020. The agreement was published by the UN Office of Legal Affairs on the website of the Division for Ocean Affairs and the Law of the Sea, according to the ministry.

Egyptian President Abdel Fattah al-Sisi had ratified in October 2020 the agreement signed between the Egyptian and Greek governments regarding the demarcation of the exclusive economic zone (EEZ) between the two countries.

The agreement provides for a partial delimitation of the maritime border between Egypt and Greece, and that such delimitation shall be completed, where appropriate, through consultations between the two parties in accordance with international law. Each party shall inform the second party should it be engaged in negotiations aimed at defining their EEZ with a third country.

On Aug. 6, 2020, Egyptian Foreign Minister Sameh Shoukry and his Greek counterpart Nikos Dendias signed an agreement to demarcate the maritime borders between the two countries. Shoukry said back then that the agreement is an opportunity for “both countries to move forward in maximizing the utilization of the resources available in the EEZ, especially promising oil and gas reserves,” in line with the rules of international law and the United Nations Convention on the Law of the Sea.

Egypt and Greece have been expanding their relations since the arrival of Sisi to the presidency in 2014, as many meetings were held between the two countries for cooperation in the fields of energy, gas exploration, counterterrorism and border demarcation.

Gamal Mazloum, former director of the Egyptian Armed Forces’ Center for Strategic Studies, told Al-Monitor that the Egyptian-Greek-Cypriot relations are strong, especially at the political, economic and military levels, and periodic meetings have taken place between the leaders of these countries.

He said that maritime borders between Egypt and Greece are being demarcated, while some countries are seeking to exploit the economic resources in the Mediterranean waters of the two countries.

Mazloum noted that the joint exercises are carried out in light of the developments in the eastern Mediterranean region and are aimed at confronting any threats the two countries might face. Egypt, he continued, is one of the countries whose armed forces’ ranking is advanced in the world and regularly conducts exercises with major, regional and Arab countries annually.

He said that Cairo conducts 40 exercises annually and has trained with Russia, France and six Arab countries, as well as carried out maneuvers with the air and special forces of Sudan. It maintains a good relationship with other countries. He added that the exercises it carries out benefit all the participating parties and teach Egypt the fighting methods and use of the equipment that these countries have.

Noha Bakr, a political science professor at the American University of Cairo, told Al-Monitor that the Greek-Egyptian military drills are based on the strong relations between Egypt and Greece, as the two countries share the same concerns and interests in the Mediterranean.

According to Bakr, the joint exercises are carried out to boost both armies’ capabilities to confront any potential risks in the region. The training, she said, took place in the Mediterranean due to concerns over Turkey’s ambitions to violate the sovereignty of Egypt and Greece in the region. They were also aimed at conveying a message whereby there are forces capable of dealing with any potential aggression, she concluded.