Burqin, a town in the northern West Bank, is home to one of the oldest churches in the world, the Church of the Ten Lepers, where Jesus Christ is said to have performed a miracle of healing lepers who were confined in the church’s cave. 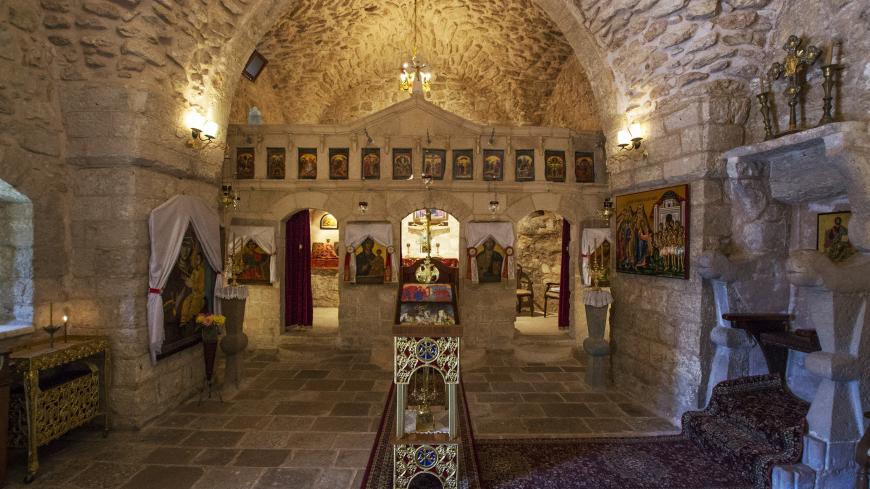 Some 5 kilometers (3 miles) west of Jenin, in the northern West Bank, lies the village of Burqin. St. George Church, locally known as the Church of the Ten Lepers, is nestled on the town’s mountainside. It is built over the cave where Jesus is said to have miraculously healed 10 lepers, giving it its name.

The Burqin church is distinguished by its patriarch’s sedilia (chair), built of stones and dating back more than 1,500 years. It is one of the only two sedilias in the world, the other is located in the Church of John the Baptist in Syria, where a crucifix sits on top of the stone structure and a picture of Christ in the center. St. George Church’s baptismal font also dates back to the Byzantine era and is some 900 years old.

Moein Jabbour, the pastor of the church, told Al-Monitor, “St. George Church is the fourth-oldest church in the world. [It was named the Church of the Ten Lepers] in reference to 10 people suffering from leprosy who were confined inside the cave beneath the church to prevent the spread of the disease.”

He said, “Jesus is said to have performed a miracle while passing through the village of Burqin on his way from Galilee to Jerusalem, and healed the sick who then went about their normal lives, as stated in the Gospel of Luke.”

The pastor explained that the “church belongs to the Greek Orthodox Patriarchate and was built in two stages. First, the small church was built during the first century over the cave where the lepers were isolated. The second church is said to have been built by Saint Helena in the fourth century. It is home to the patriarchal chair/sedilia, dating back to the year 336, which is made out of stones unlike other sedilias that are made of wood. The church also includes the baptismal font and an iconostasis, which separates worshippers from the priests during the church service.”

According to Jabbour, the total area of the church including its courtyard and garden is estimated at 1,000 square meters (0.25 acres). He noted that during the comprehensive restoration works of the church carried out in 2007 by the Higher Presidential Committee of Church Affairs in Palestine, affiliated with the Palestinian Authority, the remains of three monks and a child were discovered buried in the cave square.

“The remains date back about 500 years. Wells used as hideouts during the period of Roman rule were also discovered,” Jabbour said. “Between 2015 and 2019, tourists from around the world used to visit the church, in addition to domestic tourists, including school and university students and Palestinians from the lands along the 1948 border.”

He added, “But in 2020, tourism was hit hard and became limited only to local tourists as a result of the coronavirus outbreak and its impact on tourism around the world,” noting that the church opens its door to visitors every day of the week.

Muhammed Sabah, the mayor of Burqin, told Al-Monitor, “St. George Church holds religious and historical significance to Christians, given the miraculous healing of the 10 lepers at the hands of Jesus Christ.”

He noted that the Palestinian Ministry of Tourism officially asked UNESCO to include the church on its World Heritage List in 2018, and the issue is still being discussed.

“Burqin stretches over an area estimated at 40,000 dunams [9,900 acres] including the Araba plain all the way to the borders of the occupied Palestinian territories in 1948, and has a population of 74,000 people, including 70 Christians,” Sabah said.

He noted that in 2019, the number of foreign visitors to the church ranged from 200 to 300 tourists a month, compared to 200 local tourists.

“The town’s municipality — in partnership with several institutions — worked to develop tourism in Jenin in general and in Burqin in particular, by [converting some prominent touristic landmarks] into guesthouses, such as Khokah Palace,” he added.

Sabah explained that the “palace dates back to the Ottoman period and is seen as a tourist attraction and historical landmark and [has been restored] to receive tourists from around the world. In addition treks for tourists are organized from the center of Burqin town to the Khokah Palace and then all the way to St. George Church.”

In November 2020, the garden of Sheikh al-Sabea Shrine was also inaugurated to serve as an outlet for Burqin’s residents.

Sabah added, “The municipality of Burqin — in cooperation with the municipalities of Zababdeh and Marj Ibin Amer in Jenin, and with the support of Caritas Jerusalem — is preparing to establish a website named the Jenin Tourism Gate, which is expected to be launched in the coming months and is designed to introduce all the historical and archaeological areas in Jenin, and encourage tourists around the world to visit it.”

Moreover, the municipality is working on establishing several activities to stimulate tourism in Jenin, such as the holding of the four-day Khawabi heritage festival. The first and second editions of the festival were held in 2018 and 2019, according to Sabah.

“The festival includes a market for agricultural and heritage products, handicrafts, in addition to the organization of treks into nature. In addition, artistic teams perform traditional and folk songs and dances, including the popular dabke dance,” the mayor said.

Jeires Qumsieh, spokesman for the Palestinian Ministry of Tourism, told Al-Monitor, “The dwindling number of Christians in Burqin in particular — and the Palestinian territories in general — is mainly due to the poor economic and living conditions caused by the Israeli occupation, which has affected all Palestinians. This has in turn reduced the Christian presence in Palestine and caused Christians to emigrate to foreign countries.”

He said, “Prior to the establishment of the State of Israel, Christians in Palestine accounted for 25% of the population. Today their numbers do not exceed 1% of the total population and they continue to decrease gradually.”

St. George Church is located in Area A, which is under Palestinian administrative and police control. Commenting on whether or not this would prevent it from being subject to attacks by the Israeli army or settlers, Qumsieh said, “Israel’s attacks are indiscriminate regardless of the areas in the West Bank.”

He added, “But since the church is located in Area A, it might have some kind of protection since it is under Palestinian administrative and security control.”