Palestinian reconciliation takes another step forward with an exchange of letters. 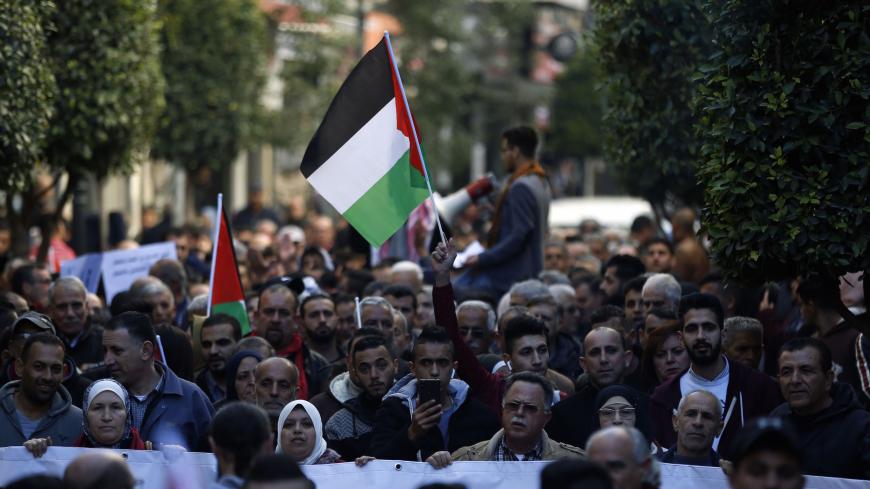 Palestinians wave national flags as they march in the streets of the occupied West Bank city of Ramallah, calling for the cessation of divisions between Fatah and Hamas and the unification of the West Bank and Gaza Strip, on Jan. 12, 2019. - ABBAS MOMANI/AFP via Getty Images

The latest round of intra-Palestinian reconciliation efforts appears to be the most serious one yet, as discussions about elections are to take place as soon as possible. Jibril Rajoub, Fatah’s secretary-general and the lead PLO official behind the latest surge of activity, delivered a letter to President Mahmoud Abbas on Jan. 2 from Hamas leader Ismail Haniyeh and then was able to return a positive written response from Abbas.

Fatah sources in Ramallah told Al-Monitor on condition of anonymity that the key issue holding up reconciliation was whether the general elections would be held simultaneously or consecutively. Abbas and the PLO had opted for local legislative elections to be followed by presidential elections. Hamas, the sources said, has finally agreed to the consecutive option. As a result, legislative elections would be followed by the setting up of a national unity government that would get a vote of confidence; presidential elections then would take place.

Annes Sweidan, the head of foreign relations in the PLO, told Al-Monitor that all parties are serious about ending the split and holding elections as soon as possible. “Before elections, however, we need to have goodwill between the parties, a stoppage of incitement and in order to move forward we need to avoid getting into small details that could derail the process.”

A statement by the Palestinian president published on the official Palestinian Wafa News agency Jan. 2 said Abbas welcomed the agreement of Hamas “regarding ending the division, building partnership, and achieving national unity through democratic elections, with full proportional representation — legislative and presidential elections, and the [Palestinian] National Council.”

Hamas has agreed to the reconciliation issues, including the holding of elections, after four countries said they would try to help guarantee the success of the elections.

Gaza-based journalist Omar Bseiso told Al-Monitor that the reconciliation and the move to elections is both a duty and a source of hope for a national democratic solution. “There is seriousness in the effort to close this despicable issue, which has put the Palestinian people’s future in jeopardy,” he said.

Bseiso said he believes the exchange of letters will put a brakes on those on both sides who are not interested in reconciliation and will allow for an agreement on a joint program under the auspices of the PLO after it is “reformed and liberated from the monopoly of one-sided decision-makers.”

Abbas invited Hanna Nassir, chairman of the Central Elections Commission, to discuss the procedures that should be followed to issue the election decrees, Wafa said.

The positive moves toward reconciliation followed a roller coaster that saw a number of positive steps, including the joint press conference between Rajoub and Hamas leader Salah al-Aruri in July, which was followed up in September by the meeting of secretary-generals of all Palestinian factions and then the talks in Cairo under Egyptian auspices. The final step, however, abruptly ended when news of the Palestinian leadership’s decision to renew security coordination with the Israeli army broke out.

Abbas thanked Egypt, which sponsors the intra-Palestinian reconciliation talks, as well as Qatar, Turkey, Russia and Jordan, for their goodwill efforts in reaching the agreement, according to Wafa news agency.

“We told them to keep us out of their internal problems and agendas. For the first time, Egypt says Fatah is not responsible for the continuation of the reconciliation. We have taken a number of steps to overcome the obstacles. Israel has been the head of the external factors that have wished for the reconciliation not to take place,” Rajoub said.

Nabil Shaath, a senior adviser to Abbas, told Arab News that Egypt has been playing a positive role in bringing the sides together. “Egypt has a national interest in Palestinian unity, which will be helpful in ensuring security.”

Hani al-Masri, a Ramallah-based analyst and head of the Masarat think tank, told Arab News that many obstacles have yet to be overcome. “This is a positive move, but many difficulties remain.”

The recent reconciliation between the Gulf countries and Turkey's decision to send its ambassador back to Tel Aviv and the role that Egypt has played appears to have had a strong influence on Hamas and allowed it to overcome its initial hesitation and agree to the PLO’s terms despite the return of security coordination.

A presidential decree announcing the date of elections is due to come out soon. More than any other issue, this could be the clearest signal that the current reconciliation effort is on track. If the decree is delayed, that will reflect a serious problem for the unity efforts as well as for the prospect of a push for Palestinian independence during the upcoming Biden administration.