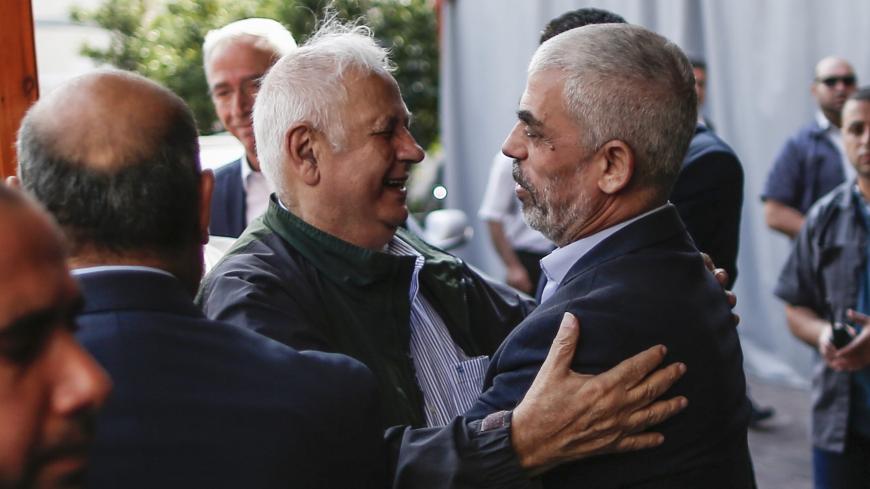 Hamas, the Islamic Resistance Movement which governs in Gaza, has agreed to reengage in a reconciliation process with Palestinian Authority (PA) President Mahmoud Abbas and move toward elections in the West Bank and Gaza.

This may all sound familiar. The parties have started down this road before, but this time it just might happen. Why? Well, for one, economic conditions in Gaza are grim, as we wrote last month, and a recent UN Conference on Trade and Development report warns that Gaza’s economy is "near collapse.” There are almost zero prospects that there will be a change for the better, absent a dramatic change in Gaza and the regional environment.

The larger issue for Hamas is its isolation, which is increased by the normalization agreement between Israel and the United Arab Emirates, Bahrain, Morocco and Sudan; US-brokered reconciliation among the Gulf Cooperation Council (GCC) states; and a new push for an Israeli-Palestinian peace conference, led by Abbas and Egypt.

With a new US administration coming in, Iran, Hamas, Syria and Hezbollah find themselves even more on the outside looking in with regard to regional trends. So Hamas is looking to play as many cards as possible, to stay relevant and engaged as events unfold.

Abbas wants to see an international conference on Palestine this year. For that to happen, he needs the momentum, legitimacy and boost that should come from long-overdue elections, and that requires the buy-in of Hamas.

Daoud Kuttab has the scoop this week that Hamas finally came around, or so it appears, after Hamas agreed to a sequence that will start with legislative elections, which would then be given a "national unity" pedigree, followed by executive elections.

Hamas previously broke off discussions with the PA when Abbas resumed security coordination with Israel after Joe Biden was elected president in November.

That intransigence eroded following recent shifts in the regional environment. Hamas had counted on support not only from its chief benefactor, Iran, but also the diplomatic good offices of Egypt, Turkey and Qatar. Normalization makes that proposition more tenuous, so Hamas agreed on elections after getting assurances from Egypt, Turkey, Qatar and Russia to oversee the election process.

"The recent reconciliation between the Gulf countries and Turkey's decision to send its ambassador back to Tel Aviv and the role that Egypt has played appears to have had a strong influence on Hamas and allowed it to overcome its initial hesitation and agree to the PLO’s terms despite the return of security coordination," writes Kuttab.

... thanks to an Egyptian diplomatic surge

No surprise that Egypt closed the deal between Hamas and the PLO. We wrote back in August 2019 that Egypt matters more than ever. We could actually write that column every year, or every few months. Witness the events of the past week.

Egyptian Foreign Minister Sameh Shoukry was party to the reconciliation agreement with Qatar at the GCC summit Jan. 5. While Egypt-Qatar relations will take time to rebuild trust, as Mohamed Sabry explains, healing the rift within the Arab fold places Egypt in an even stronger position on dealing with Israeli-Palestinian and regional issues, including Libya, Syria and Yemen.

The next day, on Jan. 6, Shoukry was on the phone with his Israeli counterpart, Gabi Ashkenazi, and Palestinian Foreign Minister Riyad al-Malki, ahead of a conference next week in Cairo about efforts to advance the Israeli-Palestinian peace process, as Rina Bassist reports.

Whether intentional or not, Egypt’s diplomacy is also a signal to the incoming Biden administration about Cairo’s role in the region. Egypt may be wary of increased pressure from Washington on human rights and press freedoms. US President Donald Trump and his Egyptian counterpart, Abdel Fattah al-Sisi, had a good working relationship, and Trump shielded Egypt, as well as the UAE and Saudi Arabia, from human rights demands and other pressures from Congress as much as possible. That could change under Biden. Egypt’s diplomatic surge is a reminder of its many links to vital US national security interests in the Middle East, as well as Africa and the eastern Mediterranean.

… as Hamas keeps options open with Assad and Iran

The normalization agreements between Israel and the UAE, Bahrain, Morocco and Sudan, as well as reconciliation within the GCC, not only have implications for the Palestinian territories but also for the so-called rejectionist front of Iran, Syria, Hezbollah and Hamas. They face pressure to close ranks.

One opportunity Hamas may exploit is a reestablishment of ties with Syria. Hamas split from Damascus after the uprisings in Syria in 2011, in solidarity with Islamist groups opposed to Syrian President Bashar al-Assad.

Hamas is now pursuing a rapprochement between Gaza and Damascus, thanks to the mediation of Iran and Hezbollah, as Ahmad Abu Amer reports.

Another sign of recent Hamas diplomacy is its collaboration on a triangular prisoner exchange with Yemen’s Houthi group, which is backed by Iran.

The Houthis have suggested that two Saudi airman captured and held since February 2020 be exchanged for 60 Palestinian prisoners, including Hamas members, held in Saudi Arabia, as Abu Amer reports.

Meanwhile, Hamas, the Islamic Jihad and other smaller "resistance" factions in Gaza conducted a joint military drill in Gaza last week both to commemorate the killing of Islamic Revolutionary Guard Corps Quds Force commander Qasem Soleiman by the United States on Jan. 3, 2020, and as a show of force in response to military exchanges with Israeli forces last week, as we report here.

… and demolishes Palestinian homes on border

Most stories on Palestinian home demolitions involve Israeli forces. Not this time. Residents of a 13-acre strip of land near Gaza’s Rafah border crossing with Israel woke up to Hamas bulldozers and demolition crews to appropriate land that Hamas claimed was public property, a claim hotly disputed by residents, as Rasha Abou Jalal reports.