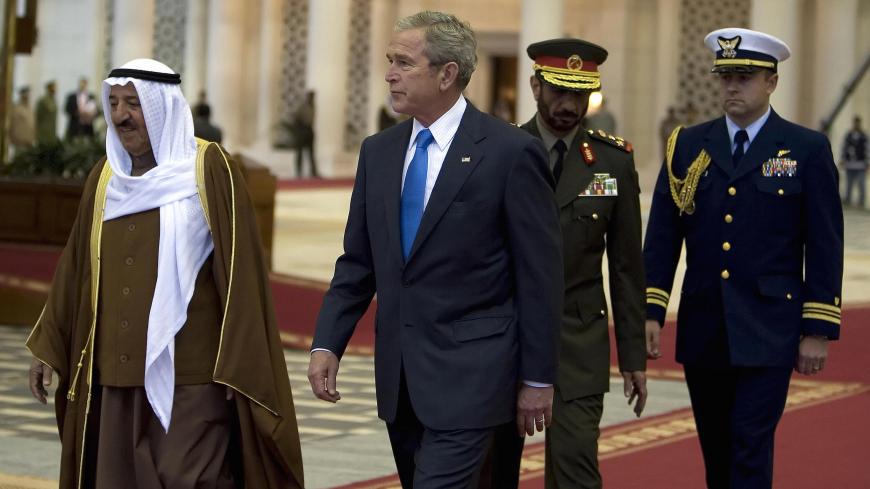 Kuwait: With passing of emir, US loses an ‘unwavering friend and partner’

A valued friend.  The emir of Kuwait, Sheikh Sabah al-Ahmad al-Sabah, passed away this week, and his loss to the region should give us pause.

There was a generosity of spirit about the emir. He was, throughout the region, a special and welcome guest and a valued friend. His regional counterparts knew there was no whiff of intrigue about the emir and Kuwait. His agenda was the avoidance of conflict, strengthening a united Gulf and Arab alliance against shared threats, and how to help the least fortunate in the region.

This assessment is not the stuff of the expected bromides when a respected statesman passes away. It is something real, routed in the legacy of the emir, who served for 40 years as foreign minister; in the moderate and progressive temperament for which Kuwaiti statecraft is known; and in a sophisticated realism about dealing with the many threats in the region through collective diplomacy. For Sheikh Sabah, the three-year rift in the GCC was an unqualified disaster for regional security, and he, more than anyone, working with the United States, tried to bring the parties together.

Building not burning bridges. In a region of often brutal fault lines and seemingly endless conflicts, Sheikh Sabah stood for building bridges, not burning them, in the interests of his country.

Let’s start with Iraq, which, under Saddam Hussein, brutally invaded and occupied Kuwait in 1990-91 despite Kuwait’s role as a lifeline for the Iraqi dictator’s war effort against Iran the previous decade. Even before Hussein’s time, it should be noted, Iraq had threatened its smaller neighbor over border issues.

The egregious aggression and human rights violations that occurred during the Iraqi occupation of Kuwait might well have fueled a hatred that would last generations. But it didn’t.

Once Hussein was deposed in 2003, Kuwait cautiously built ties to the new Iraqi government and even sponsored a donor conference in 2018.

Both Kuwait and Iraq are seeking a future that is linked to economic integration and good neighborliness, not battle lines in the sand.

And then there is the Palestinian issue. Kuwait had historically been among the most generous of donors and backers of Yasser Arafat and the Palestine Liberation Organization, but Arafat took Saddam’s side, cheered and even partook in the looting of Kuwait.

Here too, the bad blood of the past made way for the realism of the future. As with Iraq, Kuwait soon made amends with the Palestinians. Following the normalization agreements between Israel and the UAE and Bahrain, Kuwait even put out a ministerial statement that it “stands by the Palestinian people” and remains committed to a two-state solution, as described in the Arab Peace Initiative of 2002.

Honoring the legacy. In a statement of condolence, US President Donald Trump, who presented the emir with a prestigious and rare award last week, as Adam Lucente reports, said Sheikh Sabah was an “unwavering friend and partner” and “unparalleled diplomat,” adding, “I hope that the Gulf nations will come together to honor his legacy and work toward the cooperative future he envisioned.”

Our take: Ending the three-year rift between Saudi Arabia, Bahrain, Egypt and the UAE on the one hand and Qatar on the other would be a good place to start to honor that legacy (see below). That reconciliation may be closer than it has been, in good part thanks to the mediation efforts of Sheikh Sabah. Meanwhile, expect the new emir, Sheikh Nawaf al-Ahmad al-Sabah, to follow the same path as his late brother. The ruling Sabah family in Kuwait is known its for unified ranks. The transition should be a smooth one.

Stepping up:  Turkish President Recep Tayyip Erdogan has brokered a roadmap for a so-far elusive unity between the two leading Palestinian parties — Fatah, which rules in the West Bank, and Hamas, which runs Gaza — seemingly undercutting the traditional mediating role played by Egypt. While the trend toward normalization with Israel could be a means of stepping back from the Israeli-Palestinian conflict, Turkey, for its part, is stepping up to fill the void.

Unbridled ambition.  “Turkey’s ambitions in the Middle East, the increased Hamas presence in Istanbul, and the dramatic shift in Israeli-Arab ties that deprives Fatah of financial props and deepens its despair has raised Turkey’s profile,” writes Fehim Tastekin, but “Erdogan’s unbridled propensity to intervention and taking sides … precludes optimistic forecasts on whether Turkey could sustain and expand its role down the road. Moreover, Palestinian factions other than Hamas remain cautious about Turkey’s involvement.”

Our take.  Getting Fatah and Hamas to agree on any kind of roadmap is no small achievement, so give credit where it’s due. But the agreement still needs to hold, and there are other key parties — the United States, Israel, Egypt, Qatar, the UAE and Saudi Arabia (see below) — that won’t stay on the sidelines. The normalization deals have, perhaps inadvertently, moved the Israeli-Palestinian question back to the center of regional politics.

In a rare speech to the UN General Assembly, Saudi Arabia’s King Salman bin Abdel-Aziz Al Saud praised “the efforts of the current US administration to achieve peace in the Middle East by bringing the Palestinians and the Israelis to the negotiation table to reach a fair and comprehensive agreement,” but he stopped short of endorsing the US-brokered normalization deals between Israel and the UAE and Bahrain.

“For the time being and while Salman is still in power, Saudi Arabia’s traditional pro-Palestinian positions are unlikely to be compromised, even if some gestures are made to the Israelis and to the Trump administration,” writes Daoud Kuttab. “The Palestinians who have depended for years on Saudi support are not about to criticize Saudi Arabia.

Our take:  Saudi Arabia will hold back at least until after the US presidential elections in November, perhaps longer, before normalizing ties with Israel. For King Salman, as Kuttab writes, support for the Palestinians is long-standing and heart-felt, and the kingdom took the lead on the 2002 Arab peace initiative. Bahrain, which is close to Saudi Arabia, is Riyadh’s toe-in-the water on normalization. While Crown Prince Mohammad bin Salman may be more open to Israel, the king’s UN speech makes clear he is calling the shots on regional matters — Iran, Lebanon and Palestine.

Dia Saba, an Arab citizen of Israel, is the first Israeli to sign with the Emirati soccer league, Dubai’s Al-Nasr soccer club.

Saba’s historic role has been especially welcomed by Arab Israelis and Emiratis.

Hamed al-Hashemi, a poet from Abu Dhabi, told Al-Monitor, “It disturbs me to think that the gates of the Arab world were closed to Israel’s Arab citizens … the participation of an Israeli player in the Emirati league could be like the first rain, foretelling good things.

Afif Abu Much has the story here.

In case you missed it: State Department official asks if Gulf states can normalize with Israel, why not each other?

Tim Lenderking, deputy assistant secretary of state for Arabian Gulf affairs, said on Sept. 18 that “though it may not be a matter of weeks, we’re still very dedicated to resolving the crisis,” adding, “We are open to possibilities, such as where we could increase trade or transport activity, particularly across Qatar-Saudi land border. … We also think that not all parties necessarily need to be at the table at once. But we can look at small arrangements that could make progress, like between Qatar and Saudi Arabia, or between Qatar, Saudi Arabia and the Emirates, if all not together on the table,” he added.