The Palestinian president’s call for general elections appears to have gained traction in Palestine, but many obstacles remain. 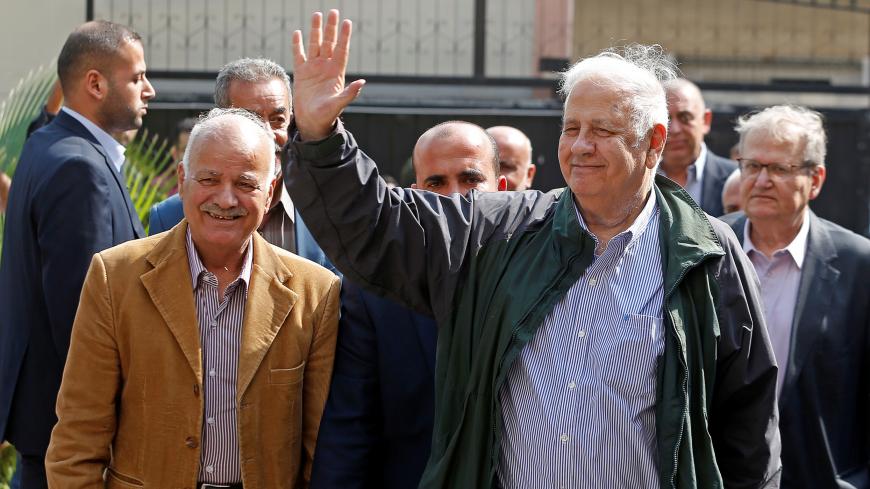 When Palestinian President Mahmoud Abbas told the UN General Assembly Sept. 29 that he “will call for general elections in the West Bank, Gaza Strip and Jerusalem" and "hold those who object to the elections accountable to God, the international community and history,” few expected that elusive election to take place. There are still many obstacles, but it appears that Abbas had some justification to make this bold call.

The traditional thinking has always been focused on the need for national reconciliation as a prerequisite to elections. But according to a senior adviser to the president, Nabil Shaath, the elections themselves will help usher in reconciliation by means of creating an elected national unity government. “The idea combines democratic and pluralistic principles. It will not be the winner takes all but a representative government based on election results. Once a unity government is established with all parties in it, we can move to the next step of presidential elections,” Shaath told Arab News Sept. 29.

Upon his return to Palestine, Abbas set up committees to help prepare for the elections and asked the head of the Central Elections Commission, Hana Naser, to go to Gaza Oct. 7 to assess the reactions of Hamas and other factions. While some criticized Abbas for seeking the help of a technocrat like Nasser, the reactions of Hamas and others were positive.

Anees Sweidan, head of foreign relations at the PLO, told Al-Monitor that Hamas expressed readiness to participate in elections, but is withholding final agreement until a decree. “Now we await a presidential decree regarding an election law with the goal to first set dates for parliamentary elections, to be followed within three months by presidential elections.”

Various pundits including Hani al-Masri, director of the Masarat think tank, expect that if all the obstacles are overcome, elections could take place next February. But while the plan makes sense in theory, Masri and others doubt that either Fatah or Hamas would be willing to give up their power, money and weapons if the other side wins. “For the plan to work, it requires a high level of political will from the top,” Masri argued in a detailed analysis of election perspectives that appear largely pessimistic about the chances of elections taking place.

In Gaza, Hamada Kamal, an activist working for the nongovernmental organization Al Fajer, which rehabilitates former prisoners in Israeli jails, said that Gazans are pessimistic about elections ever taking place. “So many people tell me we will never have elections and that the people of Gaza will never have the chance to breathe the air of true democracy and the end of this siege and split,” he told Al-Monitor. Kamal agrees with the traditional belief that national unity is needed to hold elections.

Mofid Abed Rabo, a former member of the Palestinian Legislative Council (PLC) and a former Fatah leader in the first intifada, told Al-Monitor that the key challenge continues to be whether “Hamas will abide by the results of the elections and commit to the concept of one side holding arms.”

Another key obstacle is whether Israel will allow Palestinians in Jerusalem to vote absentee in East Jerusalem post offices, as had been the case in previous elections. Khalil Assali, publisher of the centrist Jerusalem Akhbar el-Balad newspaper, is doubtful that any of the current Israeli leaders will agree. “Whether it is Benny Gantz or anyone else, there is near consensus now that the Israelis will oppose any sign that detracts from Israeli sovereignty in Jerusalem,” Assali told Al-Monitor.

The Jerusalem challenge might be the reason Abbas asked Prime Minister Mohammad Shtayyeh to visit Sweden. He is scheduled to visit next week. Shtayyeh announced in the Nov. 4 cabinet meeting that the atmosphere for elections has improved. “But elections must take place in the West Bank, including East Jerusalem,” Shtayyeh told members of his cabinet.

If in fact the many obstacles to elections are overcome, a major question will need to be answered by the Fatah leadership: Will Abbas renege on his promise not to run for president or will another candidate be chosen? There are two opposing views on this issue. Secretary of Fatah and strongman Jibril Rajoub noted on Palestine TV Nov. 4 that Abbas is 85 years old and called on the president to be a “historic leader” — hinting at an honorable retirement. On the other hand, Minister of Civil Affairs Hussein Sheikh — the head of a key ministry that interacts with Israel — tweeted Oct. 15 that Fatah's only nominee for president is Abbas.

While the potential for elections early in 2020 is looking more positive, many challenges loom and will require a strong political will as well as concerted international support for them to take place. As always, Israel can easily wreck this potential if it chooses to, but Palestinians are cautiously hopeful that elections could take place and begin the process of healing and unity.