Abbas gets new government, but has anything changed?

Hamas describes the new Fatah-dominated government as illegitimate and says it will only deepen the Palestinian division. 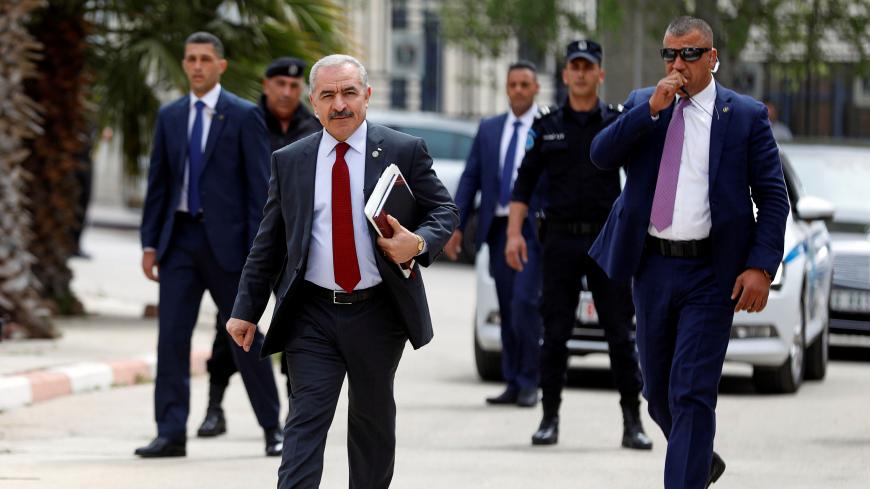 GAZA CITY, Gaza Strip — Hamas has lots of options for dealing with the new Fatah-led Palestinian government sworn in April 13, but not many choices seem likely to result in reconciliation given that Hamas wasn't even invited to join.

Still, after taking his constitutional oath, Shtayyeh reviewed his plan to achieve Palestinian national unity; prepare for legislative elections; strengthen the steadfastness of citizens on their land; defend Jerusalem; revive the national economy; promote partnership among the public, private and civil sectors; and support the families of those who fought against Israel and died or were wounded or imprisoned.

Hamas, meanwhile, issued an official statement on its website saying the new government “lacks legitimacy and is a practical step to implement [the US peace plan for the Middle East]." It added, “The fact that Fatah has formed this government is proof of its exclusivity and exclusion policy, which deepens division.”

Ibrahim Melhem, a government spokesman, told Al-Monitor, “The new Palestinian government is looking forward to enabling and exercising its functions in the Gaza Strip to alleviate the burdens on people and provide the necessary assistance."

He added, “The government has obligations toward the Gaza Strip, and helping Gaza is our top priority. We will work on doubling aid, and we hope Hamas won't place obstacles in our way.”

According to Melhem, the government is seeking to end the Palestinian division and achieve national unity. “Gaza is besieged and plagued by many internal crises, and we want the government to be strongly present and cooperate with all factions to carry out our tasks.”

Fatah and Hamas split violently in 2007 and have been estranged ever since. Despite efforts by Egypt and Arab countries, recent reconciliation talks have stalled.

Hamas spokesman in Gaza Abdel Latif al-Qanou told Al-Monitor, “The Palestinian government is neither national nor constitutional. It was formed without a national consensus between all factions. It serves the division and strengthens separation between the West Bank and Gaza as a practical step to implement the [so-called] Deal of the Century,” referring to the long-touted but still-unseen US peace plan for the Middle East, now expected to be announced in June.

He pointed out that the terms of Egypt's proposed Palestinian reconciliation include “forming a government of national unity and holding legislative and presidential elections, as well as forming a national council."

"But the fact that President [Mahmoud] Abbas is exclusively making decisions on his own shows his lack of commitment to all signed agreements and further deepens division," Qanou added.

Hamas will not abandon its duties toward the Gaza Strip and will work to solve all its crises and assume full responsibility for the territory, he said, adding, “Confronting the challenges that beset the Palestinian cause — foremost of which is the imposition of the Deal of the Century — requires forming a national unity government that would be responsible for all our people in all areas.”

Qanou noted that the new Palestinian government’s behavior will determine how Hamas deals with it.

Hussam al-Dajani, a political science professor at Gaza's Al-Ummah University, told Al-Monitor, “Hamas now faces three possible scenarios when it comes to dealing with the new government. It could [ignore] it, since [the government] has neither constitutional legitimacy nor national consensus. Hamas could turn a blind eye to any positive actions the government could take toward Gaza [yet] allow it to perform its duties to serve the public interest.”

The second scenario, he explained, would be for Hamas to reject the Palestinian government and form its own administrative committee to manage the Gaza Strip and become an official body to deal with public affairs there.

The third scenario, which Dajani considers far-fetched, would be for Hamas to accept the government and deal positively with it, allowing it to work in the Gaza Strip. In that case, Dajani stressed, Shtayyeh would strengthen his government in Gaza by working on several levels. He would maintain a communication channel with Hamas and try to lift the sanctions imposed by the Palestinian Authority (PA) on the Gaza Strip since March 2017 after reconciliation with Hamas reached a dead end, he explained.

Hani al-Masri, director general of the Palestinian Center for Policy Research and Strategic Studies - Masarat, said he also sees several potential outcomes based on Hamas' reactions. “Hamas’ response to forming this new Palestinian government paves the way for several scenarios. As a first, it could simply reject it and say it's a separatist government and [then] wait and see how it deals with Gaza.”

Second, he noted, Hamas could re-form the administrative committee it had dissolved in September 2017 and declare it the only legitimacy derived from the Palestinian Legislative Council (PLC). The Palestinian Constitutional Court, at Abbas' urging, dissolved the PLC on Dec. 22, 2018 — a decision Hamas never accepted.

In a third scenario, Hamas would call on factions and civil society to take responsibility for managing the Gaza Strip along with Hamas, Masri said. He noted another scenario would be to empower the PA in the Gaza Strip in accordance with a reconciliation agreement signed in Cairo in October 2017.

He pointed out that Hamas could form an administrative committee composed of technocrats and independents — preferably close to Hamas and accepted by the international community — as a fifth scenario.

Another option would be to agree on comprehensive solutions to end the division and restore national unity. This move would be based on mutual interests, the rules of partnership and consensus democracy, he explained, all the while rebuilding the institutions of the PLO, changing and balancing the PA’s obligations and functions, and forming a national unity government. Unfortunately, Masri believes this is unlikely to take place.