With the Iranians now resuming uranium enrichment, Jerusalem prepares itself for the Biden administration resuming nuclear talks with Tehran. 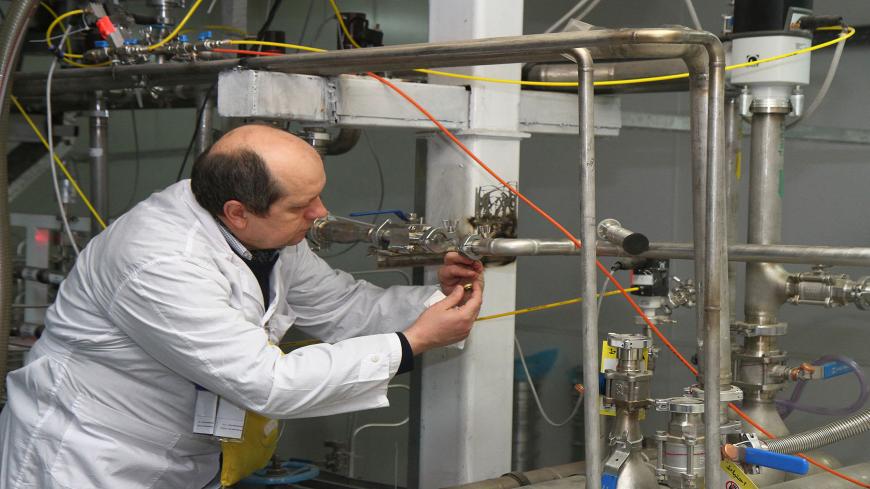 With perfect timing, worthy of a virtuoso scriptwriter, Iran announced Jan. 4 that it had resumed enrichment of bomb-grade uranium to a 20% purity level in yet another gross breach of its 2015 nuclear agreement with world powers. The move was carried out on the direct order of Iran’s Supreme Leader Ayatollah Ali Khamenei, after Iran announced its intention to do so on Jan. 1.

No one in Western intelligence, certainly not Israel, was overly surprised. “The Iranians are analyzing the timetable with great precision,” an Israeli security source told Al-Monitor on condition of anonymity. “They have probably concluded that two weeks before [US President Donald] Trump leaves office, they have acquired immunity against a surprise American attack.”

Iran’s violation of the nuclear deal is twofold, according to a senior Israeli diplomatic source. “They are both enriching uranium to a 20% level and doing so at an underground facility, which the agreement prohibits them from doing,” said the senior diplomatic source on condition of anonymity.

Could this Iranian assessment be premature? This week, Acting US Defense Secretary Christopher Miller reversed the decision to recall the aircraft carrier USS Nimitz from the Persian Gulf and ordered it to remain in place. This move, in addition to the dispatch of the US nuclear submarine Georgia to the Strait of Hormuz last month (and the deployment of an Israeli sub to the region as previously reported on this site), and the maneuvers of heavy US bombers over the Middle East in recent weeks are raising tensions to new records ahead of the Jan. 20 end of Trump’s term. The US decision regarding the Nimitz appears to have been prompted by threats issued on Twitter by Maj. Gen. Hossein Dehghan, Khamenei’s top security adviser, who warned that US moves in the Gulf could “turn the new year into a mourning for Americans.”

“Trump is a capricious president, unstable, in the twilight of his rule and capable of anything,” a former senior Israeli security official told Al-Monitor on condition of anonymity. “Still the Iranians aren’t suckers and they believe chances of an American attack are nonexistent. They probably know what they are doing. Anyone who thinks the Iranians act hastily and capriciously is wrong,” the source noted. “They proceed with great caution; they are pragmatists who seriously consider every move. The fact that so far Iran has not launched an aggressive retaliation on the anniversary of the Soleimani assassination illustrates that they are seeking a return to the nuclear agreement, not escalation,” he added, referring to the Jan. 3, 2020, American assassination of Islamic Revolutionary Guard Corps commander Gen. Qasem Soleimani.

Knesset member Ram Ben-Barak, former deputy head of the Mossad and a veteran of many Israeli operations targeting Iran’s nuclear infrastructure, told Al-Monitor that the resumption of enrichment was “the most egregious violation of the nuclear agreement to date. … This is a major event. Moving from 20% to the 90% level required to manufacture a nuclear bomb can be accomplished relatively quickly and therefore this move means Iran is significantly closer to having a bomb.”

Ben-Barak added that it would have been preferable for Iran to maintain the 3.5% enrichment level to which it adhered until now. “What they did this week certainly tests the limits. On the other hand, it is important to remember that the Americans do not honor the nuclear agreement. The question is how the world will react. Will the Europeans and the Chinese, for example, join the Americans in telling Iran, ‘No more, we will not let you violate the deal this way’? Unfortunately, that will not happen and that confronts the new US administration with a very significant dilemma. That is actually Iran’s goal. To present a significant challenge to [President-elect Joe] Biden in his first weeks in office.”

Asked whether Trump could still launch a military strike against Iran’s nuclear facilities, Ben-Barak answered, “In our crazy world, anything could happen, but I don’t think that is the case, I don’t think there is anyone out there striving for a military engagement with Iran in the Middle East. The trouble with Iran’s nuclear project is that it is spread out over many sites, some of them fortified. It’s not a nuclear reactor that you can destroy and be done with it.”

Israel is in a bind. Military and defense agencies have prepared several scenarios for the coming six months and are debating which is the most likely and which is preferable for Israel. The current assessment is that Iran is not planning a nuclear bomb breakout during the Trump-Biden transition, but is instead accumulating assets ahead of negotiations it is expected to resume with the Americans and perhaps with the other powers. “The Iranians are playing a game of brinkmanship,” a senior Israeli military official told Al-Monitor on condition of anonymity. “They have already enriched uranium to 20% purity in the past and for them, it’s not new. They will gladly give it up if the nuclear agreement is renewed and things return to the way they were. The question is not what the Iranians will do, but what President Biden will do. As far as Israel is concerned, this is nothing short of an existential question.”

Prime Minister Benjamin Netanyahu, as always, is expected to play up this situation for all it’s worth. This time, he can count on the support of Israel’s new/old allies in the Gulf, the Emirates and Bahrain, and perhaps even by Qatar, which joined the anti-Iran camp this week under an agreement with Saudi Arabia and the other Sunni axis states, mediated by Trump’s special envoy and son-in-law Jared Kushner. With Biden in mind, Netanyahu will launch a campaign arguing that the Iranians are in gross breach of the agreement, that they are quickly nearing a nuclear threshold and doing whatever they want.

The campaign will be accompanied by hints to the effect that Israel still has a feasible option of independent military action against Iran. Armed with these sticks, Netanyahu will try to sway Biden at least half way to “his side.” Israel has accepted that it cannot prevent renewed US negotiations with Iran, but wants to ensure tough preconditions. That includes keeping in place economic sanctions on Iran and plugging the many holes that made the original agreement anathema. Will Netanyahu succeed with this Democratic president where he failed with his former boss, Barack Obama? That remains to be seen in the coming months, during which we will also know whether Netanyahu is still relevant (given the scheduled March 23 elections), as well as the identity of Iran’s next president (following June 18 elections).