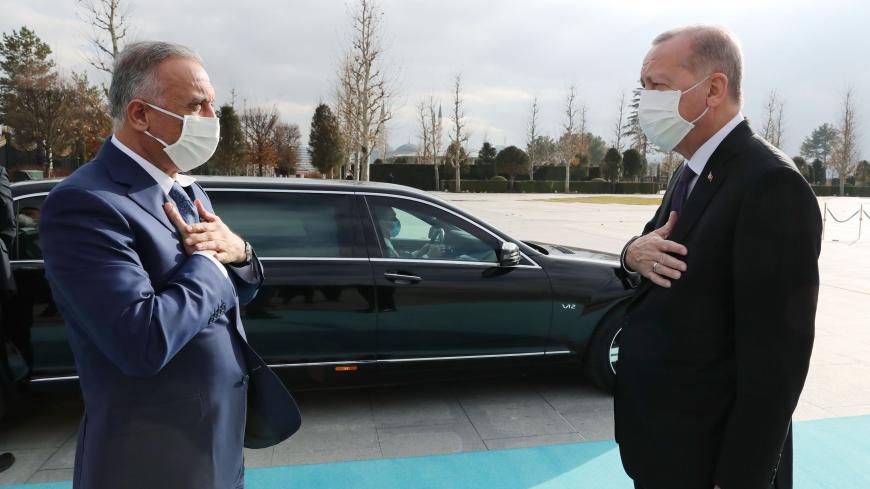 Turkey and Iraq pledged to cooperate against common terrorist threats and boost trade and energy ties Thursday during talks between Turkish President Recep Tayyip Erdogan and Iraqi Prime Minister Mustafa al-Kadhimi, on his first official visit to Turkey since taking office in May.

Speaking at a joint news conference, Erdogan said, “Regardless of their ethnicity or religion, be they Turkmens, Kurds, Arabs, Shiites or Sunnis, we see all the people of Iraq as our own brothers. There is no place for terrorism in the future of neither Turkey nor Iraq. Until terrorism is crushed there can be no peace in our region."

Kadhimi said, “Iraq’s position is very clear. There is no question of tolerating any organizations that threaten Turkey’s national security on our territory.” Both leaders were alluding to the outlawed Kurdistan Workers Party (PKK), the Kurdish militant group based in northern Iraq that has been waging an armed campaign against the Turkish state since 1984.

Turkey’s ongoing military operations against the PKK within Iraq remain a source of contention between the two neighbors. Turkish airstrikes that have killed dozens of Iraqis, most of them Kurds, are an embarrassing infringement of Iraqi sovereignty that Baghdad appears powerless to prevent. Its repeated demands for Turkish troops to pull out of Bashiqa north of Mosul have also gone unheeded.

Tensions spiked in August when Turkish drones killed two senior Iraqi commanders on the Iraqi-Turkish border. Iraq asked Turkish Defense Minister Hulusi Akar, who was scheduled to travel to Baghdad that week, to stay away.

Nechirvan Barzani, the president of the Kurdistan Region of Iraq who has close relations with Erdogan, helped smooth over the row, paving the way for Kadhimi’s visit. Expectations were not high and the leaders’ comments suggested nothing of great substance was achieved other than the signing of an agreement to avoid double taxation between the two countries.

Iraq wants Turkey to release more water from the Tigris River, which is critical for Iraqi agriculture. While Erdogan said that Turkish experts would help Iraq improve its irrigation techniques, he made no reference to a water-sharing accord that Baghdad has been seeking.

Baghdad also wants Turkey to stop facilitating the sale of Iraqi Kurdish oil to international markets and has launched an arbitration case against Ankara in Paris that it is poised to win to the tune of $24 billion.

Iraq has put the case on hold in deference to Turkish demands. While Turkey would be unlikely to fork over the cash, the damage to its credibility in international markets would be significant, hence “Iraq is doing Turkey a favor,” observed Bilal Wahab, a senior fellow at the Washington Institute for Near East Policy.

The desire to improve relations was clear on both sides and for Iraq, good relations with Turkey serve as a counterweight to Iranian influence.

Kadhimi said Iraq would welcome Turkish contractors to help rebuild Iraq’s war-shattered infrastructure. Erdogan said the flow of Iraqi crude from the Kirkuk oilfields to Turkish export terminals needed to increase and that he hoped that a “high-level strategic dialogue” would be held, “God willing, in Iraq in the near future.”

Ramzy Mardini, who studies conflict resolution at the University of Chicago’s Pearson Institute, noted in emailed comments to Al-Monitor, “Both leaders are trying to navigate through their own financial crises, exacerbated by the pandemic. Given their mutual vulnerable position, the entanglement of overlapping issues between the two countries are likely to incentivize Erdogan and Kadhimi to find areas to cooperate in hopes of easing their domestic pressures.”

Mardini added, “There is not much room for one side to independently flex its muscle in establishing leverage over the other, at least not in the current circumstances.”

In a bid to preempt further military incursions that have seen thousands of Turkish troops deploy across Iraqi Kurdistan, Baghdad recently pledged to uproot the PKK from its strategic foothold in Yazidi-dominated Sinjar. Kadhimi said, “We are keen to work together against the Islamic State and other organizations and we took a step in the Sinjar region for this.”

Turkey says Sinjar is the main conduit for PKK rebels moving men and arms to northeast Syria, where a PKK-allied and US-backed Kurdish administration is in control. It has targeted the area with airstrikes, most recently in June.

The PKK denies it has forces still deployed in Sinjar. Its fighters moved to the area in 2014 when the Islamic State unleashed its genocidal campaign against the Yazidis, and helped shepherd thousands of them to safety. A local Yazidi force known as the Sinjar Resistance Units that was trained by the PKK is meant to be integrated into Iraq’s Popular Mobilization Units and other Iraqi security structures under the terms of an agreement facilitated by the United Nations.