Ankara says it has captured a PKK militant responsible for "logistics," while also launching a new operation against the group in the Kurdistan Region of Iraq. 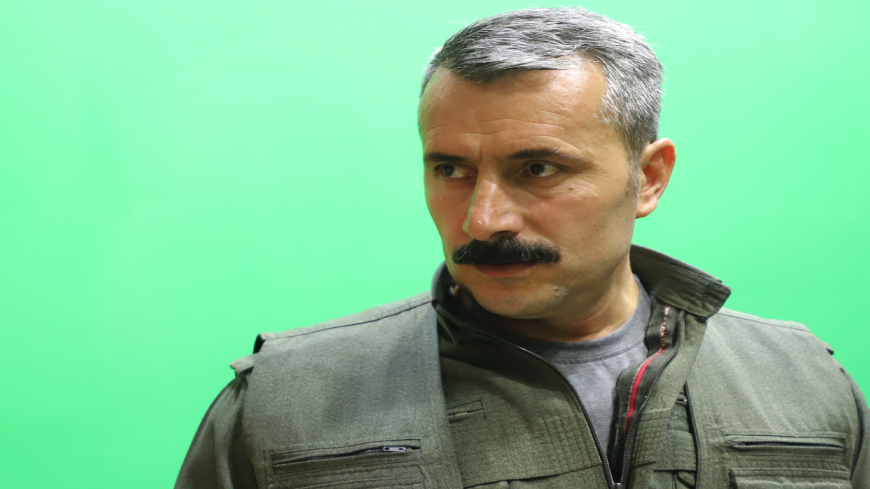 The spokesman of Turkey's outlawed Kurdistan Workers Party (PKK), Zagros Hiwa, is pictured during an interview with AFP in Qandil, the mountainous PKK stronghold in northern Iraq, on Sept. 18, 2020. In an exclusive interview in Qandil, Hiwa told AFP Turkey had created a 15 kilometer (10 miles) buffer zone in northern Iraq with the help of its drones. Turkey and Iran are increasingly adopting "game-changing" drones as their weapon of choice against Kurdish rebels in northern Iraq, prompting fears for the safety of civilians and stoking geopolitical tensions, according to Qandil's mayor. - SHWAN MOHAMMED/AFP via Getty Images

Turkey says it has netted a high-level Kurdish militant in a covert operation mounted by its national intelligence organization in Iraq’s Yazidi-dominated Sinjar region. Ibrahim Parim of the outlawed Kurdistan Workers Party (PKK), who went by the codename “Lazer,” was responsible for “logistics,” according to Turkey’s state-run Anadolu news agency.

Sitting on the border of Kurdish-governed northeast Syria, Sinjar serves as a critical link for PKK rebels moving between Iraq and Syria, according to Turkish authorities. Turkey has targeted the area on several occasions, killing what it claims were high-value PKK targets. The Turkish attacks have sowed panic among the civilian population already traumatized by the Islamic State’s genocidal campaign against the Yazidis in 2014.

On Feb. 8, Sinjar Mayor Mahma Khalil called on the Iraqi government to assert full control over the area, saying this would head off a Turkish invasion. He said Sinjar should be demilitarized. “Neither the [PKK] nor Turkey should be allowed to attack,” he said.

PKK sources say the call by Khalil, who was installed as mayor in line with a recent UN-backed security deal signed in October 2020 between Baghdad and the Kurdistan Regional Government (KRG) that is allied with Turkey, is part of a coordinated plan to oust the PKK from Sinjar.

Turkish Defense Minister Hulusi Akar traveled to Baghdad and Erbil last month to discuss joint cooperation against the PKK, and it's widely believed he was seeking approval for a joint military offensive against the PKK in Sinjar. However, it’s unlikely Iraqi Prime Minister Mustafa al-Kadhimi would greenlight further intervention by Turkey, whose decadeslong military presence in northern Iraq is a source of tension between the two neighbors.

The PKK played a critical role in rescuing thousands of Yazidis from the Islamic State in August 2014 after KRG peshmerga forces fled from Sinjar without even leaving the Yazidis weapons with which to defend themselves. As a result, the majority of Yazidis no longer trust the KRG but are divided over the role of the PKK because of the Turkish aggression the fighters’ presence attracts.

KRG Prime Minister Masrour Barzani noted today via Twitter that the Sinjar agreement “has not been implemented in accordance with the terms. Forces that were supposed to withdraw remain in the area.”

It was unclear whether he was referring to the PKK or a local Yazidi militia it helped establish and train, the Sinjar Protection Units, which also has links to Iraq’s Popular Mobilization Units operating in the area. Sinjar is among the so-called disputed territories that the KRG claims should be under Kurdish control.

In a related development, Turkey’s Ministry of Defense said in a statement today it had launched a new operation against the PKK near Gare Mountain northeast of Dahuk.

Gare is a transit point for PKK militants crossing into Turkey. The PKK’s military wing, the People's Defense Forces, confirmed in a statement that the Turkish army had launched a major operation against its forces in Gare, deploying attack helicopters and fighter jets. Saban Xelil, a local mayor, told the Kurdistan 24 news outlet that Turkish military aircraft had bombed six villages in the area since the early hours of Feb. 10 and the assault had continued until 8 p.m. local time. No casualties were reported, but vineyards and agricultural lands were severely damaged, he said.