Prime Minister Benjamin Netanyahu has succeeded in eroding the Israeli political left, but in doing so alienated his own right wing as well. 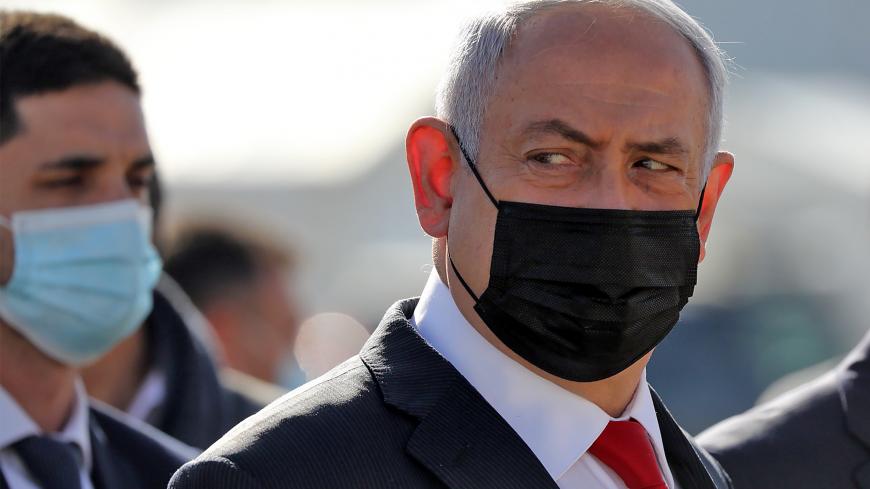 Israeli Prime Minister Benjamin Netanyahu marks the arrival of a plane of the international courier company DHL, carrying over 100,000 of doses of the first batch of Pfizer vaccines, that landed at Ben Gurion Airport near Tel Aviv, in this altered photo taken on Dec. 9, 2020. - ABIR SULTAN/AFP via Getty Images

The center left applauded former minister Gideon Saar this week when he announced that he had quit the Likud to form his own party, a reaction taken by some as further evidence that the center left is actively bringing about its own demise.

The poll results released yesterday, just one day after Saar declared his independence, told a hard truth: The Israeli right has never been stronger. Its three main parties are the Likud, Yamina and Saar’s new party, which is considered further right than Prime Minister Benjamin Netanyahu himself. There is also the Yisrael Beiteinu of Avigdor Liberman, who may have long abandoned the Netanyahu coalition but is still considered right. And of course, there are the two ultra-Orthodox parties, Yahadut HaTorah and Shas, which still maintain a close alliance with Netanyahu.

Paradoxically, though Saar and Yamina’s Naftali Bennett are at the forefront of the ideological campaign to annex West Bank territories, they are also drawing some voters from the center left as the only candidates who can bring Netanyahu down.

According to the Channel 13 poll, a vote now would give the right 80 seats, at least on paper. A Channel 12 poll produced similar results. It is a historic low for the center left, which held an advantage just two weeks ago. If elections do take place in the next few months and Netanyahu is defeated, he will likely be replaced by someone from the right.

The center left has for years been fighting a single-minded battle to topple Netanyahu. But the more the struggle against Netanyahu escalates, the further the center left wears itself down and loses political relevance. Right now, it looks like the center-left camp has given up. The route to the prime minister’s office clearly passes through the right.

The person responsible is Netanyahu. It all began two decades ago in 2000, when Ehud Barak, Israel’s last prime minister from the left, returned from the Camp David summit visibly disappointed with PLO leader Yasser Arafat. When Barak made his historic announcement that there is “no partner for peace,” Netanyahu was there to ride the wave of public animosity toward the peace process.

In a conversation with Al-Monitor, strategist Israel Bachar, who worked with Netanyahu at the time, said Barak’s statement marked a breaking point with harmful ramifications for the left: “When we conducted our research, we found that not everyone blamed the Israelis. Many people blamed the Palestinians for what happened.”

Netanyahu got to work supposedly as a concerned citizen. He had been out of politics ever since his ignominious defeat to Barak in 1999. Then, the second intifada broke out right after the failed Camp David summit. There were over 1,000 Israeli casualties and many thousands more wounded in a series of suicide bombings in Israel’s major cities. The violence only validated the arguments of the Israeli right. Bachar contended, “What Netanyahu did next was adding content to the ideological right. He focused on the connection to Judaism and nationalism as a counterpoint to universalist values. Then, in the last two years, he added the fight against the legal system to the mix.”

Bennett and Saar are the consequence of how Netanyahu shaped the Israeli right over the past two decades.

There is no doubt that Netanyahu made the right into a powerful, winning brand with sweeping appeal. Traditionally, the ultra-Orthodox parties belonged to neither the right nor the left, but they became Netanyahu's staunchest allies. Netanyahu was able to link the fate of the right to his own, so successfully that over the last few years, the right regards criminal investigations into his affairs as part of the left's efforts to bring down the right-wing government. The charges against him are a hoax, or to use a more contemporary term, “fake news.”

The sense that Netanyahu is a predator who brutally eliminates his opponents on both the left and the right has been building for years. Liberman was the first to challenge him by refusing to join his government. Then, a year ago, Saar ran against him in the Likud primary, only to suffer a crushing defeat.

With the pandemic and Netanyahu’s trial in the background, and “Anyone but Bibi” trending across the country, Bennett and Saar have been able to break out as independent candidates, the next generation of leaders on the right. The right has split, and Netanyahu is now seen as both a blessing and a curse of his own making.

There is no real ideological battle between Netanyahu and his right-wing competitors, who are offering the same thing as the center left: “Anyone but Bibi.”

Netanyahu's character flaws and obsession with fighting his opponents have turned former confidantes like Liberman, Saar and Bennett into his archenemies. His boundless tension and suspicion have caused him to lash out at any perceived rivals and left him vulnerable to being brought down by the right rather than the left.

Will Netanyahu be able to maintain his position as leader of the right or see his main task — the reshaping of Israeli public opinion so that it supports the right — be handed off to others?

Netanyahu should be worried, but he is still stronger than Bennett, Saar and Liberman. He has a significant edge in polls asking who is best suited to serve as prime minister. By the end of December, we will know if there will be a new election, or if Netanyahu will avoid it by reaching a compromise with Benny Gantz and the Blue and White Party.

Netanyahu is already in the midst of a new campaign, presenting himself as the responsible adult, a statesman par excellence and the leader with the most solid base even as parties opposed to his rule emerge on the right. It is hard to imagine any other politician maintaining his level of popularity while dealing with criminal proceedings at the height of a medical and economic crisis.