Israelis not ready to topple Netanyahu over corruption

Corruption and scandal may not be enough for voters to remove Prime Minister Benjamin Netanyahu from office. 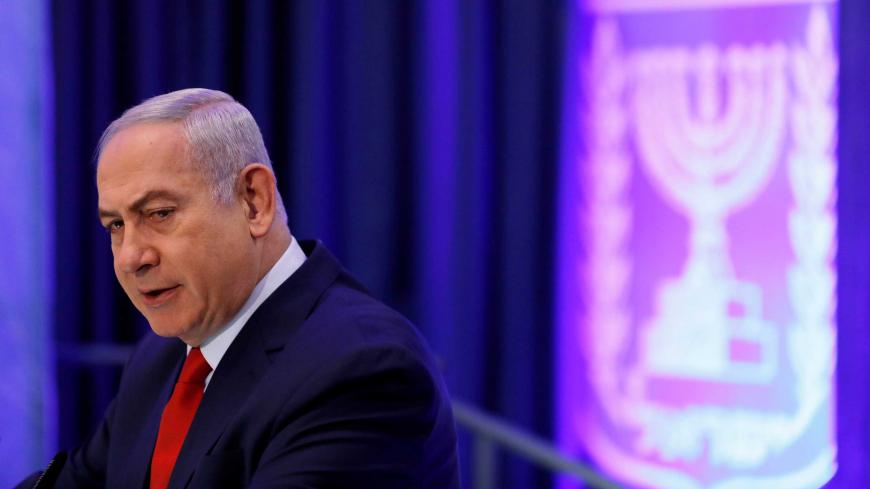 Just before the 2009 election, the Labor Party candidate for prime minister, Ehud Barak, considered focusing his campaign on the fight against government corruption. These were the final days of the Kadima government led by Ehud Olmert. Olmert would soon be forced to resign because of the criminal investigations into his affairs.

Barak himself led the successful political maneuvering that resulted in Olmert's resignation. It was why he believed that he had a winning campaign. The problem was that in-depth polling showed that government corruption was not a priority for Israeli voters. The truth is that Barak didn't need any polls to reach this conclusion. In 2003, the country voted overwhelmingly for the Likud headed by Ariel Sharon (38 seats), despite the serious criminal cases associated with him, such as the Greek island affair and the Cyril Kern loan. Regardless, people believed that Sharon was the person best suited to steer the country through the security challenges posed by the second intifada (2000-2005). Criminal scandals were not enough to prevent his election.

Now, with 2018 right around the corner, it looks like government corruption, which has popped up everywhere, is the ace that will win the next election. A partial list of the ongoing scandals would include the criminal investigations against the prime minister, but also against other senior Likud members, including Coalition Chairman David Bitan and Welfare Minister Haim Katz. Then there is the criminal investigation into Interior Minister Aryeh Deri of Shas, and reports of the allegedly corrupt political network created by Israel's ambassador to the United Nations, Danny Danon, at the taxpayer's expense.

The protests against Netanyahu's corruption have gathered momentum in the last two weeks, ever since they were moved from the sleepy town of Petah Tikva to the heart of Tel Aviv. They are creating the sense that the country is just moments away from the collapse of a corrupt government. The fact that tens of thousands of people have joined these demonstrations testifies to a high level of public involvement. Nevertheless, they draw mainly from the center-left, or what is called, the "anti-Netanyahu" camp. Netanyahu claims that these are actually demonstrations by the left, which wants to bring down his right-wing coalition, and not through the ballot box either. While this is a populist claim, for Netanyahu's voters at least, it is in no way disconnected from reality.

Netanyahu is still seen as the responsible adult in the room, especially after President Donald Trump's declaration concerning Jerusalem.

As of now, the protests against corruption have failed to break through the barrier of political allegiance, at least not according to the polls. They still say that Netanyahu and the Likud will be able to put together the next government. When pollsters ask about Netanyahu's suitability to serve as prime minister, compared with center-left leaders Yair Lapid of Yesh Atid and Avi Gabbay of the Zionist Camp, the results are unequivocal. Despite the criminal investigation and the allegations that he received bribes, Netanyahu has an enormous advantage over both of them. The reasons for this are his considerable political and diplomatic experience, and the relative trust he enjoys for his handling of foreign affairs and security issues. In other words, Netanyahu is still seen as the responsible adult in the room, especially after President Donald Trump's declaration concerning Jerusalem.

Obviously, Gabbay and Lapid, as well as Meretz Chair Zehava Gal-On, are doing what they should as opposition leaders. They are putting up a mirror before the public in an attempt to tell the story of record-breaking government corruption, including attempts to pass laws that would weaken the country's gatekeepers, including the Recommendations Law (preventing police from recommending indictment), and a law to limit the power of the state comptroller.

In the last week, Gabbay, Lapid and Gal-On have shifted gears in their war against corruption. On Dec. 13, for example, Gabbay launched his "State without Corruption" campaign in the Knesset. It is the Zionist Camp's plan to eliminate corruption from politics.

Gabbay's campaign was reminiscent of Lapid's "Nachshon Plan," launched in April to fight public corruption and bolster law enforcement. The Nachshon plan was developed by former police commander Yoav Segalovich (ret.), who led the investigation of Avigdor Liberman when Liberman was foreign minister. Segalovich joined Yesh Atid a year and a half ago and became a prominent symbol of its fight against corruption. To Lapid's credit, it should be pointed out that corruption has long been a core issue for him. Nevertheless, when Gabbay was elected head of the Labor Party in July, Lapid's poll numbers plummeted. In other words, the people would not reward him for his war against corruption. Instead, he was abandoned for the one man who looked like he could bring down Netanyahu, at least at the time.

Lapid has since managed to recover, but not because of his campaign against corruption. Rather, he has Gabbay to thank. The Labor Party leader's mistakes and misstatements caused him considerable harm with his voter base.

Another demonstration against corruption is scheduled for Dec. 16 in Tel Aviv. Judging only on the basis of the previous demonstrations, it should be huge, with the Hanukkah holiday contributing to that as well.

The recent demonstrations are trying to recreate the mood of the "Crooked Politicians: We're Sick of You!" campaign, which led to the fall of the Likud government in 1992 and the election of Yitzhak Rabin. While this is the narrative remembered by the public, it misses the point of what really happened. The government was replaced because Rabin, the candidate of the left, was an experienced security hawk, who offered a diplomatic alternative to (Likud) Yitzhak Shamir's refusal to negotiate with the Palestinians.

At the time, voters, including those on the soft right, trusted Rabin's ability to deal with security matters, but it also connected with him emotionally. The "Crooked Politicians: We're Sick of You!" campaign may have contributed to the mood across the country and the desire for political change, but people also thought that Rabin really was the candidate best suited for the job. Without that, there would never have been a government turnover.

Netanyahu and other senior Likud officials, such as the Internal Security Minister Gilad Erdan and former Minister Gideon Saar, have been attacking Gabbay for the last few days over his assertion that the Likud is a corrupt party. Netanyahu, Erdan and Saar know their voters well. Erdan called Gabbay "the head of the movement that invented political corruption: the old Mapai party." He went on to remind everyone that the police interrogated Gabbay under warning as well, and that when he served as general manager of Bezek, he was held under house arrest while the police investigated criminal wrongdoing in the company.

The fight over corruption has yet to break through the barriers of political allegiances, too. Within the Likud and the right, the problem is considered marginal, compared to the possibility of it bringing down the right-wing government. As long as Gabbay and Lapid fail to break past Netanyahu in polls measuring public conceptions of their suitability to serve as prime minister, simply focusing their campaign on government corruption will not be enough.