Israel's opposition needs to take a page from Ehud Barak in how to turn the screws on Prime Minister Benjamin Netanyahu given his glaring vulnerabilities. 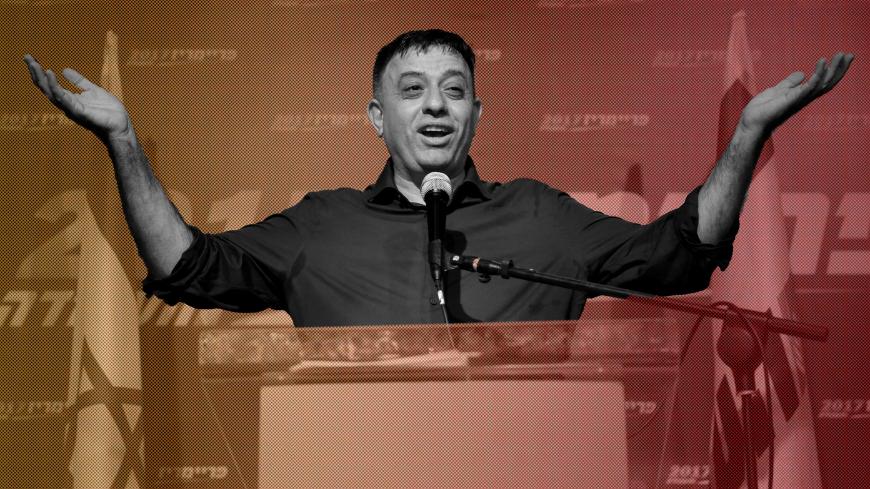 Avi Gabbay, the leader of Israel's center-left Labor Party, gestures as he delivers his victory speech after winning the Labor Party primary runoff, at an event in Tel Aviv, Israel, July 10, 2017. - REUTERS/Amir Cohen

Over the past several months, only one politician has managed to goad Prime Minister Benjamin Netanyahu into attacking him, and that was former Prime Minister Ehud Barak. In a video that Netanyahu posted on his Facebook page Sept. 4, he can be heard mocking and even imitating Barak. On another occasion, he called him, “an old-fashioned man with a new-fashioned beard.”

For some time now, Barak has exploited various social networks to become an effective, if brutal, one-man response team to Netanyahu. Barak regularly refers to him with a vast and creative array of insults, for instance, calling him a “feeble lackey of a prime minister” and deeming him “paranoid.”

Netanyahu's life would be absolutely miserable if Barak were head of the opposition. Barak, however, has no formal political position. The public abandoned him long ago, and he does not pose a political threat to Netanyahu. What is evident, however, is that Barak is demonstrating how the opposition should be reacting to a prime minister drowning in criminal investigations.

The clearest sign that Israel is experiencing the worst opposition ever is that Netanyahu can afford to ignore the very people who are supposed to be his political rivals. None of Netanyahu's dozens of Facebook posts, tweets or speeches in the past few months has referred to his rivals, among them Avi Gabbay, the new Labor Party chair and hope of the left, and Yesh Atid Chairman Yair Lapid. They may be the most prominent leaders of the opposition, but they simply don't exist as far as Netanyahu is concerned.

In a speech delivered during a formal Likud-sponsored Jewish New Year toast on Aug. 30, Netanyahu focused his attacks on the former caretaker of the prime minister's residence, Meni Naftali, who has become a leading figure in the public protests against him. Netanyahu spent several minutes railing against Naftali, as if he were the head of the opposition in the Knesset.

From every possible perspective, these days should be the opposition's moment of glory. The prime minister is entangled in a series of criminal investigations that have the people closest to him going in and out of police interrogation rooms through a revolving door. Meanwhile, the diplomatic process is gridlocked, and there is no initiative on the table to resolve the volatile situation in Gaza. A viable opposition would turn all this into a lethal public weapon against Netanyahu. It would convert the prevailing malaise into the kind of energy that leads to a change in government. Netanyahu should be breaking out in a sweat, and not because of the threat posed by the various criminal investigations against him.

Paradoxically, Netanyahu is actually quite powerful and growing stronger within the Likud and his coalition. He sits atop the polls, and there is no visible alternative to his leadership in the form of a political rival or a proposal to counter the diplomatic stalemate he has offered up for the past decade.

For the moment, Barak is the only person crafting an ideological alternative to Netanyahu and the Likud, through a combination of rhetorical skill and natural leadership ability. In the current arena, both Gabbay and Lapid are lightweights. They may compose the right Facebook posts, critique Netanyahu's performance, express their reservations about corruption in government and promise a better world, but when it comes to pumping energy into the opposition, they are clueless. There are several reasons for this.

Gabbay and Lapid are both competing for the same basic pool of center-left voters, and they both see themselves running against Netanyahu for the premiership. In a three-way race, Netanyahu benefits. In the 2000s, there has been a centrist party in almost every election taking a deep bite out of Labor. There has, therefore, been no single leader of the center-left.

Now, both Lapid and Gabbay want to attract Likud voters to break the stalemate between their two rival blocks. Lapid is actively distancing himself from the left, while Gabbay is using his coming from a Mizrahi family of Likud supporters to lure voters on the right. In practical terms, however, the result is that both leaders are making every effort to avoid alienating Likud supporters. Thus, in dealing with Netanyahu, they tend to stick to a mainstream line, which is hardly aggressive enough.

Their underlying assumption is that Likud supporters do not like it when their party and their leader come under attack, but this is the wrong way to look at the situation. The role of an opposition party is to attack the ruling party, its representatives and its leader as hard as it can, every day, all the time. With political consultants associated with the Likud being arrested by the police, an opposition campaign need not focus exclusively on Netanyahu's corruption. It should focus on corruption within the Likud as a whole. The Labor Party's 1992 campaign — led by Yitzhak Rabin under the banner “We're sick of your corruption” — succeeded because it presented the entire Likud as corrupt. It showed no mercy on Likud members.

Now more than ever, the role of the opposition is to provide the people with a sense that there is an alternative to the sitting government. It should focus on the idea that there is another candidate for prime minister with a well-formulated diplomatic and economic vision. That candidate should not be someone who chooses his words carefully because he wants to trap random Likud voters in his net. For example, at a Calcalist Conference on Sept. 4, Gabbay declared, “My vision for the Labor is a party that is home to all Israelis: religious and secular, Arabs and Jews, men and women, Mizrahim and Ashkenazim, and people who are a little to the right and a little to the left.” That is not how an alternative to the current right-wing government should sound.

The opposition is split between two main parties busy competing against each other, while Netanyahu practically dominates the agenda. It is hard to recall the last time Gabbay or Lapid made big headlines, sparked a discussion or forced Netanyahu to respond. Gabbay came close, if only for a moment, when he surprised everybody in July by winning the Labor's leadership election and a few days later when he joined demonstrators outside the home of State Attorney General Avichai Mandelblit. He brought with him the energy needed to replace the current government, but he chose the wrong demonstration. It was inappropriate for him to join demonstrators who claimed that the attorney general was protecting the prime minister. Furthermore, an effective opposition would have initiated its own demonstrations and street protests, rather than hitching a ride on one organized by Naftali.

The division on the center-left will become increasingly acute as the next election approaches. Gabbay and Lapid will be forced to fight for the same voters, while simultaneously waging a campaign against Netanyahu or whoever replaces him. Under these circumstances, the Likud could win the election even without Netanyahu if no clear alternative to it is in the running.