Prime Minister Benjamin Netanyahu continues to lead in polls despite the "Bottlegate" scandal surrounding his wife, suggesting that fighting corruption holds little importance in the eyes of the Israeli voter. 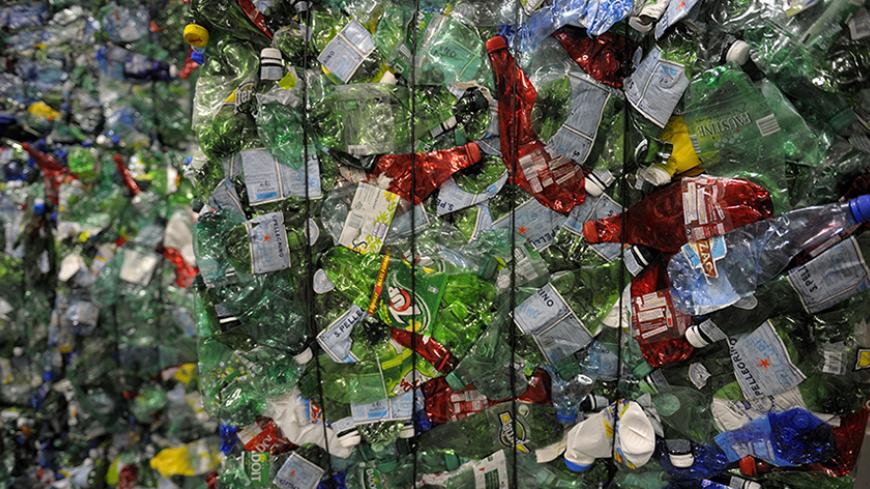 Crushed plastic bottles are seen at a recycling center, May 4, 2011. - REUTERS/Philippe Wojazer

Ahead of the 2009 elections, the Labor Party, one of Israel's largest, explored focusing its campaign on the war against governmental corruption. Theoretically, it was a logical choice, as the elections had been moved up in response to the corruption affair surrounding Prime Minister Ehud Olmert. Also, Finance Minister Avraham Hirschson was being tried on charges of stealing millions of shekels, and an atmosphere of disgust pervaded the country. The head of that same party also recalled the 1992 success of the Labor Party's campaign under late Prime Minister Yitzhak Rabin, using the catchy slogan roughly translated as, "Corrupt people, we're fed up with you!” All this contributed to the toppling of the Likud government.

But when the anti-corruption campaign's effectiveness was tested in opinion polls, public interest in it was found to be minor. At the top of the Israeli priority list is economic issues, followed by security; corruption appears closer to the bottom, together with the environment. As a result, the corruption issue was shelved.

Six years later, on the eve of the 2015 elections, government corruption dominates the headlines, even breaking records. First came Olmert's allegedly criminal behavior as revealed, in recent months, in the tapes of his former longtime aide Shula Zaken. Then came the bribery suspicions in the burgeoning Yisrael Beitenu corruption scandal, including former Tourism Minister Stas Misezhnikov and Deputy Interior Minister Faina Kirshenbaum. Even more recently, we are witnessing the so-called Bottlegate affair in the prime minister's house. According to reports, the prime minister's wife allegedly pocketed the cash received for recycled bottles from the prime minister's residence. She returned some of the money to the state, but only after several years had passed.

The affair immediately became sizzling hot in the hands of the Likud's rival parties, and they have helped to keep the issue at the top of the public agenda over the last few days. They called on the attorney general to launch a criminal investigation against Prime Minister Benjamin Netanyahu and his wife. Meanwhile, Tzipi Livni, No. 2 in the Zionist Camp party, succeeded in dominating headlines Jan. 31, when she said, "Netanyahu spends more on alcohol than some Israelis earn per month." Thus, Livni linked the corruption allegations against the prime minister and the high cost of living, an issue that disturbs many Israelis.

Despite the verbal attacks and suspicions regarding what goes on in the prime minister's home, polls conducted after the Bottlegate affair actually showed a rise in the strength of the Likud Party headed by Netanyahu. In a poll conducted by Haaretz, the Likud gained three mandates, making it the largest party, with 25. In contrast, the Zionist Camp that led the attack against the Likud remained with 23 mandates. The survey also pointed to a rise in indexes assessing Netanyahu's suitability for the premiership and a widening of the gap between him and Labor and Zionist Camp Chairman Isaac Herzog. Another survey published the same day by the Mako news site also pointed to a strengthening of the Likud and showed that 48% of the public did not believe that a criminal investigation was appropriate in the Bottlegate affair. In other words, the Israeli public is much more affected by last week's security escalation in the north than about the Bottlegate storm and new allegations against Netanyahu. According to these findings, corruption will not affect the current election campaign either.

Therefore, it will be interesting to follow the campaign led by Yesh Atid Chairman Yair Lapid under an anti-corruption banner. Lapid's choice of the corruption theme was to a large extent due to a lack of other options. His tenure as finance minister was largely viewed as a failure, so Lapid urgently needed to deflect attention from his part in the outgoing government. The campaign's message must also suit Yesh Atid's image as a centrist party that prefers not to focus on the diplomatic issue (so as not to be viewed as too leftist).

Before his current program, Lapid had never exhibited much zeal in fighting corruption. Lapid is viewed as being very close to Olmert, the best friend of his father, Yosef "Tommy" Lapid, leaving him torn between his desire to support Olmert and his duty as a public figure to condemn the actions Olmert is accused of.

In these circumstances, the corruption theme became Lapid's safe haven. As a talented campaigner, he was able to arouse public interest in the issue, distance himself from his failures as finance minister and register a comeback in the polls. Within a few weeks, Lapid formulated an aggressive legislative program to uproot the evil of governmental corruption. On Feb. 2, Lapid stationed himself opposite the entrance to Maasiyahu Prison and presented his platform to the public, gaining a tailwind from the Bottlegate affair. He attacked Netanyahu in his speech opposite the prison gates, saying, "We live in a reality where the gatekeepers are silent when the prime minister hides behind his wife and turns the prime minister’s residence into a detached, imperial palace."

Lapid was one of the key speakers at a convention held the following day by the Israel Democracy Institute (IDI) on the war against corruption. Lapid warned, "We must halt the corruption epidemic since it causes the Israeli public to be ashamed. We need a new contract with the public. That is our stipulation for joining any government." It is a very long time since Israel had such a talented and committed presenter for the war against corruption.

In his previous election campaign, Lapid was able to put his finger on the public's most sensitive spot: the high cost of living. The question is whether his current issue of corruption will actually cause a change in voting patterns. That would be a dramatic change, since in the 2006 elections the Israeli public shrugged its collective shoulders at corruption allegations against late Prime Minister Ariel Sharon and voted him into the premiership with a large majority.

Tamar Hermann of the IDI told Al-Monitor that the corruption issue is not expected to have much impact today. "The public does not accord special importance to this issue. They cannot take any more of this issue," he said. "We are reaching the level where corruption is so predictable that it doesn't make a dent on the voters, whose premise is that everyone is corrupt and that's just a decree of fate. So at least they should be competent. It's similar to the situation in South America, where government corruption is an integral part of the system. They say, 'He's corrupt, so he should at least be competent.' We are nearing that point."