Over the years, the Likud Party has preferred to grant vast funds to settlements, instead of caring for the weak and poor sectors, which got it to power in the first place. 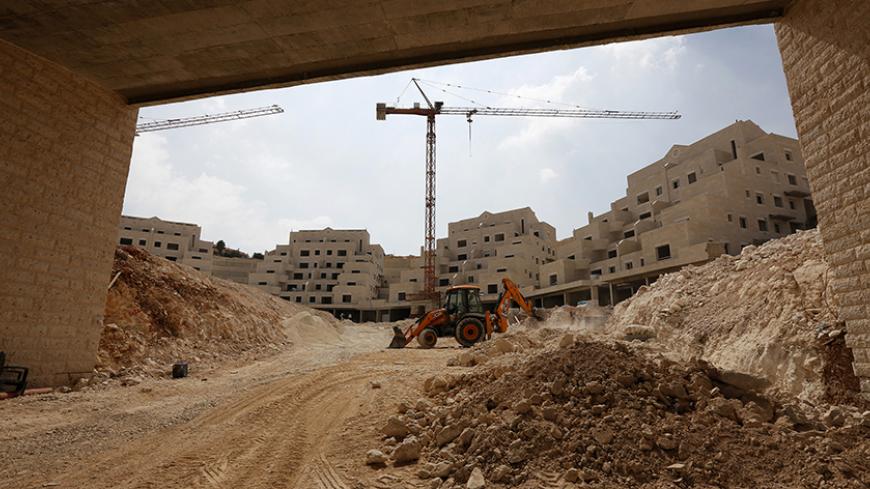 A backhoe loader works at a construction site in Pisgat Zeev, an urban settlement in a Jerusalem area annexed by Israel after the 1967 Six-Day War, Aug. 13, 2013. - REUTERS/Baz Ratner

The poll that aired on Jan. 24 on Israeli TV Channel 10, as well as internal polls presented to the heads of Israel’s parties, indicate that even if Prime Minister Benjamin Netanyahu kills Hezbollah Secretary-General Hassan Nasrallah with his bare hands and is awarded the Nobel Peace Prize, the Likud Party is far from being the certain winner of the coming elections. The Israeli voter is less preoccupied by security issues, the diplomatic situation or the question of governability than by his/her negative bank balance. In the survey conducted by professor Camil Fuchs for Channel 10, more than half of the respondents (53%) marked “cost of living and welfare” at the top of the agenda that will guide their choice at the ballot box on March 17.

In January 2013, Yair Lapid’s Yesh Atid Party hit the jackpot of Knesset seats with its understanding that “it’s the economy, stupid.” The slogan of Lapid’s previous election campaign, “Where’s the money?” has remained as relevant as it was then, perhaps more so, even after the short term he served the Israeli people from the Ministry of Finance. This question is also of interest to police officers of the Lahav 433 unit charged with investigating corruption, who are investigating suspected corruption in the Settlement Division of the Zionist Federation and in the Samaria local council in the West Bank. The police claim they have prima facie evidence of alleged fraudulent money transfers to the council’s coffers. This, of course, was carried out at the general public's expense, including the millions of taxpayers who are far more troubled by their bank balances than by the demographic balance between Jews and Arabs in Israel and the nuclear balance in the Middle East.

Reflecting the heavy suspicions that a significant part of the money found its way to the pockets of elected officials, such as the head of the Samaria Council, Gershon Messika, and the arrests of senior members of the Yisrael Beitenu Party, coverage of the affair is being handled mainly by police-beat reporters. Journalists who cover settlement affairs have for years been reporting about the wholesale injustice in the allocation of money on the two sides of the Green Line. In the short time she has been serving in the Knesset, young lawmaker Stav Shaffir (Labor) has accomplished what party veterans have refrained from doing for decades: the heroine of the 2011 social justice protest put front and center the issue of the link between the situation of the settlement enterprise and the situation of the typical, hard-pressed Israeli.

Fewer than 5% of Israel’s residents live in settlements, but get four times more funding than their share of the population: in construction, in tax and fees exemptions, in extra budgets for education, in public transportation and grants from the Ministry of Interior. Shaffir contends that they get at least an additional billion shekels ($250 million) annually from the state through a hidden slush fund, while the local councils and businesses in southern Israel have not even received full compensation for the war in Gaza. Shaffir’s publicized battle against the chairman of the Knesset Finance Committee and patron saint of the settlers, Nissan Slomiansky of the HaBayit HaYehudi Party, made front-page headlines revealing that the budget of the Settlement Division in the Zionist Federation (75% of which is funneled to the settlements) grew by almost 600% in 2014. The division is shielded from scrutiny despite that the state provides all of its budget.

It's therefore clear why Netanyahu and HaBayit HaYehudi Chairman Nafatli Bennett are doing all they can to divert the public’s attention from economic issues to the diplomacy-defense arena. But why aren’t the Zionist Camp leaders Isaac Herzog and Tzipi Livni hitting the right wing hard with the ball of the settlement funds that Shaffir has served them with great talent?

Late Prime Minister Yitzhak Rabin was the first and last Labor Party leader to draw a straight, thick line between the settlement enterprise, which supplies the needs of a small minority, and the welfare of most of the Israeli public — Jews and Arabs alike. His commitment to stop allocating massive funds to what he termed “political settlements” (known today as “isolated settlements”) was at the center of Labor’s 1992 Knesset election campaign. And indeed, the Rabin government diverted a significant portion of the settlement budgets to the development of Jewish and Arab communities in the Negev and the Galilee. Rabin’s heirs at the post of Labor Party chair — Shimon Peres, Ehud Barak, Binyamin Ben Eliezer and Amir Peretz — joined governments that funneled millions to the settlements at the height of the peace process, be it real or imagined.

Not only that, the issue of settlement funding is categorized as a battle of the “peace” ward; considered over the past few years by the Israeli mainstream as a closed-off ward in a psychiatric hospital. The right argues that the establishment of settlements beyond the Green Line is a Zionist mission of the first order and a barrier against the establishment of a Palestinian state. The left points to the damage caused by the settlement enterprise to Israel’s international standing and its security. It warns that the blurring of the Green Line will result in turning Israel into a binational state and hasten the end of the Zionist enterprise.

The Likud Party has turned its back on the weaker sectors of society and on the residents of the periphery; those who brought it to power in 1977. Late Prime Minister Menachem Begin advanced during his mandate a comprehensive plan to rehabilitate impoverished neighborhoods, and was careful to respect the law on both sides of the Green Line. Shamefully, the more its hold on rule got stronger, the more the Likud Party treated its traditional electorate rudely and dismissively.

Currently, politicians are hiding their narrow interests behind a cloak of devotion to “the land of Israel.” Thus, they are courting the masses of settlers who joined the party and took over its institutions. Still, perhaps this time around the weaker social sectors, those who handed Likud the government, will also be the ones to bring it down.