Secrets of the Israeli treasury

In an interview with Al-Monitor, Knesset member Stav Shaffir of the Labor Party reveals the treasury’s concealed budget transfers to the settlements, but her Google generation isn’t fooled by lack of government transparency. 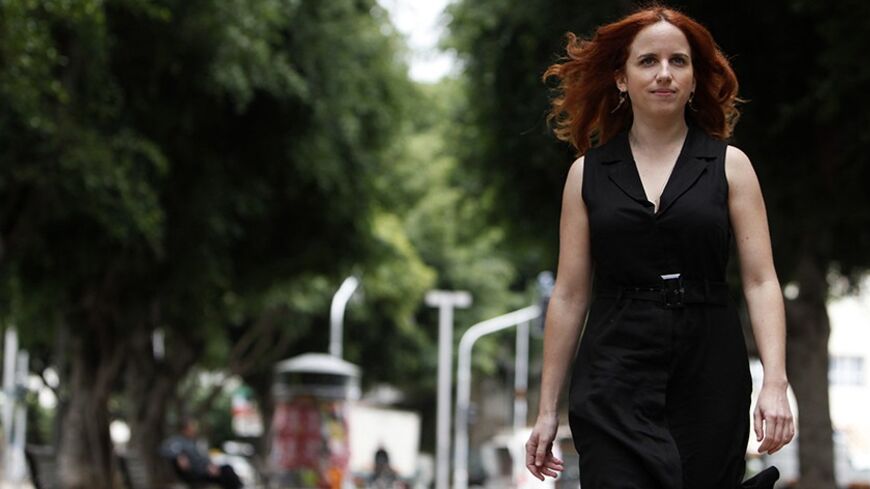 Stav Shaffir, who turns 29 in May, is the youngest member of the Knesset. Yet she rounds out March with an impressive record of parliamentary achievements. First, she established a new parliamentary lobby to defend the rights of people renting apartments, and became one of the lobby’s leaders. This was followed by a decision from the Housing Cabinet, led by Finance Minister Yair Lapid, to adopt her proposed “fair rental” law.

Shaffir was a main hero of summer 2011's tent protests, which erupted because of the housing crisis facing her and her fellow students. Since then, she has become an especially prominent Knesset member for the Labor Party, notably on the Finance Committee, where she operates as a guerrilla warrior for social issues. Like a girl in a candy store, Shaffir is amazed at the secrets she discovered when she decided to “follow the money.” According to her, she found most of it across the Green Line.

In an interview with Al-Monitor she explains why the prime minister and his Cabinet will have to adapt to the demands of her generation: “We are the generation of Google and Facebook. We know what is happening in the world, and we can’t accept a situation in which information is being hidden from us.”

Al-Monitor: So, is that what happened to Finance Minister Yair Lapid this week? He realized that if he doesn’t do something big to burst the real estate bubble, he would disappear?

Shaffir: Of course. It took Yair Lapid a very long time to understand why he was elected and why he managed to get so many of the social protest votes. When he started dropping in the polls, he realized that something dramatic had to be done to improve the lives of young people.

I had hoped that this is what would happen when I presented my plan to oversee rental costs several months ago. I do need the Finance Ministry on my side for my plan to be accepted. I am very pleased that Lapid decided to adopt the idea, because in the beginning, the treasury bureaucrats at the Finance Ministry told me that the plan is disconnected from the reality.

Until now, everything that Lapid said turned out to be a bluff. This was the first time that he actually realized that the public is not stupid. During my battles on the Finance Committee against the transfer of funds, I understood how smart the public really is.

Shaffir: I spent a few months on the Finance Committee acting like a student. I got there when I was 27 years old, and I was seated next to people who were very experienced. I tried to learn the system before I opened my mouth. Then, in July, the Knesset received the state budget. It was a disgraceful experience as far as I was concerned. I was shocked to see that the Finance Ministry was not obligated to show any transparency. Furthermore, I discovered that what they gave us wasn’t even the real budget. There’s another, secret budget, which I call the “con job budget.” [This] is the real budget, arriving before the committee through budgetary transfers.

What happens is they put a stack of papers in front of us with a list of budgetary transfers amounting to 18 billion shekels [about $5.2 billion]. I started to check what they were, and I realized that the Finance Ministry was counting on the fact that the Knesset members have no idea what they are voting for. We are talking about changes to the state budget amounting to billions of shekels. It’s amazing. There’s a budget that determines what the government’s priorities are — what goes to welfare, security, the settlements, etc. — and the Knesset can’t even begin to understand it. I asked myself what the whole business was really about, and then I started to fight against all of those budgetary transfers.

I put together a team of volunteers to investigate the budgetary transfers. We looked into every clause in the budget, and then we petitioned the Supreme Court. In the end, the Finance Ministry was convinced to give us the complete information.

Al-Monitor: What were you shocked about most, when you saw the “con job budget”?

Shaffir: The lies. The government announces that the Ministry of Defense is about to undergo a transformation to make it more efficient, and then, five minutes later, 5 billion shekels [around $1.4 billion] are transferred to it, quietly and behind closed doors. It’s also shocking that the government says that it is conducting negotiations to advance a diplomatic agreement, but at the same time it transfers 600 million shekels [$170 million] to the settlements over just four months. Or it says that it wants to invest in the periphery, but it doesn’t considered the [disadvantaged] towns of Kiryat Shmona or Sderot to be part of the periphery. It just means settlements across the Green Line, which receive a ridiculous amount of budgetary surpluses.

I find it shocking that the anti-poverty committee meets, while at the same time the Finance Ministry quietly uses that committee to transfer 1.5 billion shekels [more than $400,000] from social security to the Ministry of Defense without anyone knowing about it. Or, how they transferred 36 million shekels [more than $10 million] to Judea and Samaria as a security grant to compensate for the freeze in construction. Then, when you ask why at the committee, they tell you that there were gaps in municipal taxes, but a few weeks later you learn from a study by the Molad Center for the Renewal of Israeli Democracy that 80% of that money went to the settlement umbrella organization Yesha Council to be used for political propaganda.

The Finance Ministry simply sits in the committee and lies. You realize that the person who was once the secretary-general of the Yesha Council, Minister Naftali Bennett, now sits in the Ministry of Economy and Trade and completes that lie, while the person chairing the Knesset Finance Committee is a member of his party, Nissan Slomiansky, who is also lying to your face, and that the Minister of Housing Uri Ariel is also in on the lie, while Yair Lapid lets them do whatever they want. So you say to yourself, "What’s really going on here? How is it possible that there is such a huge budget without any supervision over it, and no one who is accountable for it?"

Al-Monitor: What are the priorities, based on the data that you discovered?

Shaffir: There are some things that are very obvious. One of these is the constant chipping away at social services. The treasury has secret funds within the budget with which it can always keep cutting away at the social ministries. The population is growing and getting older, but social services are getting smaller. Even the education budget, which is the second largest budget, the amount of money spent per child is low compared to Western nations. Social expenditures are really on the bottom, compared to the member states of the OECD [Organization for Economic Co-operation and Development]. Concerning the settlements, there is an unbelievable connection. Obviously, it is in the government’s interest to hide that budget. After all, what will people in Jerusalem say if they find out that the settlement of Elkana is getting several times as much money as them? Citizens rely on the government to distribute funds decently, but that doesn’t happen. The secret budget shows that small but powerful political interest groups come out the winners.

Al-Monitor: What was, until now, your most meaningful moment as a Knesset member and the most authentic representative of the protest movement?

Shaffir: When Yair Lapid and the Housing Ministry adopted the “fair rental” law. I consider that to be the point in which the protest movement entered politics. It was a moment in which a public struggle and a parliamentary struggle joined forces. It was an incredible moment.

Al-Monitor: Are there any circumstances in which social protests will break out again in Israel?

Shaffir: Yes, because it already happened. It’s impossible to know what will set off the next protest or when, but the unrest is there, because it never really ended. Despite what so many people believe, protest activity doesn’t end in a matter of months. It’s a process that takes years. Something opened up here, and we will continue to feel its impact for years. At some point we’ll be able to say that it really had an impact beyond just changing the nature of the public dialogue.

Al-Monitor: As a commentator on issues relating to the protests and as a member of the younger generation, what is it that the political leadership doesn’t yet understand?

Shaffir: That we are a generation that grew up in a different technological era, an era which grants us total free access to information compared to what our parents had. We are the generation of Google and Facebook. We can’t imagine a situation in which information is hidden from us and in which we have no access to other people around the world. In our world everything is accessible, and that includes access to solutions. Young Israelis see what is going on the world: what incredible public transportation Germany has, or what kind of loans students get in England, or the fact that school is free in France.

We are much more exposed to the problems, but we are just as exposed to the solutions. The feeling that we are entitled to information has created a lack of trust in government, not only in Israel, but everywhere that protests erupted. Citizens made progress, but their government is lagging behind in so many ways. The same is true with us. Our government is living in the past.