Israel to spend over $14 billion on defense in 2015, but where's it going? One Israeli MK vows to keep pressing for answers

In an interview with Al-Monitor, Knesset member Karin Elharrar, chair of the Knesset’s State Control Committee, says she's not intimidated by the country’s leading generals and vows to continue inspecting the defense budget and demanding more transparency and efficiency. 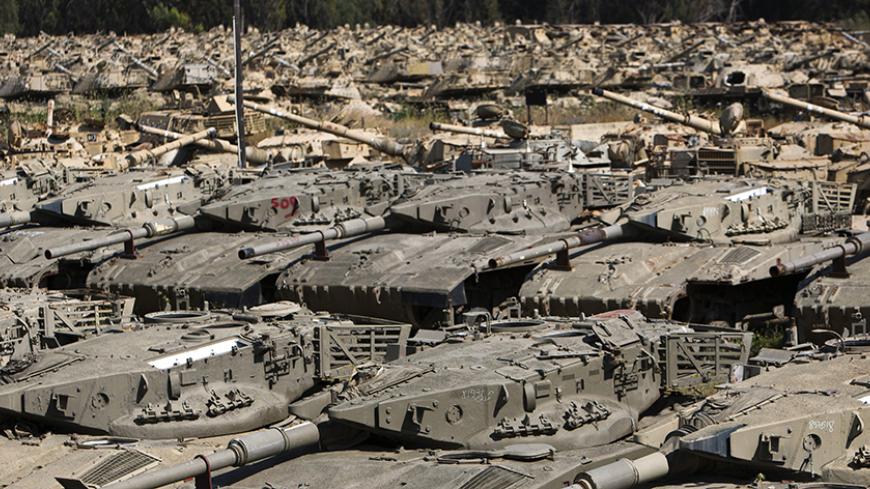 Old Israeli tanks lie in an armored vehicle "graveyard" at an Israeli army base near the southern town of Kiryat Gat, May 8, 2011. The field contains some 700 decommissioned armor the Israeli military uses in training exercises and for parts and scrap. - REUTERS/Amir Cohen

“A dialogue conducted like a monologue” is how the chair of the State Control Committee, Knesset member Karin Elharrar of the Yesh Atid Party, described a discussion she organized Aug. 16 to examine ways to make the defense budget more efficient. A very critical state comptroller’s report, released Aug. 5, noted that the wasteful defense establishment refused to become more efficient and that it systematically ignored any criticism it faced in various reports on the matter.

One of the people Elharrar invited to the meeting was the deputy chief of staff, Maj. Gen. Yair Golan. She was hoping to ask him what happened to the Defense Ministry’s enormous budget of more than 57 billion shekels (over $14 billion for 2015, which included a special addition to cover the 2014 Gaza war) if the great and powerful Israel Defense Forces has to ask for donations to buy weapons for its soldiers. But Golan never showed up, and the director general of the Ministry of Defense, reserve Maj. Gen. Dan Harel, was forced to provide answers instead. Of course, they did not satisfy Elharrar, but she does not intend to give up so easily. She is not intimidated, even if it is the case that when a young woman like her stands up to generals asking questions, their starting assumption is that she doesn’t really understand the issues at stake.

Elharrar is an attorney and the mother of a 2-year-old son. She has an MA in law, specializing in human rights and the rights of the disabled. Diagnosed with muscular dystrophy at 9 years old, the disease has progressed and she attends the Knesset in a wheelchair. It is only inevitable that much of her focus is on legislation to advance equality for the disabled, but she has also proven herself resolute and adept in other areas. For example, she is determined to introduce greater transparency to the defense budget and to prevent Prime Minister Benjamin Netanyahu from taking over public broadcasting. In an interview with Al-Monitor, she expressed her concern that we will soon see ​the prime minister trying to diminish the status of Channel 2 as well.

Al-Monitor:  What do you think is the most serious problem with the defense budget?

Elharrar:  The incredible and very disconcerting lack of transparency in that ministry. I realize that when it comes to security matters, certain things should not be public knowledge. On the other hand, there is absolutely no reason whatsoever for people with the highest security clearance, who are also insiders, to have no idea where the money is going. It is inconceivable that whenever cutting the defense budget comes up in state budget discussions, the military would say that they are being forced to cut training. Top defense officials come up with a different trick every time to prevent budget cuts, and they succeed. The 2007 Brodet Report got buried in 2014. In 2009, the State of Israel spent 150 million shekels [about $39 million] on the McKinsey Report, and they buried that too. Now they are doing the same thing to the Locker Report, which came out of the same flesh and blood as the defense establishment itself. I don’t intend to let up. With Israel in the state it is now, with insufficient funds for welfare and health and so many other things that are no less important than defense, we need to look through a microscope to see where the money is going. We now have the conclusions of the Locker Report. Not only are they important, in many ways they correspond to the state comptroller’s report.

Al-Monitor:  When you talk about this to senior officials in the defense establishment, do they ever make you feel like you are out of the loop just because you are a woman?

Elharrar:  I have no doubt whatsoever that at the very least, they raise an eyebrow and say, “What does she know?” But I can handle that. I do feel like I’m not part of the military’s top brass, and that I don’t speak their language, but at the same time, I think I have the skills and ability needed to critique them. Sometimes it takes an outsider to wipe away all the layers of dust on the reports.

Security threats do exist. It’s true that the neighborhood we live in is crazy. On the other hand, when we see that we need donations to equip the IDF’s troops with [armored personnel carriers] and [defensive shielding for armored vehicles], I think we have a problem. When we see that instead of cutting manpower, they ignore the reports’ conclusions and increase staffing instead, we have a problem. Then the defense establishment spins what is happening in an effort to scare the public, and they start cutting back on training.

When the State Control Committee held discussions about the preparedness of the reserves for a state of emergency, we discovered that when some soldiers show up for reserve duty, the army has no idea what to do with them. There isn’t enough equipment for them, and they don’t participate in drills and training in a timely manner. It is sheer bedlam because the entire system is inefficient and there is no transparency. If we had checked to see where the money is going, we would not have reached a point during Operation Protective Edge where our troops enter Gaza only to find out that there was a problem with equipment.

Al-Monitor:  Are you saying that it’s not just the public, and that even Knesset members know nothing about the defense budget?

Elharrar:  The situation is even worse than that. What I consider to be the most serious problem is that even the Finance Ministry knows nothing at all about it. I don’t understand why the Finance Ministry can know everything there is to know about the Mossad and Shin Bet, but nothing about the military establishment. I am not saying that the entire Budget Department has to be kept in the loop. One or two people would be enough, but there must be people in the know. I’m not at all sure that everyone in the defense establishment knows either. I get the feeling that senior members of the defense establishment are too busy defending themselves and proving that they have acted with propriety to think about what they can do to be more efficient. That’s too bad. When push comes to shove, no one wants to harm our defense establishment. We all want the best for it. We are citizens of Israel and we want security. As a citizen, however, I am under the impression that they are busy justifying their behavior instead of saying where they went wrong. It is not at all politically correct to say that the defense establishment has to become more efficient because defense is one of Israel’s sacred cows.

Elharrar:  Right now, the prime minister is actually trying very hard to get that law repealed. It was already obvious in his last term that he wasn’t too excited about it, but he voted for it anyway. Now he is trying to introduce all sorts of changes, ostensibly to improve it. I’m not against that. The biggest change that should have been made was to give more time to implement the law. On the other hand, he does not intend to appoint a public committee [for the creation of the new broadcasting corporation]. Why is that? Because he wants to ensure that he maintains supervision and control for himself. The person who will actually oversee the public broadcasting system will be a director-general with the power to hire employees. What will happen then? The prime minister will give the director-general instructions, and the director-general will do what he is told. In other words, we will have a broadcasting authority that is actually a branch of the prime minister’s office, serving as its mouthpiece. This means mass layoffs and the creation of an entirely different kind of body, staffed by Netanyahu’s people. That is very serious. He took all authority over the media for himself [by serving as communication minister], silenced all his coalition partners and revoked the television service fee in what was clearly a populist move. The fact that he revoked it is fine, but it should not have been done like that. At the same time, however, he also told the Finance Ministry, “I will not fund that luxury.” What I have noticed about the prime minister is that he likes people on their knees, waiting to die. He did that with Channel 10, which was only saved by a miracle, and he is doing it now with the Israel Broadcasting Authority. I suppose that he will soon do the same thing with Channel 2 as well.

Al-Monitor:  You are part of a party that was a big disappointment to the public. Do you feel like you are rehabilitating yourselves?

Elharrar:  Because of the government’s failures, I see and meet people who tell me, “I didn’t vote for you, and I’m sorry I didn’t. I wasted my vote.” I feel like the public misses [Yesh Atid leader Yair] Lapid. This government is doing a very good job helping us out for the next elections.