In an interview with Al-Monitor, Zionist Camp Knesset member Itzik Shmuli expresses his regret for the party's failure to reconnect with the periphery. 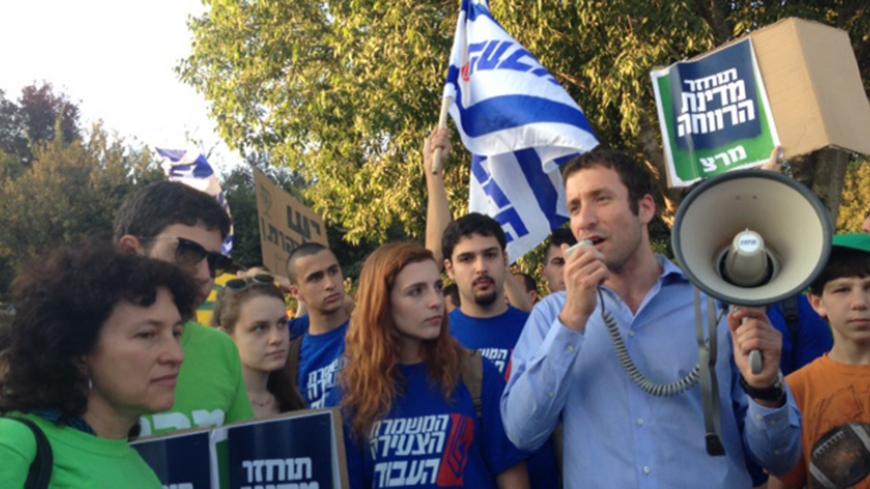 “These days, an outsider would be likely to think that [Yesh Atid head] Yair Lapid heads the opposition and not us. We pale in comparison to him because we are too busy explaining to ourselves and others that we are in the opposition and not on the way to join [Prime Minister Benjamin] Netanyahu’s government.” This post-election criticism of the Zionist Camp party was uttered by Knesset member Itzik Shmuli, one of the more prominent members on social issues in the party and in the Knesset in general. This indicates that tension is growing within the Zionist Camp and that pressures are being directed at its leader Isaac Herzog.

In a May 10 interview with Al-Monitor, Shmuli called on Herzog to lead the way in coming to a formal decision that the Zionist Camp faction will remain in the opposition until the next elections.

Shmuli, 35, one of the 2011 tent-social-protest leaders, was elected to the Knesset in 2013. For several years, he has been living in a falling apart public housing apartment in the city of Lod; he believes that if his fellow party members would spend more of their time in places such as these — poor urban neighborhoods and weakened communities in the social periphery — the election results would have been very different. He also explains under what conditions he would vote in favor of the reforms of the Finance Minister-designate, Kulanu Chairman Moshe Kahlon.

Al-Monitor:  Herzog repeatedly announces that you won’t sit in the coalition. Why isn’t that enough?

Shmuli:  The fact is, doubt remains. It has to be made clear that we are not willing to be the air freshener for Netanyahu’s policies, otherwise we’ll eat ourselves up inside and wake up only when we tie Lapid in the polls. We already see the results [of our inaction]. Instead of going on the offensive and doing what an opposition is supposed to do — to attack government policy when it is harmful — we are constantly busy explaining that we are really and truly the opposition. This is inflicting much damage on us and over time, we may be forced to pay for that a very painful political price.

There is no justification for sitting with Netanyahu [in the government]. This time, the right will have to manage without its obligatory babysitter. I support [former Minister] Amir Peretz’s proposal to make a formal decision not to sit with Bibi [Netanyahu]. Such a move will liberate us; otherwise, our inaction will be our undoing.

Al-Monitor:  What is the political import of the Zionist Camp’s recent lackluster behavior?

Shmuli:  I heard Yair Lapid this morning in his interview, when he said, "I am fighting alone. I am conducting a battle against the government’s disgraceful decision to enlarge the Cabinet, and Buji [Herzog] and his friends keep silent. Where are they?” That says everything. If we make it clear that we are the opposition, this will pull the rug out from under Lapid’s feet. We must do it immediately because the “equal share of the burden” bill [on obligatory draft for the ultra-Orthodox] will come up soon, and the Nahari Law [limiting the financing of ultra-Orthodox schools], followed by the state budget. I think that at some point we’ll have to wake up. I already see how the state budget is shaping up. No matter how you try to whitewash it, the real import of the coalition agreements is more money for the settlements and the rabbinical colleges and less for the periphery, from where I come. That means we have to go on the offensive. Either the faction as a faction will rise up to the plate, or individual members will do so. But there will be an offensive.

I, personally, will wait for no one. Regarding the last budget, which ultimately was not submitted to the Knesset, myself and my team submitted 10,000 objections and that’s what I’ll do this time, if it's a bad budget.

Al-Monitor:  And what if the government initiates measures that are consistent with your own positions, such as Kahlon’s reforms?

Shmuli:  We will support them. For example, if Kahlon implements steps that we think are correct, such as the idea of taxing real estate that he raised before he was taken aback by the reactions. I don’t understand what alarmed him so much. Part of the problem of high housing costs is not just that there aren’t enough [apartments], but that we, the young couples, compete with investors from abroad over the apartments that already exist. So part of what we can do to stop this is to impose taxation on those who acquire apartments as investments. I’m not talking about the ones who buy a second apartment for the children. Let’s talk about the third, fourth and fifth apartments. There is, for instance, someone here in Israel who owns 44 apartments. In addition, we need an inheritance tax, and of course all the tactics planned for the war against centralization of the banks and the credit companies.

We have to cast our votes in a pragmatic manner. We need to provide a security net for social-economic issues. The ultra-Orthodox factions, too. I hear the economic commentators shouting against the idea of "zero VAT on basic food products." I certainly think that that’s a great thing. That’s something we need to support. Also with regard to raising the salaries of the soldiers, it would be bad news if the Zionist Camp would oppose that. There is no moral validity for opposing it, even if Kahlon is the one to do it and also if Netanyahu is the one to do it. Not only should we vote in favor of such resolutions, we should also applaud them.

Al-Monitor:  Are these statements part of the lesson you’ve learned on a personal level, after you voted against Lapid’s "equal share of the burden" bill, even though it was an issue you yourself identified with?

Shmuli:  Yes, part of the business of being an elected representative is being honest with yourself and your constituents and being willing to recognize where you made mistakes. I am angry at myself for voting [against] the equal-burden sharing bill in the second and third plenum readings. Despite the fact that Lapid’s proposal was not good and was as full of holes as Swiss cheese, it had a certain symbolism that we, in the Zionist Camp, should have supported. But I didn’t want to embarrass my party chair Herzog so harshly, considering he had only started serving in his new role. Ultimately, the Zionist Camp paid a very steep price, in the elections as well, because others portrayed us as opposing the equal-burden sharing bill. As a Zionist party representing large swaths of the public, we should not drive ourselves into such corners. I also was beaten up over this, and I deserved it.

On the other hand, when they do not-such-good things like now, we’ll fight with everything we have. Like the frenzy of funneling funds to settlements in the Finance Committee, the postponement of the Nahari Law (in other words encouraging separatist education) and striving toward a reality of a binational state. They took national interests and sold them to the highest bidder. This is outright corruption. These are the places where we need to know how to deliver knock-out blows, and we’ll also do so.

Al-Monitor:  As someone who has lived in Lod in recent years, a city that traditionally supports the Likud Party, do you understand the Zionist Camp’s failure in connecting to the periphery?

Shmuli:  We have not succeeded in disconnecting ourselves from past mistakes. To stigmatize people as "mezuza kissers" and "those who prostrate themselves on graves of holy people" [reference to a derogatory saying by author Yair Garbuz about “amulet kissers and pagan worshipers”] — you can be a social-democrat, believing in the values of the Zionist Camp, and also kiss a mezuza. There are quite a number of people in my own family who do that. Ultimately, these elections are about where you feel you belong, where you connect. And in too many places people said to themselves, “I don’t belong to the Zionist Camp, despite my anger at Bibi [Netanyahu].”

It must be said that no other party in the last Knesset did as much for the periphery and the weaker socio-economic groups, as did the Zionist Camp. We were crowned as the most social-justice oriented party. I was recognized as the most socially-oriented Knesset member [in the index of the Social Guardian organization], mostly by virtue of our activities and legislative initiatives. But between facts and issues of identity and affiliation, lies a very deep chasm.

We have not yet cracked the hard nut of identity and affiliation, of belonging. How can it be accomplished? Among other things, by in-depth grass-roots work in the periphery. I look at my lawmaking in the Knesset, at least part of it — halting the water disconnections and integrating people with disabilities in the work force — is legislation that was born inside my apartment block in Lod. This is legislation that was born out of the day-to-day problems of people who approached me in the stairwells. Showing up only when another factory is closed does not constitute much of an effort. We have to be there [all the time], to live there.

When you only show up at election time and say, let’s establish a headquarters in the periphery, it gives the impression that we’re not exactly counting on them [periphery residents]. These are the places in which the Zionist Camp is still failing. These are the things that still infuriate me. We need to conduct an investigation and serious study of what happened in the elections. Maybe to set up a special committee on behalf of the party, and use this to continue further. It is very clear to me that our relationship with the social and geographic periphery needs to be much more long term and committed. Not only before elections.

We need to go to the most economically depressed places in Israeli society to try to turn on the light there. I intend to continue my activities there. Maybe this is not about two states for two nations or the Supreme Court, but in the end, a large share of our return to governing will pass through the problems of these people.