In an interview with Al-Monitor, Knesset member Stav Shafir blames coalition members in the concocting of a ''dirty deal'' where money will go to settlements instead of the southern localities. 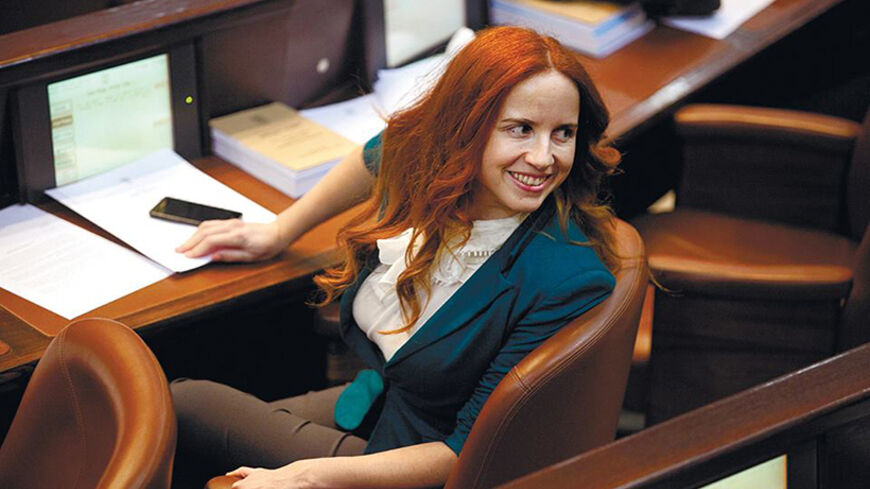 On the morning of Aug. 13, Knesset member Stav Shaffir (Labor) appeared at a meeting of the Knesset’s Finance Committee with one clear goal in mind: She wanted to force the committee’s chairman, Knesset member Nissan Slomiansky, to disclose ''the deal'' she contends was made between Slomiansky’s HaBayit HaYehudi party and the Yesh Atid party. Shaffir believes that in this deal, Finance Minister Yair Lapid, who is also the chairman of Yesh Atid, agreed to transfer tens of millions of shekels to West Bank settlements and religious councils. In exchange, Shaffir asserts, Slomiansky agreed to help get the “Zero VAT” bill passed by the committee. The law, which would reduce the VAT tax to zero on the purchase of new apartments, is Lapid’s flagship legislation.

Just one day earlier, Shaffir, who at 29 is the youngest member of Knesset, got into a serious scuffle with Slomiansky, a veteran politician from the religious right. From the sidelines, it looked like a clash between Israel’s new politics and the old politics.  Having earned a reputation as an icon of the social protest movement of 2011, Shaffir works night and day to uncover all sorts of shady budget dealings. Slomiansky on the other side, is an alumnus of the political old school, where it is customary to transfer money from one clause in the budget to the other, far from the prying eyes of the public.

On Aug. 12, Slomiansky convened the committee to approve the transfer of 3.8 billion shekels (about $1 billion) to the country’s defense budget following Operation Protective Edge. The members of the committee were told that to achieve this, 125 million shekels (some $36 million) would be cut from the public transportation budget. Shaffir refused to accept this and demanded explanations. She wanted to know why there was no representative from the Transportation Ministry at the meeting to answer any questions the committee might have. This led to an argument between her and Slomiansky, who finally ordered the Knesset’s ushers to remove her from the chamber. They argued again the following day. Shaffir accused Slomiansky of making a “dirty deal.” He told her that she was lying. 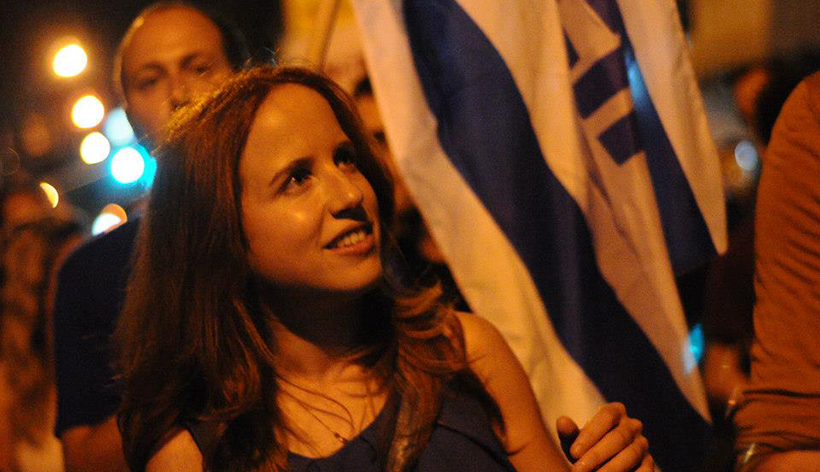 In an interview with Al-Monitor, Shaffir spoke about the last month, which she spent visiting the families of Israeli casualties of the campaign in Gaza. She described the many idealistic young men and women she met, who asked her to continue fighting in the Knesset against the old way of doing business. Shaffir sees herself, first and foremost, as the representative of an entire generation that the government simply doesn’t take into account. “Now they’re making cynical use of the security situation to transfer money to the settlements instead of to the towns and villages of the south,” she says.

Al-Monitor:  Are you sure that there’s a deal between Yesh Atid and HaBayit HaYehudi parties?

All I asked was that they disclose the deal, so that I could better understand what was going on behind the scenes, and why they are dealing such a blow to public transportation. But he would not answer me, because he is unwilling to tell the truth. The violent way he reacted to me only proves that he has something to hide.

I’ve been fighting this battle for a year now, and it was obvious to me that I was impinging on a system that serves the deal-makers behind the scenes. Without it they would have no platform to transfer billions of shekels from one part of the budget to another and to make all of their dirty deals.

All of this is going on while the towns and villages of the south have already been living under threat for the past 14 years, and now it has been discovered that there are assault tunnels running right under their homes. The children there are in dire need of therapy, yet not a single shekel has been transferred to them. I think it is disgraceful that we are failing to transfer money to the south. Our most pressing need is to bolster security in Sderot, Ashkelon, Nahal Oz and Kfar Aza. These are not economically strong communities. They are home largely to weaker populations, made up of new immigrants and the poor.

These settlements all need social budgets, social services and to rehabilitate local businesses. Any normal country would send social workers to every home in these places to see how the state can help the local population. Meanwhile, there is plenty of money for Judea and Samaria. It’s hideously hypocritical.

Al-Monitor:  You supported this war, together with the other members of the Labor Party.

Shaffir:  I try to look at each issue individually. I’m not part of those in the left who automatically oppose every military operation. It was impossible not to strike back [at Hamas], but at the same time, we have to examine what got us into this situation in the first place. After all, [Prime Minister Benjamin] Netanyahu was talking about eliminating Hamas as far back as 2009, and things have only gotten more complicated since then. At this very moment he’s conducting negotiations with that same Hamas. There’s no serious strategy, no matter where you look.

Al-Monitor:  Do you consider yourself to be the representative of the younger generation?

Shaffir: As long as we keep trudging along in place because of Netanyahu’s indecisiveness, it becomes apparent that this government has nothing to offer my generation. This government doesn’t think ahead. It doesn’t assure us our future, either security-wise or economically. Over the past few weeks, I went from home to home, visiting families who lost loved ones in Operation Protective Edge. I met lots of young people and lots of reservists, including people my own age. These are the incredible families of young people who sacrificed their lives. I saw all these young people, who are given nothing by the government. There’s no hope here. A diplomatic agreement would jumpstart the economy, and suddenly we’ll see hope on the horizon.

Al-Monitor:  Are you worried that the younger generation will pick up and leave?

Shaffir:  No. The vast majority of young people from this generation will keep fighting for our home. They want to live here, but after this war a change in government is necessary so that there will be hope. We’ll keep on fighting until then.

Al-Monitor: What is the current government promising this generation? What does it say lies on the horizon?

Shaffir: Deep down Netanyahu is laughing at anyone who joined the social protest movement. The coalition that he put together prevented any option for change. Netanyahu’s party is torpedoing any option for change, and he is more than happy to wrap himself up in that. As the members of his faction become more and more extreme, he appears more moderate, thus forced to change nothing. All of his ambitions can be summed up in maintaining the status quo. This can be seen from every angle you look at it: economically, socially and from a civic perspective. Have wages risen? No. They went down. Are there any attainable housing objectives? No. On the other hand, billions of shekels that were supposed to be used for public housing remain hidden, and no new apartments are being built. Are classrooms any smaller? Far from it, and education is actually getting more expensive. There are more people living in poverty now than there were when Netanyahu entered office. There is zero social mobility here. Is that a horizon? Is that a future?

Shaffir:  The absence of any diplomatic initiative is putting us in a situation where we are forced to go to war once a year. It happens time and again. The lack of initiative on our part and the absence of any diplomatic strategy are causing us to be dragged along passively. We find ourselves fighting wars of no choice, whenever the security of Israeli citizens is at risk, because we are unable to bring real quiet for any length of time. All of this is veiled in many lies by the government, which is looking for excuses so that it can avoid making any progress in the negotiations.

In the middle of negotiations with [Palestinian President] Mahmoud Abbas, the government said that he couldn’t be trusted because he doesn’t represent the entire Palestinian people. When he formed a coalition with Hamas, Netanyahu said that we could no longer talk to him because he was a partner with Hamas. Then Netanyahu said that he would eliminate Hamas. What happened in the end? Right now Netanyahu is conducting negotiations with Hamas instead, and this isn’t the first time he’s done that either. So what is all the empty talk about?

The government hasn’t really tried the diplomatic approach for years now. We haven’t had a bold prime minister to tell us, “I know it will be hard. I know that the Israeli public is battered and bruised after so many long years of lack of trust in the other side, after a decade of terrorist attacks and another decade of rockets. But I am telling you, this day will arrive.” That should be the message to the public, and that message should be backed up by deeds. There must be proof of how serious this effort is. It is important to meet with the partners of the Arab League initiative. Being really serious means freezing all construction in the territories during the negotiations. Being serious means firing those ministers who speak out against the negotiations, while an official delegation sent by the government is meeting with Mahmoud Abbas.

A construction freeze such as this would also make it possible to transfer large sums of money in the budget back to Israel, to pay for health, education, and welfare services.

My generation is strong. It won’t surrender easily. It doesn’t fold. The one thing that this generation needs more than anything else is hope. We need to know that our house is strong, and that the country feels a sense of responsibility toward us and toward our future.