Egypt's military said it was a "limited explosion." 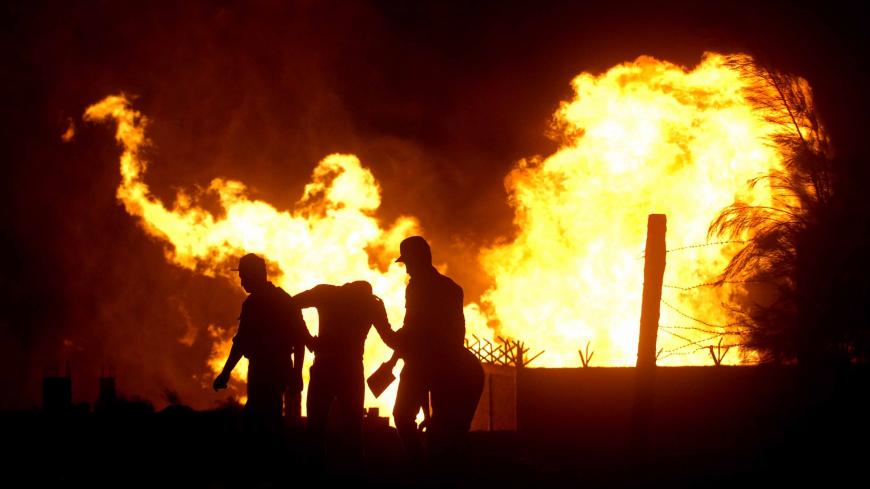 Egyptian security personnel stand in the vicinity of flames following an attack by saboteurs on an Egyptian gas pipeline on July 12, 2011, at el-Arish in the north of the Sinai Peninsula, the fourth time since February, cutting supplies to Israel and Jordan, the official Egyptian MENA news agency reported.

Egypt’s military said a “limited explosion” struck a gas pipeline in North Sinai on Thursday, an incident for which the Islamic State’s local branch has claimed credit.

The explosion took place near the town of el-Arish, in an area of the Sinai Peninsula that has continues to face an Islamist insurgency, despite the Egyptian military’s often brutal efforts in recent years to rout the fighters.

IS has not published evidence of its claims of responsibility for the explosion. A release by the group said its fighters had detonated improvised explosive devices along Egypt’s natural gas pipeline to Israel, causing “great material damage” to the line.

The extent of the damage was not immediately clear. Egyptian authorities reported the resulting fire has been extinguished.

In February, a similar act of sabotage was claimed by IS. While infrequent, such attacks can play an outsize role in regional dynamics.

Egypt previously exported natural gas to Israel via an underwater extension of the Arab Gas Pipeline.

The direction of the flow was later reversed under a new deal after an international court ordered that Egyptian companies pay $1.8 billion to Israel’s state-owned electricity company as a result of undelivered gas. Sabotage attacks on the pipeline following Egypt’s January Revolution in 2011 led the original deal to collapse.

Egypt’s General Intelligence Service may benefit from the new arrangement (the service is reported to have a majority stake in one of the companies that owns the pipeline), which is helping reduce Egypt's debt to Israel, which has made large natural gas discoveries in the eastern Mediterranean. Still, the newer deal has raised some muted controversy given that Cairo has huge gas reserves itself.